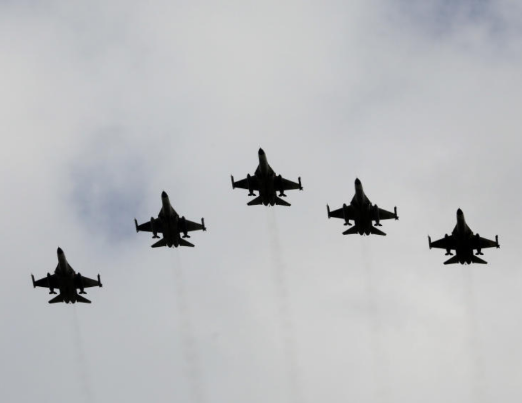 “Unfortunately, efforts are being made to create an imbalance in the region and to address this, a big addition has been made today to our defence system,” he said, apparently referring to India’s acquisition of Rafale fighter jets from France.

Imran Khan described it as a big movement for Pakistan after about 40 years when F-16 provided by the US were inducted into the Pakistan Air Force.

He also thanked China for providing the aircraft in a short span of about eight months when it often takes years to acquire modern jets.

In a veiled reference to India, Imran Khan said any country would have to think twice before harbouring any aggression towards Pakistan, asserting that the armed forces were well-equipped and trained to deal with any threat.

Chief of the Air Staff, Air Chief Marshal Zaheer Ahmed Babar Sidhu, said the JC-10 was a fully integrated weapon, avionic and combat system and its induction into the PAF would further strengthen its professional capabilities.

The new jet can be equipped with a bigger active electronically scanned array (AESA) radar than the one used by the JF-17 Block 3, and it can also carry more advanced, fourth-generation air-to-air missiles including the short-range PL-10 and the beyond-visual-range PL-15.

The J-10C is a 4.5-generation medium-sized fighter jet and is more powerful than the China-Pakistan jointly developed lightweight fighter jet, the JF-17, currently being used by the PAF.

Pakistan had announced the display of the new jet on March 23 at the annual Defence Day Parade. The exact number of aircraft provided by China so far is not known.

The minister told reporters in his home city of Rawalpindi that a full squadron of 25 all-weather aircraft comprising J-10C will attend the Pakistan Day ceremony on March 23 this year.

Many experts believe that the J-10C is Pakistan’s answer to the Rafale jets.

The J-10C aircraft were part of the Pak-China joint exercise in 2020, where experts from Pakistan had the opportunity to have a close look at the fighter jets. The joint exercises started on December 7 in Pakistan and lasted about 20 days, with China sending warplanes including J-10C, J-11B jets, KJ-500 early warning aircraft and Y-8 electronic warfare aircraft, while Pakistan participated with the JF-17 and Mirage III fighter jets.

Pakistan had a fleet of US-made F-16s but it was looking for a new multirole all-weather jet to augment its defence after India purchased Rafale jets from France.