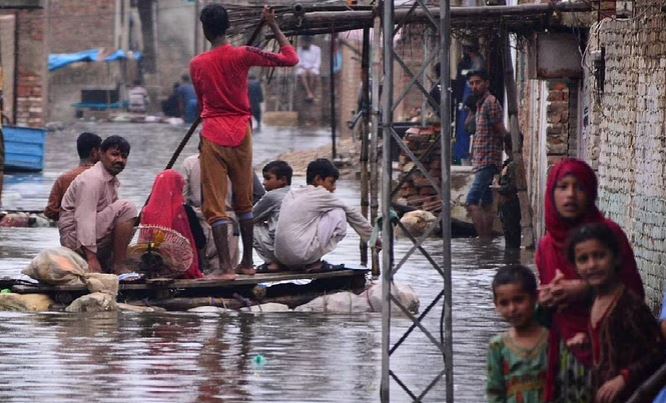 The official government figures show that more than 1300 people have been killed in the recent mega floods in Pakistan which are already going through a political storm of its own. The rain and flooding have caused more than 10 billion dollars in damage. This was a perfect storm in the making.

Higher than normal monthly temps in April, May, and June caused dry winds to rise up leaving a huge vacuum that was filled up by moisture-laden air from the Indian ocean and a cascade of rain fell on the country. What is seen today on the ground is a direct result of torrential rains compounded by melting glaciers; the climate catastrophe is wreaking havoc across the globe.

Europe is confronting its worst drought in 500 years; China is facing an unprecedented heatwave that has dried up rivers and lakes. The mayor of Jackson MS has urged residents to evacuate the city as it braces for more flooding. On a global scale, climate change is caused by variations in Jet streams, hot winds from Africa, and heating of the Atlantic Ocean leading to higher sea surface temperatures and rising temps in the Arctic region. Depleted water resources, wildfires, and heatwaves are directly caused by climate change and we need to pay close attention.

Pakistan Among the Top 10 Most Vulnerable Countries

Pakistan is among the top ten most vulnerable countries to climate change and the country has done little to prepare itself for dealing with natural disasters. Pakistanis have witnessed this tragedy just 12 years ago. Floods regularly occur on the Indus system, and it appears the government has done little preparation after the record floods of 2010 that killed thousands and displaced millions.

Sherry Rehman, Minister of Climate Change described the current floods as “Biblical and unprecedented”. These floods, no doubt, were massive in nature, but they were neither Biblical nor unprecedented. The recent devastating floods and the meager relief response by the government and civil society have exposed the country’s vulnerability to disaster management.

Pakistan incurs an annual loss of USD24 billion as a result of adverse impacts of climate change and environmental degradation. For a developing country like Pakistan, spending a fraction of that amount on devising local strategies to fight climate change could end up in very large dividends. The elephant in the room is obviously military spending. Pakistan is faced with a myriad of environmental hazards closely attributable to climate change.

Heatwaves are just one of the manifestations of the Holocene climate change that the earth is witnessing in the 21st century; 14 of the last 15 years have been the hottest in recorded history. Sea surface temperatures in the Indian Ocean are rising at rates much higher than the other oceans of the planet thereby changing the monsoon patterns.

This will inevitably give rise to another geologic hazard namely saltwater intrusion. In this case, saline water from the ocean will gradually replace freshwater aquifers along the Sindh and Balochistan coastlines affecting drinking water supplies and mangrove habitats. Groundwater table depletion has been witnessed throughout the country as there is no aquifer recharge and rainwater harvesting.

Attabad lake incident was caused by a Glacial Lake Outburst Flood (GLOF) as Pakistan hosts more than 7000 glaciers and anyone could pose a major threat. Floods, droughts, and desertification are already adversely affecting the livelihood of poor peasants all over the country. Pakistan has seen the worst loss to its vegetation canopy in the past three decades because of overpopulation, deforestation, and haphazard urbanisation.

Only 1.9% area of Pakistan is covered with forests while India has 23.8%. Reforestation campaigns have not produced any tangible results as they have been mainly focused on style rather than substance. Chronic air- and water-borne diseases are on the rise and can quickly become endemic or even pandemic in the face of inadequate healthcare facilities, especially in rural parts of the country. Diarrhea, skin infections, and other waterborne ailments are being widely reported in the country.

No Lessons Learnt from 2010 Floods

The 2010 floods in north Pakistan were the worst natural disaster in recorded history and scientists at the World Meteorological Organisation in Geneva said there is no doubt that higher sea surface temperatures contributed to the disaster.

Fresh Snowpacks, glacial melts, and unprecedented monsoon rains had caused flooding in the Indus River Basin since then on a yearly basis. This fact alone calls for an effective flood control system by building small and medium dams on the Indus and Kabul Rivers which will also help mitigate chronic power shortages in the country.

The general public is well aware of the dangers posed by climate change to their communities; however, the government’s perception needs a drastic makeover. A recent devastating heatwave in southern parts of the country killed more than 1200 people in less than a week. When category-4 tropical cyclone Nilofar was developing in the Indian Ocean in October 2014, it was clearly headed for the Karachi coastline.

When a female lawmaker turned the attention of Sindh Assembly Speaker Agha Siraj Durrani towards the impending danger, he declared on the Assembly floor that the tomb of Saint Abdullah Shah Ghazi will save Karachi from cyclone Nilofar. He also advised those who were “afraid of the cyclone” to move to interior Sindh. Predictably, no warnings were issued, and no assets were mobilised by the government. Had Nilofar made landfall on the Karachi coast, the damage to life and property would have been unimaginable? There is no continuation of policies to tackle climate change from one government to the next.

The ambitious National Climate Change Policy that was launched in March 2013 was shelved right after its launch. There is no budgetary allocation for the Climate ministry which is housed in the same building as it was in 2012, its only job is to coordinate climate change strategies and facilitate the stakeholders. Pakistani floods are a perfect storm of infrastructure failure and bad governance. There was no flood adaptation strategy after the 2010 floods. Major infrastructure projects are still being built on riverbeds. If you block the natural contours of the landscape, water will find a way to flow under gravity.

With enormous power line losses, there is no way Pakistan can remain dependent on its dwindling hydropower generation from large reservoirs which have already been silted up. Alternative energy resources are the only viable option for Pakistan to overcome its chronic energy shortages. Water is not an unlimited resource; freshwater aquifers are under severe strain and Pakistan will be a water-starved country in the next seven years. Long-term sustainable solutions involving adaptation and mitigation can help tackle the monster of climate change.

Fighting climate change will be a long, arduous road and the government will be well-advised to make it an integral part of school and college curriculum.

Disaster management departments of the government are fighting climate change by organising seminars and conferences which is a good start, but it is tantamount to barely scratching the surface of this behemoth issue.