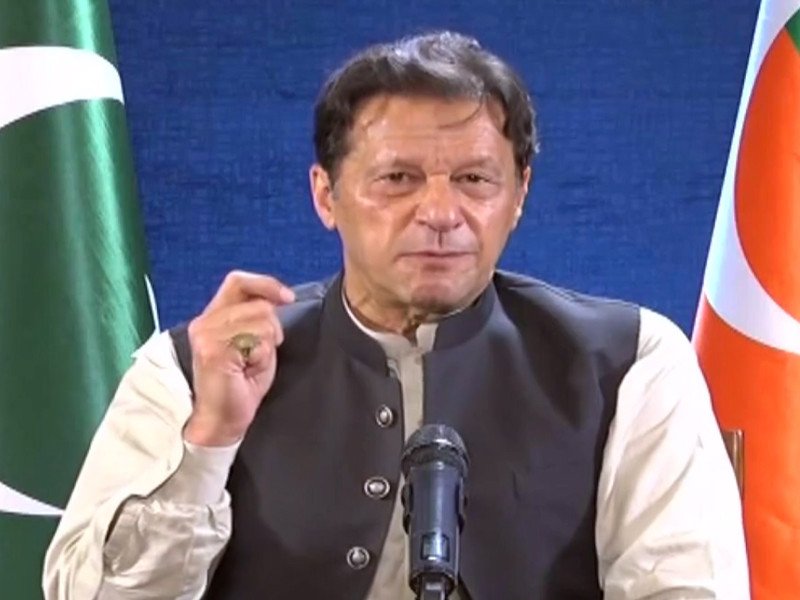 Pakistan’s media regulatory authority on Sunday clarified that it had imposed a ban on the live coverage of the speeches of former Pakistan Prime Minister Imran Khan alleging that he was spreading hate through his provocative statements against state institutions and officers which could disturb public peace.

The Pakistan Electronic Media Regulatory Authority (PEMRA) in its press release said, “It has been observed that Imran Khan, Chairman Pakistan Tehreek e-Insaf, in his speeches/statements, is continuously alleging state institutions by leveling baseless allegations and spreading hate speech through his provocative statements against state institutions and officers which is prejudicial to the maintenance of law and order and is likely to disturb public peace and tranquillity.”

The media watchdog, however, said that the recorded speeches of the former PM would only be permitted to be aired after an effective delay mechanism was put in place in order to ensure effective monitoring and editorial control in conformity with the PEMRA laws, the Frontier Post reported.

Furthermore, all satellite TV channels are directed to ensure that an impartial and independent Editorial Board be constituted as required under Clause 17 of Electronic Media (Programmes and Advertisement) Code of Conduct 2015 in order to ensure that their platform is not used by anyone for uttering remarks in any manner which are contemptuous and against any state institution and hateful, prejudicial to law and order situation in the country (in any manner even repeatedly in programs, talk shows, news bulletins),” the statement read.

Earlier, the PEMRA had issued the prohibition order on the telecast of live speeches of Imran Khan under section 27 of the PEMRA Ordinance 2002 as amended by PEMRA ( Amendment) Act 2007.

The media regulatory authority said that after analyzing the content of Imran’s speech, it has been observed that the content was aired live by the license holder channels without an effective time delay mechanism which was a violation of provisions of PEMRA laws and in disobedience of judgments passed by the honourable courts.

“The competent authority i.e. Chairman PEMRA in view of the above-mentioned background and reasons, in the exercise of delegated powers of the Authority vested in Section 27(a) of the PEMRA Ordinance 2002 as amended by PEMRA (Amendment) Act 2007, hereby prohibits the broadcast of live speech of Imran Khan on all satellite TV channels with immediate effect,” it said.

“We will not spare the IG and DIG,” he said while addressing the public gathering at Islamabad’s F-9 park.

The former Prime Minister called out Additional District and Sessions Judge Zeba Chaudhry, who last week had approved Gill’s two-day physical remand at the request of the capital police, and said she too should prepare herself as the case will also be registered against her, Geo News reported.

The PTI took out the rally in Islamabad in support of the incarcerated leader Shahbaz Gill, who the party said was subjected to alleged “gruesome torture” in police custody.

He further went on to say that if a case can be registered against Gill, then, Fazlur Rehman, Nawaz Sharif, and Rana Sanaullah will also face judicial proceedings. “They [coalition government] is trying to scare us by torturing Gill,” he said, adding that this is a “decisive moment” for the people of the country.

Khan maintained that what happened with Gill wasn’t because of what he said since coalition leaders in the government had “said much more than that to really deal damage to the army”.

Imran alleged that Gill was “caught and tortured” to send a message and frighten the people that if he could be broken mentally then anyone could, according to Geo News.

Imran’s close aide, Shahbaz Gill was arrested by the police on August 9 after he made controversial remarks against the Pakistan army on television that were deemed as “highly hateful and seditious” by the country’s media authority.