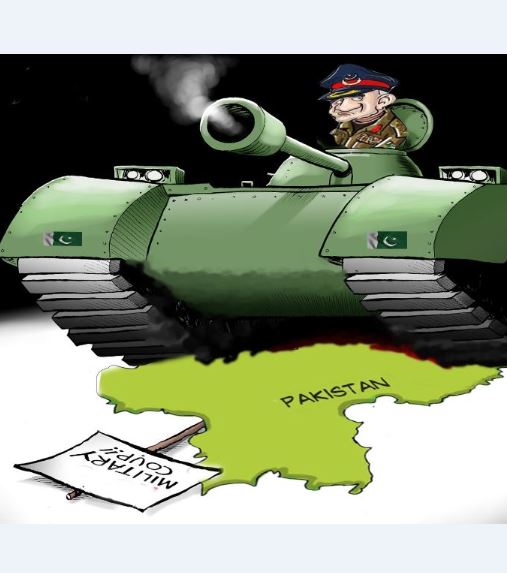 “Coup is knocking” has been the favourite mantra for Pakistani politicians over the years to gain power. Creating panic in the name of a coup is the best way to attain and stay in power even when a politician’s reign is encumbered with feeble governance, corruption, and mismanagement.  In fact, the ever-present sense of a possible coup in Pakistan is not only because the coup makers are ever ready, but even more because the politicians themselves provided room for military adventurism. The main reasons for military rule in Pakistan are political strife and lack of accountability. Over a period, the principles Doctrine of Necessity is being used in some or the other way to justify the actions of Military coup.

The Doctrine of Necessity: “ A perfect tool  and extra constitutional actions by administrative authority to restore order or attain power on the pretext of stability which also includes the ability of a private person to violate a law without punishment where the violation of law was necessary to prevent even worse harm”.

Immediately after its independence in 1947, Pakistan had to cope with countless hiccups; political settlements were no exception. Worse, founding father Quaid-E-Azam Muhammad Ali Jinnah died only a year after the country was established, which sparked an endless power sharing tussle among the politicians. Jinnah’s successors did not demonstrate the maturity required for the success of the democratic process. The newly born state was unable to make a constitution for nine years and in these years Pakistan went through four prime ministers, four governor generals, and one president. With no constitution and no political stability, the country was being governed on an ad hoc basis. Decision-making was in limbo, the government machinery was static, and activists of the freedom movement were disappointed with the shaky progress of political affairs. In initial years of independence, political tug of war was a nuisance for the state as a whole and the public suffered the brunt of the calamity which resulted in twisting and finding short cuts to gain absolute power and not realising that with great power comes the challenging responsibility. To enjoy the power placed at your doorstep you have to dedicate yourself to the position you are holding.

Nonexistence of Fundamental of Good Governance

Transparency and Accountability are two fundamental columns of good governance, yet not practiced religiously. Public opinion tends to place military men ahead of politicians when it comes to advocating for accountability, since the masses believe military pursues accountability without political interests. But it doesn’t mean that military adventurism is the only solution. Coups have served public expectations to a considerable extent but didn’t enable democratic norms to mature. Meanwhile, coups cause a lack of military professionalism, trample on human rights, and encourage a one man show at the top stage of politics

However, a coup cannot happen unless space is provided. Pakistani political parties and politicians have mostly adopted an opportunistic approach; their strategy has indeed debilitated democratic standards and strengthened the grounds for military invasions. Even after 75 years, hope for deliverance from these issues is missing from the manifestos of political parties — therefore the coups will keep knocking.

Instances of Coup D’état : The Game of Absolute Power

The Constitutional Coup 1953 as the Start Point

The Governor-General Ghulam Muhammad dismissed the government of the Prime Minister Khawaja Nazimuddin despite it enjoying the support of the Constituent Assembly of Pakistan and then in 1954 he dismissed the Constituent Assembly itself to prevent it changing the constitution to restrict the Governor-General’s powers as he never wanted his power and control to be curtailed.

The first Pakistani President Major General Isakander Mirza dismissed the Constituent Assembly and appointed Army Commander-in-Chief Gen Ayub Khan as the Chief martial law administrator with a mandate to keep law and order under check. Isakander Mirza had full faith on Ayub khan but was unaware of the game of attaining absolute power and ironically on thirteenth day Mirza was exiled by Gen Ayub Khan to appoint himself as president.

Prime Minister Zulfikar Ali forcefully retired seven army generals to promote Lieutenant-General Muhammad Zia-ul-Haq to four star rank in return Zulfikar Ali Bhutto became the first and only civilian Colonel Commandant of the Armoured Corps. But Bhutto forgot that power and greed attracts more power till it reaches its absolute position. Accordingly, Pakistan Chief of Army Staff General Muhammad Zia-ul-Haq made a blue print to attain absolute power and on 05 July 1977 under a code name of Operation Fair Play overthrew the government of Prime Minister Zulfikar Ali Bhutto with a promise of  “free and fair elections” within 90 days and which never happened in next 11 Years till his death in a plane crash in 1988 which finally brought the curtains down for Zia-ul-Haq.

The Big Bang by General Pervez Musharraf in 1999

After Kargil War, Sharif and General Musharraf held each other responsible for the actions in the Kargil, charging each other of lying and hiding details of war to the nation and with this as a backdrop there were widespread rumors of either possible military takeover or resignation of General Musharraf.

In October 1999, Prime Minister Sharif dismissed General Musharraf from the command of the military while he was official visit to Sri Lanka. Things did not end up here, Pakistan Civil Aviation Authority was ordered by Sharif to divert the General Musharraf flight to India and then to Nawabshah (Pak) and finally to land at Karachi airport only after Pak military police sealed the civilian airport and seized the control of the control tower. The military police also seized the control of the state-run media television and encircled the Prime Minister Secretariat building and cutting off the international phone lines.

Finally General Musharraf took over as Chief Executive only after detaining Sharif in a local prison. Musharraf declare a state of emergency and issued a Provisional Constitutional Order that ultimately suspended the writ of the Constitution of Pakistan and dissolved the National Assembly. However, General Musharraf strongly objected the wordage use of “martial law” or “coup d’état”, instead insisting that: “This is not martial law, only another path towards democracy. The ISPR also confirmed and played to the tunes of General Musharraf.

The first military coup of 1958, led by General Ayub Khan, has set up a pattern in Pakistan where today, most of the policy matters, such as the foreign or domestic are crafted with the tacit approval of the Pakistan military. The Pakistan military continues to dominate the government either directly at the center or indirectly in charge of several institutions. This core imbalance in civil-military affairs is primarily due to what Pakistan inherited at the time of the independence of Pakistan.

There will always be deficiencies within the governance systems that need debugging exercises and corrective actions. Transparency, accountability and responsibility in democratic governance can go a long way in stabilising under currents in Pakistan and protecting against total loss of democratic control by another military takeovers or game of attaining absolute power.