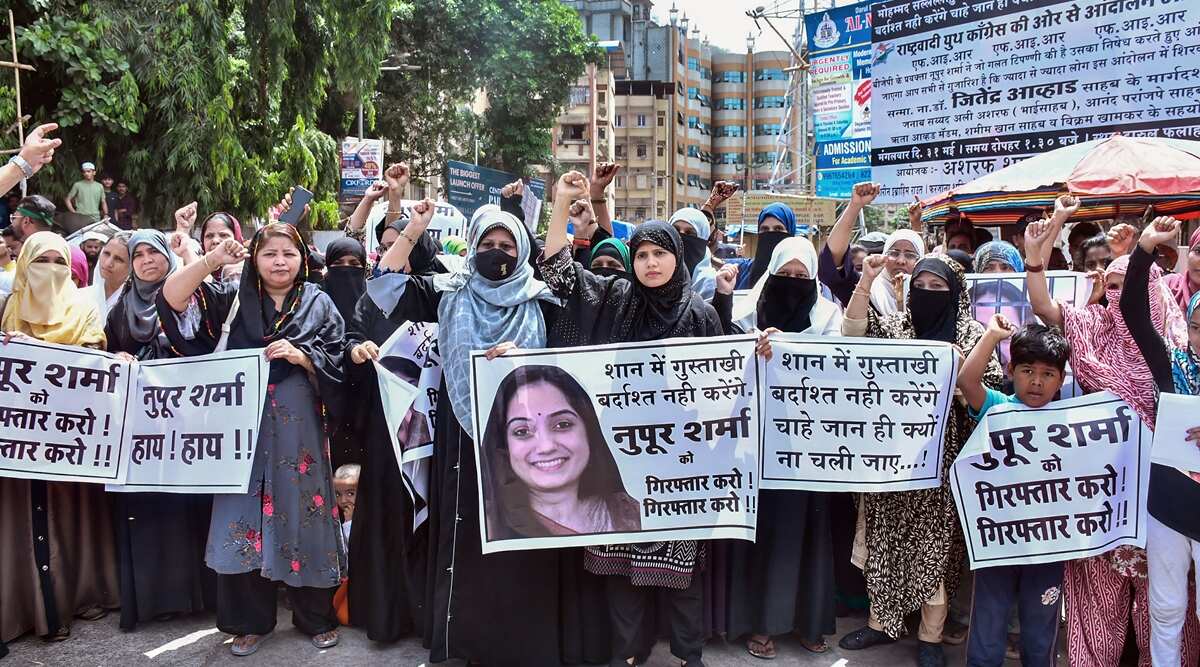 The Bharatiya Janata Party (BJP)-led government has been facing backlash from Gulf and other countries over the remarks made against Prophet Muhammed by its spokesperson Nupur Sharma and Delhi media head Naveen Kumar Jindal.

The foreign ministries of Kuwait, Qatar and Saudi Arabia issued official statements condemning the remarks and demanding an apology.

The BJP on its part has suspended Sharma and expelled Jindal while stating that it “respects all religions” and is “strongly against any ideology which insults or demeans any sect or religion”.

On Monday, Pakistan summoned the Indian chargé d’affaires over the remarks made by the BJP leaders. In a statement, the Foreign Office called the comments “totally unacceptable”, saying that they have “deeply hurt the sentiments” of Muslims across the world. The FO also told the Indian diplomat that it “deplores the belated and perfunctory disciplinary actions taken by the BJP government against the said officials, which cannot assuage the pain caused to the Muslims.”

On Monday, Saudi Arabia’s Ministry of Foreign Affairs welcomed the decision taken by the ruling party in suspending Sharma. The statement by the Ministry read: “The Ministry of Foreign Affairs expresses its condemnation and denunciation of the statements made by the spokeswoman of India’s ruling Bharatiya Janata Party. insulting Prophet Muhammed peace be upon him, and reaffirms its permanent rejection of prejudice against the symbols of the Islamic religion and refuses to prejudice all religious figures and symbols.”

The Ministry of Foreign Affairs of Qatar on Sunday summoned India’s Ambassador to hand an official note, expressing the country’s “total rejection of the statements of an official in the ruling party in India against the Prophet Mohammed.” The country has demanded a public apology to all Muslims in the world.

The spokesperson of the Minsiter also pointed out that “allowing such Islamophobic remarks to continue without punishment constitutes a grave danger to the protection of human rights and may lead to further prejudice and marginalization, which will create a cycle of violence and hate.”

The Foreign Ministry of Kuwait, too, handed a note to the Indian Ambassador, denouncing the remarks made by the BJP spokeswoman. The Ministry welcomed the suspension while demanding a public apology. In a statement similar to Qatar’s, the Ministry that such “hostile statements” if allowed to continue without any deterrence, “will increase extremism and hatred.”

The Taliban-ruled government in Afghanistan also condemned the “use of derogatory words against the Prophet of Islam”, news agency PTI said. In a tweet, spokesperson Zabihullah Mujahid said, “We urge the Indian government not to allow such fanatics to insult the holy religion of Islam and provoke the feelings of Muslims.”

Bahrain also welcomed the BJP’s decision to suspend Sharma, “stressing the need to denounce any reprehensible insults against the Prophet Muhammad PBUH, as a provocation to Muslims’ feelings and incitement to religious hatred,” a statement by its Foreign Minsitry read.

As reported by The Indian Express earlier, sources confirmed that Iran has also summoned the Indian Ambassador over the statements, however, Tehran is yet to issue an official statement.