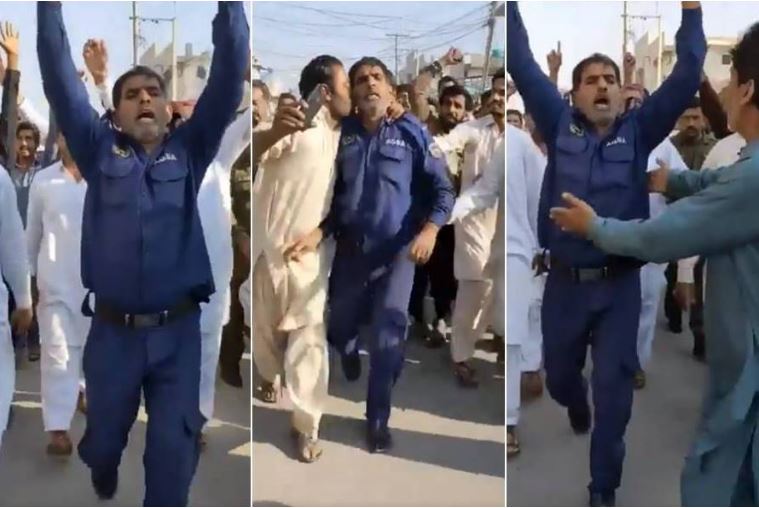 The trending hashtag #CivilWarinPakistan was clearly an exaggeration, but the havoc wreaked on the streets of Pakistan’s cities by the ‘Ashiqaan-e-Rasool’ (the lovers of Prophet Mohammad) did give the rest of the world an impression of Pakistan being a country at war with itself. What happened for much of last week in Pakistan, especially across Punjab and in Karachi wasn’t the first time that the Tehrik-e-Labbaik Pakistan (TLP) was taking to the streets and virtually bringing large parts of the country to a grinding halt. And despite the ban that has been imposed on what is now Pakistan’s biggest religious political party, the fourth largest political party (in terms of votes polled in the 2018 general elections) and the third largest political party in Punjab, the TLP and the extremist brand of Islam it represents and espouses isn’t going away anywhere.

While there is no shortage of extremists and fanatics in Pakistan, the TLP’s fanaticism stems from something so basic and emotional to every Muslim that not only is it able to mobilise hundreds of thousands of people, but even its detractors are forced to pay lip-service to the cause that the TLP espouses. The twin pillars on which TLP stands are Khatm-e-Nabuwwat (finality of prophethood) and Namoos-e-Risalat (honour of the Prophet of Islam) and its converse, Tauheen-e-Risalat (Blaspheming the Prophet of Islam). The TLP has weaponised and politicised both these concepts far more effectively than any other religious party in Pakistan. That TLP represents the majority Sunni Barelvi sect (also referred to as Sufis), who were traditionally seen as being more moderate, syncretic and heterodox compared to the puritanical Deobandi or Wahabi/Ahle Hadith Sunnis, also gives them a much bigger catchment area to tap. Add to this the fact that the mass support base of the TLP belongs to the marginalised, oppressed, mass of the underclass which for decades has been fed on a radical diet by the Pakistani State and the guardians of its ideological frontiers – Pakistan Army. The growing assertiveness and aggressiveness of the Barelvis, together with all the other elements giving the TLP heft both on the streets as well as at the hustings now makes for a deadly cocktail, or more appropriately, a political Molotov cocktail.

The TLP emerged from the agitation over the execution in 2016 of Mumtaz Qadri, the police guard who assassinated the Punjab Governor Salman Taseer in 2011. Since then, TLP has latched on to blasphemy and finality of Prophethood to build a mammoth support base. In 2017, it blocked the main artery linking Rawalpindi to Islamabad on the issue of a minor amendment in the declaration that election candidates had to make acknowledging the finality of Prophethood under the Election Act 2017. At that time, the TLP received open support from Imran Khan and covert support from the ‘deep state’ and ISI. A judicial inquiry exposed how TLP was encouraged to destabilise the then incumbent government of Nawaz Sharif’s Pakistan Muslim League (PMLN). The Faizabad Dharna of 2017 received support from most TV channels that were part of the military agenda to undermine the PMLN government and cut its conservative vote bank by giving the TLP a fillip.

In 2018, the TLP went berserk after the Supreme Court acquitted a Christian woman, Aasia Bibi, of the charge of blasphemy. There was widespread violence on the streets, highways were blocked, and much of the country came to a grinding halt. Blood curling threats were issued against the then chief justice and army chief Qamar Bajwa, who was also accused of being an Ahmadi. This was a red-line for the army which quickly moved against the TLP leadership. Both Khadim Rizvi and Pir Afzal Qadri were prosecuted and imprisoned. For some time it looked that it was curtains for TLP. But then after some months, both of them were released after they apologised and promised to behave. Khadim Rizvi stayed under the radar but continued to build the party’s base. How big the TLP support base was became known when Rizvi died suddenly last November. The funeral congregation was arguably the largest ever in Pakistan’s history, and left everyone in shock and awe. It was clear at that time that despite the crackdown by the military, TLP had grown massively.

The latest upsurge by TLP stems from last year when the party launched a protest against the re-publication of caricatures of the Prophet in France. At a huge rally in Karachi, the TLP laid down its demands: Among other things, severing diplomatic relations with France and boycotting all French goods. A week later, the TLP announced a march to the same Faizabad that three years earlier had catapulted it to national prominence. Once again, the Faizabad area was blocked by the agitators. And yet again, the government buckled and signed an agreement promising to expel the French ambassador in two to three months time after getting the proposal endorsed from Parliament. The TLP was also promised that sanctions would be imposed on French goods. Two days after this agreement was signed, Khadim Rizvi died. There were rumours at that time that he might not have died a natural death, but soon these also died. While there was some controversy over his successor, the mantle of the TLP was handed to his son Saad Rizvi.

Many people believed that after Khadim Rizvi, TLP would no longer be a force to reckon with. But while Saad did not have the fiery (and abusive if also earthy) oratorical skills of his father, he  more than made up for this with his more radical and aggressive approach. Just when everyone thought that the caricatures controversy was a thing of the past, in February, TLP threatened to resume its protests if the government didn’t honour its agreement. Imran Khan bought more temporary peace by promising to take the TLP agreement to Parliament by April 20. He also identified himself with the cause that TLP was agitating for and claimed that he had done more than anyone else to fight against blasphemy. A week before the deadline, Saad Rizvi was arrested and all hell broke loose.

A week later, despite the ban on TLP, arrest of its top leaders and hundreds of workers, and reports of dozens of casualties caused in firing by police and the para-military Rangers, the disturbances on the streets show no sign of ending. It is almost as if something has unhinged the TLP workers and their sympathisers. In a way, their agitation and insistence on their demands to take action against France have exposed the rank hypocrisy of the Pakistani elite – politicians, bureaucrats, clerics and military officials – who are ever ready to exploit Islam and emotions attached to the faith and its holy personalities, but never quite ready to put their money where their mouth is. This can be explained away as pragmatism, but is actually hypocrisy.

The thing is that the TLP cadre and other Islamists are merely demanding that the leaders of the country uphold the majesty and honour of Islam and its Prophet without making any compromise or striking any Faustian bargains. It is completely legitimate for them to ask what is the price that the rulers of Pakistan attach to the honour of the Prophet? After all when Imran Khan says that taking action against France won’t affect that country but will cause economic devastation and diplomatic isolation, is he saying that at this price Pakistan is ready to tolerate blasphemy against the Prophet? Given that many Pakistanis never tire of saying that they are willing to even sacrifice their children to uphold the honour of the Prophet, the plea that it cannot afford to take any action against France or some other country – Pakistan acquiesces to the genocide of Uyghurs because of the economic and military aid from China – sounds quite hollow. The fact that while the privileged elite isn’t ready to pay the price, the underclass, with nothing to lose, is ready to rise up and stake their lives for the cause of Islam, is at the heart of the conflict that is unfolding inside Pakistan. It is this disconnect between elitism and self-preservation on one hand, and on the other hand the Islamism that has been assiduously cultivated and nurtured by the Pakistani elite that is now coming home to roost.

Unlike the ruling class of Pakistan that uses Islam only for its own political and economic benefit, the TLP is committed to its cause. This commitment, together with its representing the dispossessed whom it has empowered and given a voice has been one of the factors behind its political rise. The growing political following of TLP is also what prompted efforts of the ruling Pakistan Tehrik-e-Insaaf (PTI) to try and woo it and have an electoral understanding with it. The interior minister Sheikh Rashid hinted as much in an interview. And after the arrest of Saad Rizvi, a top TLP leader revealed that PTI had offered not just lots of money and seats in the Senate but also a political alliance if it compromised on its demands against France. But the TLP refused to bite the bait and stuck to its guns.

As things stand, the government has failed to quell the protests. Despite banning TLP, the Interior Minister and Religious Affairs minister, are reported to be holding yet another round of talks with the leadership of the TLP. The Army, which has played a very dubious role in propping up TLP is also concerned over how the situation is unfolding. There are unconfirmed reports of soldiers and policemen deserting to join the ranks of TLP. Even if these reports are exaggerated, there is a concern of terrorist groups joining forces with TLP, creating a nightmarish situation. Until now, the TLP is not by any stretch of imagination a terrorist organisation. But this could change. Already the banned Tehrik-e-Taliban Pakistan (TTP) has offered to support the TLP. Mainstream religious parties like Jamiat Uema Islam of Maulana Fazlur Rehman has also offered to join the TLP if it held a Long March to press for its demands. The Jamaat Islami too has been sharply critical of the Imran Khan government’s handling of the crisis and backed the demands of TLP. The main opposition party, PMLN, has so far only criticised the government but desisted from provoking the TLP. But this could change, given that Imran Khan had no compunctions in supporting and instigating the TLP when he was in opposition. In fact, everything Imran Khan did while in opposition is now coming back to haunt him. Many Pakistani analysts are pointing out that TLP has done nothing that Imran Khan did not do, or threaten to do – block roads and highways, target law enforcement officials, and go on a rampage.

While it is entirely possible that the government will manage to somehow tide over the current crisis, the scenes of the last week and perhaps the next few days have done more damage to the geo-economic dreams of Gen. Bajwa and his army than anything else. There are now rumours that the failure of the Punjab government to handle the crisis will force the military to insist that Imran Khan gets rid of the Punjab chief minister Usman Buzdar. If that happens, it will be a huge blow to Imran Khan who was controlling Punjab by remote control after installing a dummy chief minister. But more worryingly for Imran Khan, there are also murmurs that if things cannot be brought under control, the military could even get rid of him. The shuffling of the deck will not, however, address the fundamental problem of how to put the Islamic genie back into the bottle.