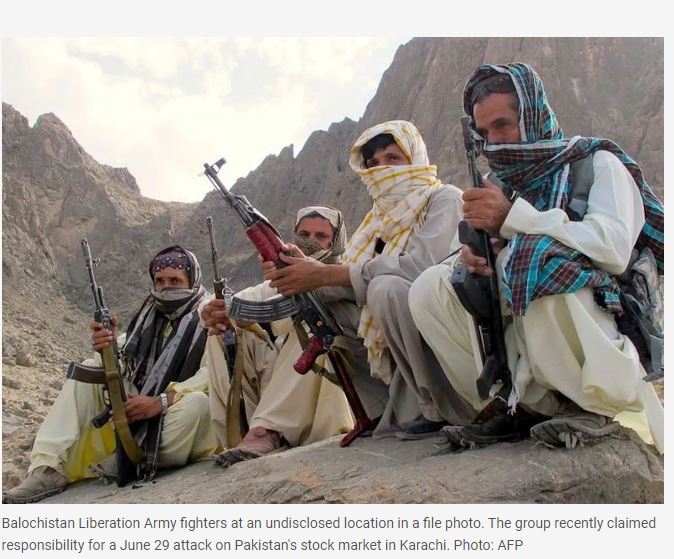 When Pakistani Prime Minister Imran Khan pledged recently to start talks with Balochistan’s entrenched and restive armed insurgents, it was not clear he was moved by the economically deprived and politically emasculated state of the nation’s largest province.

Nor was his outreach likely motivated by any assessment long-active Baloch insurgent groups had become too weak to continue their hit-and-run campaign.

Instead, his Pakistan Tehreek-e-Insaf (PTI) government appears to have belatedly awakened to the grave threat the rising Baloch insurgency poses to the China and Pakistan Economic Corridor (CPEC), and how the security and political situation in Balochistan could deteriorate in the wake of the Taliban’s resurgence in next-door Afghanistan.

The province, with its strategic port of Gwadar where China is pouring in billions of dollars in investment funds, is a vital territory within the wider US$60 billion CPEC.

At the same time, Balochistan has also historically been a secure political base for the Afghan Taliban’s leadership, or Quetta Shura, and is now arguably turning into a confluence area of religiously inspired militancy and long-standing ethnic insurgency.

This makes it an extraordinarily sensitive region for Pakistan, as widespread instability leaking out of Afghanistan could provide new fuel for disgruntled Baloch groups to revamp their militias and up their separatist campaign.

While rooted in grievances against the Pakistani state, insurgents have recently targeted Chinese nationals and the CPEC more broadly as associated with Islamabad.

Many analysts and political leaders in Pakistan believe widespread militant and ethnic insurgency could ultimately force China out of Balochistan, which would deal a serious blow to Pakistan’s efforts to revamp its economy.

That campaign is ramping up. Two Pakistan military personnel, including a captain, were killed on July 15 in a blast in Balochistan’s Pasni district, 126 kilometers east of the Gwadar port.

On July 14, a separate bus blast in Pakistan’s Khyber Pakhtunkhwa province killed at least 13 people, including nine Chinese nationals. While China was quick to call it a bomb attack, Pakistani authorities continue to insist that it was a vehicle failure.

On April 21, a car bomb at the luxury Serena Hotel in Quetta killed five people and injured 12. The Pakistan Taliban claimed responsibility and said police and other officials were the target.

While the Pakistan-based Tehreek-i-Taliban and Baloch insurgent groups do not share any ideological affinity, recent months have seen an increasing number of attacks by both groups on CPEC-related projects.

While the apparent bus attack in Khyber Pakhtunkhwa province highlights the Tehreek-i-Taliban’s focus on the CPEC, Baloch insurgents, too, see CPEC as manifesting and perpetuating what they view as “Chinese imperialism” in Balochistan, which they claim comes at the expense of the indigenous population.

The attack was a manifestation of the somewhat newly formed Baloch National Freedom Movement’s anti-CPEC focus.

Continuing the trend, at least 14 security men including seven personnel of the Frontier Corps were killed in October 2020 in an armed attack on their convoy on the coastal highway in the Ormara area of Gwadar district.

To be sure, Baloch insurgent groups are not the only group targeting the province. In recent months, there have been at least a dozen attacks in Balochistan by the Tehreek-i-Taliban, underscoring how the province’s security situation is deteriorating in the wake of Afghanistan’s intensifying civil war.

On July 14, a widely shared video on social and digital media showed a pro-Taliban rally in Balochistan’s capital, Quetta. With people carrying guns and praising Taliban victories in Afghanistan, the rally not only confirms a very visible Taliban presence in the province, but also shows the group’s growing tendency to project its power through political and militant means.

Some political leaders and security officials in Pakistan suggest the Taliban’s success in Afghanistan could actually augur well for Pakistan’s struggle against Baloch insurgents, as Pakistan could leverage its influence on the Taliban to force Afghanistan-based Baloch militant groups out of their territory.

However, the suggestion overlooks the fast-changing dynamics of Pakistan’s traditional ties with the Afghan Taliban.

In a recent private briefing given to parliament, Pakistan’s top military officials reportedly described the Tehreek-i-Taliban and the Afghan Taliban as two sides of the same coin, indicating a growing divergence between the two militant groups in the wake of Pakistan’s calculated distancing from a Taliban walkover in Afghanistan.

In the wake of growing militant activity in Balochistan, “it is rational for the government to try and make peace with at least one of the perpetrators,” a ruling party leader told Asia Times on the condition of anonymity.

A peace agreement with Baloch insurgents would greatly release security pressure on Pakistan and allow it instead to focus on the rising threat emerging from Afghanistan.

As such, Pakistan is considering including Beijing in its talks with Baloch militant groups, with a view to addressing the Baloch insurgent groups’ concerns about China’s control over their claimed resources, including the port of Gwadar.

But can Pakistan ensure this initiative does not end up as yet another entry on the long list of failed attempts to address Baloch concerns?

If the past is prologue, promises of development packages will not change Balochistan’s ground realities. As history shows, only by addressing the core Baloch demand for meaningful political, administrative and fiscal autonomy within the federation can Pakistan ameliorate the situation in a province that has been restive since its accession to Pakistan in 1948.

While Baloch nationalist, militant and political groups have long demanded de-militarization of the province, reconciliation with these groups at this stage – especially, if it addresses some of the core Baloch demands related to provincial autonomy – would allow Pakistan to deploy resources and forces to the rising threat of the Taliban’s religiously inspired transnational terrorism.

For the talks to succeed, Pakistan needs to engage genuine Baloch political leaders, not known state proxies, such as Shahzain Bugti, who have no real political rapport with Baloch insurgents. Instead, Islamabad must involve known Baloch leaders, including Dr Abdul Malik, Balochistan’s former chief minister and a known champion of provincial autonomy.