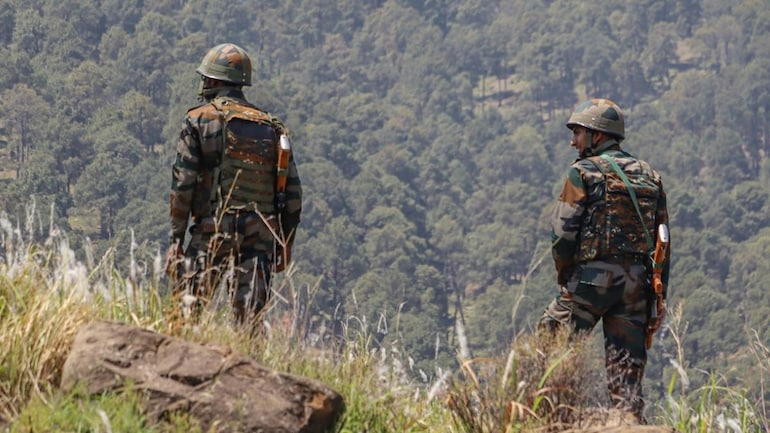 Security forces in Jammu and Kashmir have inputs that Pakistan has shifted terrorist launch pads near the Line of Control to push as many terrorists as possible into the Indian territory before the advent of winters. September – October has always been the peak months for the terrorists to cross over to the Kashmir region from across the border. After the first snowfall, these mountains are fully covered with feet of snow making it difficult for these terrorists to cross over. And that’s why before winter, Pakistan tries to send across as many terrorists as possible. There is a report as per the intercept of terrorist’s conversation that more than 6 launch pads are activated across the border and around 150 trained terrorists are ready to infiltration.
The security forces have received input that Pakistan has shifted these terror launch pads from the earlier locations. These launch pads were at least 4-5 km away from the LoC and now they have been shifted to half a kilometre distance from the Loc According to sources in security forces, these camps are very close to the Indian areas of Gurez, Neelam Valley, Keel, Tangdhar, Uri, Chakoti, Gulmarg, Poonch, Rajouri, Sunderbani and Nowshera sectors near the Line of Control of Jammu and Kashmir.
The Indian army has been put on high alert after receiving these inputs. The surveillance on the LoC has been increased. Indian army is carrying out day and night patrolling and keeping an eye with the help of the latest gadgetry like drones, night vigil cameras, PTZ and thermal imaging cameras.
”We have been provided with the best and latest arms and ammunition. Also, the new gadgetry due to which we can face any difficulty like dealing with terrorists or natural calamities. The new technology has helped us with keeping an eye on the enemy 24/7 and making sure that we don’t allow anyone to cross our side. And by our vigil, we make sure the infiltrators don’t get a chance to sneak in. We want to tell the citizens of our country that till the time we are securing these borders; they need not be afraid of anything. ”Manoj Kumar, Naib Subedar, Indian Army.
According to information received from sources in intelligence agencies, Pakistan has shifted the active training camps in the areas of Balakot, Gadi Habibullah, Chelabandi, Shawnala, Dulai, Sansa, Kotli, Gulpur, Fagosh, and Dubli near the LOC.
Jammu and Kashmir Police DG, Dilbagh Singh had earlier said that most of the infiltration bids by terrorists from across the border have been foiled. But there have been a couple of successful bids as well. He also said that the terrorists are now sending weapons and drugs to Jammu and Kashmir with the help of drones.
In the last two weeks, there have been many Infiltrations bid attempts by the terrorists from across the border. Around 8 terrorists were gunned down in these attempts at various locations near LoC and International Border. Reports also suggest that hundreds of rifles, pistols and arms and ammunition were sent from across the border with the help of drones. Security forces have recovered more than 200 pistols in the valley, which mostly were being used for civilian killings by the terror groups.
The Indian army soldiers guarding the Line of Control are leaving no scope for the terrorists to cross over. The soldiers say that if they are guarding the border, The citizens of the country need not worry.
Manoj Kumar, a Soldier, in the Indian Army said “We are far from our homes, but the Indian army is our home too. We live with each other being each other’s strength. If we believe in God and love our nation, then there is nothing difficult for the soldiers to carry out their task.” The Line of Control has been put on High alert. The security forces are making sure not to let anyone cross over to the Indian Territory.