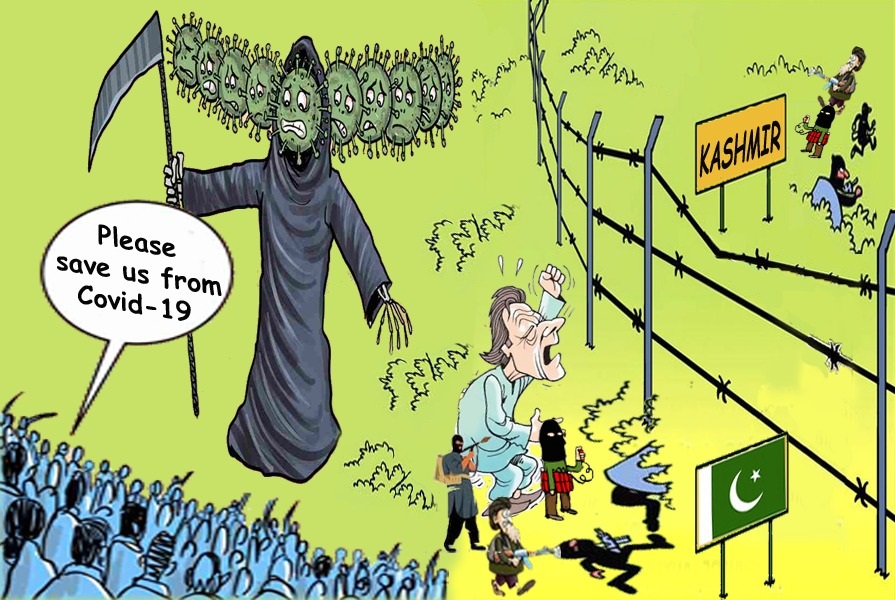 Like the fall of the Berlin Wall or the World War II, the Coronavirus pandemic is a world-shattering event whose far-ranging consequences we can only begin to imagine today. With thousands of deaths all across the world, this stands as a greatest threat to mankind as far as the challenges of medicine and health are concerned. But a greater threat to mankind has existed since time immemorial and humans are themselves responsible for that kind of virus – terrorism.

Where the world is still trying to make sense of the ground shifting beneath their feet as this crisis unfolds, Pakistan already has another strategy to suppress their panic related to this pandemic. With the Coronavirus pandemic spreading chaos everywhere, Pakistan Army is trying to take advantage of the crisis and push militants into Jammu and Kashmir. In recent days, several attempts have been made by the infiltrators with Pakistani Army giving them covering fire along the Line of Control (LoC) in Poonch and Rajouri districts of Jammu region. Sources said the Pakistan Army, anticipating that police and paramilitary personnel in the towns, as well as rural areas, are busy enforcing lockdown, is trying to take advantage of the situation and push militants into J&K.

Terror infrastructure and launch pads across the Line of Control (LoC) are active as Pakistan has upped efforts to push in terrorists into India, even as the world is focused on fighting the COVID-19 threat together. Terror factories in Pakistan are continuing training modules and launch pads along the border from where the final push is made to cross over are also active. There have been three infiltration attempts in the valley in the last one week.

The first encounter involved five PARA SF soldiers of the Indian Army sacrificing their lives while fighting terrorists in north Kashmir’s Kupwara district, the first major counter-infiltration operation along the LoC this year. This encounter in the Keran sector shows a clear Pakistan hand as the recovered items from the terrorists are clearly of Pakistani origin. Also, five terrorists were killed in this encounter. Five AK-47 rifles, grenades, GPS and wireless sets were recovered from the encounter site at Shalbatoo, Jumgund area of Keran sector, Kupwara in north Kashmir.

The group had infiltrated across the Line of Control (LoC) on April 1 from Qasim-II post in Pakistan-occupied Kashmir. They were on their way to the army’s Gulab Post when a squad of the Special Forces went after them.

A few days later four militants of Hizb-ul-Mujahideen were killed in a gunfight that raged between forces and militants in Hardmanguri, Khur-Batpora in Damhal Hanjipora belt of South Kashmir’s Kulgam district. Officials said that the gunfight ensued after a joint team of army’s 34 RR, CRPF 18 Bn and SOG J&K police laid a cordon around Hardmanguri village in the wee hours amid “specific information” about the presence of a group of militants there. In another incident, a paramilitary CRPF trooper was killed in a militant attack in the Bijbehara area of South Kashmiri’s Anantnag district.

And lastly, an encounter in Gulabad area of Sopore in Baramulla district on April 08 in which 22 Rashtriya Rifles (RR), Sopore Police and 179 Central Reserve Police Force (CRPF) carried out the operations.

A clear spike in cross-border firings— typically used to distract troops and cover infiltration attempts— has been observed last month, with the first six days of April seeing this continuing trend of violence. This, even as intelligence estimates show that local recruitment has fallen sharply this year, with only six Kashmiri youth being roped in by terrorist groups.

This operation clearly shows the complicity of Pakistan in aiding and abetting terrorism in the valley. This act is particularly reprehensible as the whole world is fighting Covid-19 and its aftermath and here is Pakistan, aiding and abetting infiltration. In terms of ceasefire violations, 1,197 incidents of cross-border firings by Pakistani troops have already been reported this year, with March alone seeing as many as 411 violations.

Officials pointed out that this is a big spike from last year when the month of March saw 267 violations. The desperation to push in Pakistani terrorists is perhaps linked to the decline in local recruitment by terror groups, possibly due to the clamp down in the valley that has restricted movements.

The encounter, and the multiple intelligence reports of Pakistan-based terror groups – Lashkar-e-Tayyiba and Jaish-e-Mohammed — assembling at launch pads across the Line of Control (LoC) in Jammu and Kashmir suggests that Islamabad is focused on fomenting trouble in Kashmir. For one, by radicalising the Kashmiri youth and then, getting them to cross over for training with jihadist groups like Lashkar-e-Tayebba, Jaish-e-Mohammed or the Hizbul Mujahideen and then infiltrate back to Jammu and Kashmir.

Besides, the Pakistani establishment is also trying to smuggle assault rifles across the LoC in order to supply to foreign and local terrorists already in the Valley. This assessment is also backed by the recent seizure of 13 AK-47 rifles, hand grenades and ammunition in Keran sector, Kupwara on March 23.

Apart from the Pakistani attempts to increase the level of violence in Kashmir in the coming months, Islamabad is also propping up indigenous armed groups like the Resistance Front and JK Pir Panjal Peace Forum to get back at India for nullifying the Article 370 in August 2019. The renewed attempts at infiltration are an attempt to boost the terrorist strength in Kashmir where 50 terrorists have been neutralised in the last three months.

Despite coronavirus pandemic this kind of an attempt by Pakistan to push terror into India is still continuing. Pakistan has very misplaced concept of priorities. Instead of focusing on how to tackle Coronavirus they are trying to push terrorists into the hinterland. It’s really very unfortunate that while the world is battling the coronavirus, Pakistan is still trying to push in terrorists and sabotage peace which clearly is an indication to the world community that how much they care for human rights. All words spoken by Imran Khan preaching about peace are hollow and have no meaning as they are hell bent even today to create mayhem in Kashmir valley. Even as the world battles the novel Coronavirus pandemic, Pakistan seems to be unwilling to shed its dirty tricks against India.