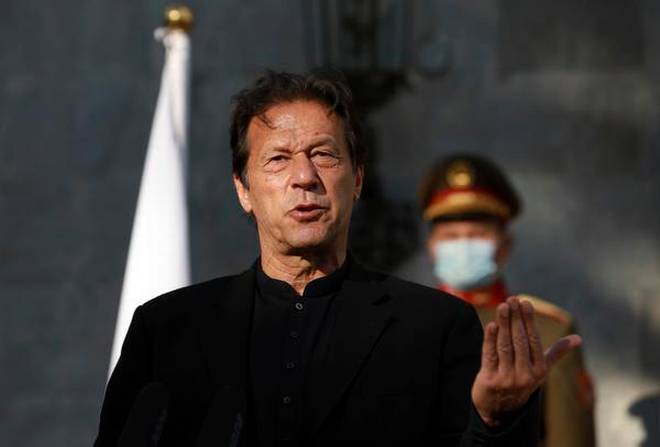 Imran Khan on Wednesday faced a barrage of questions at a hearing of the 2014 terror attack on an Army-run school during which the Supreme Court bench asked the Pakistan Prime Minister why he was negotiating with the culprits of the massacre of nearly 150 people, mostly students.

The apex court gave a month-long deadline to the government to determine the responsibility for security failure in the horrific attack in which 147 people, 132 of them children, were killed when Tehreek-e-Taliban Pakistan (TTP) militants stormed the Army Public School (APS) in Peshawar.

The court asked Mr. Khan about the action taken after a special commission in its probe presented to the court last year reported that security failure was responsible for the attack.

“The satisfaction of the parents [who lost their children in the APS attack] is necessary,” said Justice Ahsan addressing the premier.

The court also took the government to task for holding talks with the TTP instead of taking any action against those responsible for security failure.

“If the government was going to sign on a document of defeat with those who killed these children…Are we going to surrender once again?” Justice Amin asked the premier.

The government is in talks with the TTP over a “reconciliation process”, with Information Minister Fawad Chaudhry having announced on Monday that a “complete ceasefire” had been reached with the banned outfit.

“You are in power. The government is also yours. What did you do? You brought those guilty to the negotiating table,” Chief Justice Ahmed told Mr. Khan.

Mr. Khan in his response said that at the time of the attack his Pakistan Tehreek-e-Insaf party was ruling in Khyber-Pakhtunkhwa and it could only provide material compensation which it did by giving monetary support to the victims’ families.

The response angered the court and the Chief Justice remarked that the premier was rubbing salt on the wounds of the victims.

“Parents are asking where was the security system [that day]? Despite our comprehensive orders, nothing was done,” he was quoted as saying by the Dawn newspaper.

Mr. Khan then said that his government would take action against anyone if tasked by the court.

“There is no holy cow and action will be taken against any person in the light of court orders,” he said.

Information Minister Fawad Chaudhry told the media after hearing that the court set a four-week deadline for those who had a moral responsibility to stop the attack but failed to do so and the government would follow the directives.

Mr. Khan assured the bench that the government will fulfil the requirements of justice. The apex court, in turn, directed the Prime Minister to ensure the implementation of its October 20 verdict.

The Prime Minister told the bench that he had met the parents of the deceased children before, adding that he would continue to do it in the future.

“Find out why 80,000 people were killed. Also, find out who is responsible for 480 drone attacks taking place in Pakistan,” Mr. Khan was quoted as saying by Geo News.

Mr. Khan told the Supreme Court judges that they can constitute a high-level commission on the APS tragedy.

“We have already formed a commission and it has issued a report as well. Our order of October 20 states clearly that the government should find out who is responsible for the massacre and take action against them,” responded the Chief Justice.

The Chief Justice reminded the Prime Minister that seven years had passed since the tragedy took place.

During the last hearing, the Supreme Court bench had directed the Attorney General to inform the court about the steps taken by the government to redress the grievances of the parents of children martyred in the attack on APS on December 16, 2014.

In Wednesday’s hearing, the Chief Justice asked Attorney General (AG) Khalid Jawed Khan whether the Prime Minister had read the court’s order in which he had directed the AG to take action on the complaints of the victims’ parents.

The AG informed the court that the order had not been sent to the premier, adding that he would inform Prime Minister Khan about it.

“Is this the level of seriousness?” the Chief Justice asked. “Call the Prime Minister, we will talk to him ourselves. This cannot go on,” he added.

Prime Minister Khan was accordingly informed about the court summon who appeared in due time to face an angry bench that grilled him for doing nothing to pacify the families of the victims.

The Attorney General, on behalf of the government, said that “we accept all our mistakes”.

Earlier, the court while hearing the Peshawar attack expressed displeasure at the response of the government to take action and satisfy the parents of the children who lost their lives.

The parents had demanded the registration of an FIR against those civilian and military officials who, they believe, were responsible for security measures at the school, at the last hearing, the Dawn newspaper reported.

During the proceedings on Wednesday, the Attorney General said, “FIR could not be registered against higher-ups.” “Where do the intelligence [agencies] disappear when it comes to the protection of their own citizens? “Was a case registered against the former army chief and others responsible?” the Chief Justice asked.

The Attorney General replied that the inquiry report did not find anything related to the former army chief and former director-general of the Inter-Services Intelligence (ISI).

At this, the Chief Justice remarked, “There is such a huge intelligence system in the country. Billions of rupees are spent on it. There is also a claim that we are the best intelligence agency in the world. So much is being spent on intelligence but the results are zero.”