Pakistan: The Mother of Terror 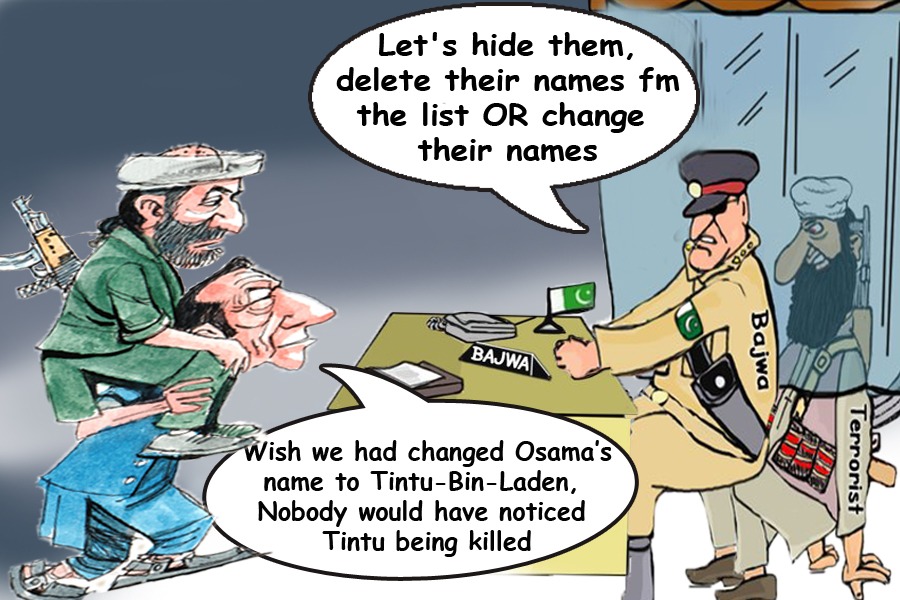 As FATF meets to take a call on Pakistan’s grey list status, experts know that cosmetic steps like banning terror groups, freezing bank accounts, etc will be taken by the Pak govt as paperwork to back their claims. But on the ground, these groups continue to operate with impunity and continue terrorizing the whole world.

In the process of Going Global: can FATF put the Brakes

It is a routine in Pakistan, to put all the notorious terrorists behind bar or they go missing before any FATF meeting. Similarly, last year before FATF plenary session, Pakistan cabinet minister Hammad Azhar, stated that the administration could not file an FIR against Masood Azhar as he has apparently gone missing. This is equally baffling, given the fact that terrorist groups are kept under ISI noose in Pakistan, mainly to provide them State Protection.

Over the last 3 decades, Pakistan has been sponsoring militancy in Afghanistan and Kashmir. Pakistan does openly support three prominent jihadi militant groups in Kashmir HeM(Hizb-ul-Mujahedeen), LeT(Lashkar-e-Taiba), JuD(Jamaat-ul-Dawa) & JeM(Jaisth-e-Mohammed). Even though these groups are officially banned by the Pakistani govt due to international pressures, but the terrorists of these groups roam freely in Pakistan.

Chief of the JeM terror outfit, Masood Azhar was listed as an international terrorist by the UNSC last year but the UN sanctions have made no difference. He continues to run his terror operations on social media too.

Recruitment on In Full Swing

A video of JuD emerged, of them addressing the “Tahaffuz Hurmat-e-Rasool Conference” (Conference of Protection of the Sanctity of Prophet Muhammad) at Muridke in Punjab on October 29, 2020. https://www.youtube.com/embed/u2pd4S2agDc?feature=oembed

In his address, Hamza praised the Chechen teenager that beheaded school teacher Samuel Paty in France on October 16.

This was because Paty showed a cartoon depiction of Muhammad, the founder of Islam, just for educational purposes.

In another example, a banner was found that was advertising the “Seerat Imam Azam Muhammad Rasoolullah Conference” (Conference on Life of Prophet Muhammad), which was held at the Jamia Masjid Salman Farsi in Abdul Rehman Town in Punjab on November 12, 2020.

The write-up was posted on social media on November 1, 2020.

The banner mentions that the event will be addressed by JuD, main Leaders Maulana Manzoor Ahmad and Maulana Khalid Saif-ul-Islam Wattoo.

The banner was posted on social media on November 2, 2020.

Another terrorist banner regarding the “Nida-e-Islam Conference” at Markaz Nida-e-Islam in Islampura in the Punbad Punjab for November 14, 2020, was found.

The banner mentions that the conference will be addressed by Maulana Manzoor Ahmed and Qari Bin Yamin Abid, known terrorist leaders of JuD.

In fact, several more banners advertising conferences by the terrorist organization were found in Pakistan after the FATF’s October warning.

A write-up titled “Achhi Khabrein” (Good News) by Jem Chief Maulana Masood Azhar said that rising cases of COVID-19 infection in the UK are the result of misadventures carried out by the country across the world against Muslima, and called for jihad against them. The same, according to him holds true for India.

The international community has a singular understanding of Pakistan, as a land where terrorists are groomed and nurtured. Most of the top terrorists are sheltered/found in Pakistan: Osama Bin Laden, Azhar Masood, Ehsanullah Ehsan amongst many others.

Islamabad attempts to portray itself as dealing with terrorism, attesting to the recent jailing of Lashkar-e-Tayyiba commander Zaki-ur-Rehman Lakhvi for 15 years and the arrest warrants for Jaish-e-Mohammed chief Masood Azhar, but this is nothing but a smokescreen.

Both were not charged for terrorist activities, once again demonstrating Pakistan is only cosmetically dealing with terrorism, something that is unlikely to fool FATF.

Who can forget, while in the heat of the Afghanistan war against the Taliban, Pakistan had the maniacal-radical verve, for the evacuation of about 5,000 of the top leadership of the Taliban and Al-Qaeda who were encircled by NATO forces in Afghanistan? Kunduz airlift. Also popularly called the “Airlift of Evil”, involved critical Pakistan Army-ISIS operation, wherein several Pakistani Air Force transport planes flew incessant sorties over a week, to safeguard its terror assets to be used later.

Is that what is on?

Pakistan doesn’t spare its neighbors, as Afghanistan and Iran stand witness to. Even Pakistan’s decades of benefactors are not spared.

At China’s behest, Pakistan is able to create a Yemeni terrorist network within Al-Qaeda that is operating far beyond the confines of the Arabian Peninsula. This network includes skilled bomb makers, martyrdom operatives, and senior commanders tightly ensconced with Al-Qaeda’s top leadership in the rugged terrains on the Pakistan-Afghanistan border. These individuals have demonstrated their remarkable ingenuity, tech-savvy skills, and deadly precision. They have been linked to some of the most severe attacks to take place in the Afghan-Pakistani region, including the dramatic suicide bombing in late December 2009 that killed seven agents from the Central Intelligence Agency and a Jordanian intelligence officer at an Afghan forward operating base.

Pakistan Army’s passion to organize, plan, raise funds, communicate, recruit, train, transit, and operate in relative secrecy and safety provided by itself and vide its control over Pakistani administrative milieu, is not hidden from the FATF and the world.

Only it grows firmer and sadly earnestly locomotive towards blacklisting, and more. But does is matter to Pakistani Generals, with their families lodged in posh properties and established business assets in the Americas and Europe?