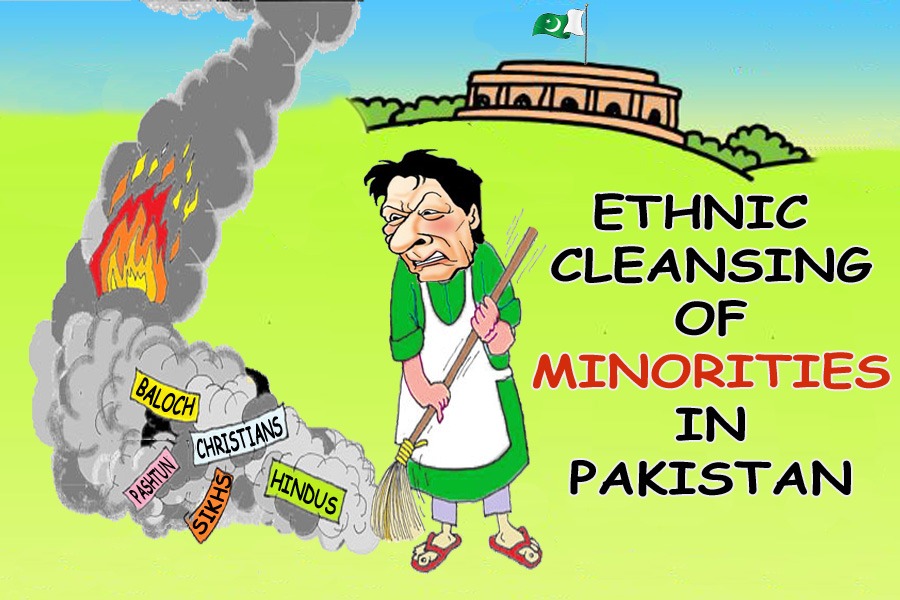 A Pakistani man on trial for blasphemy was shot dead in a courtroom in Peshawar, in the latest violent incident connected with the country’s blasphemy laws. Tahir Ahmed Naseem had been in prison since his arrest in 2018, allegedly after claiming he was a prophet. He is a member of the Ahmadi sect, which is persecuted in Pakistan where they have officially been declared non-Muslims.

Blasphemy laws in Pakistan have been the source of unwelcome attention for the government, as these laws have been seen as widely exploited and invoked against people of various religious minorities to settle scores in what almost invariably amounts to personal disputes.

Yet it is not just blasphemy laws that are repressive for Pakistan’s religious minorities. Cleansing Pakistan of minorities has been evident – and ongoing – since the partition from India and the creation of Pakistan. At the time of partition in 1947, almost 23 percent of Pakistan’s population was comprised of non-Muslim citizens. Today, the proportion of non-Muslims has declined to approximately 3 percent. The distinctions among Muslim denominations have also become far more accentuated over the years. Muslim groups such as the Shias who account for approximately 20-25 percent of Pakistan’s Muslim population, Ahmadis who have been declared non-Muslim by the writ of the state, and non-Muslim minorities such as Christians, Hindus, and Sikhs have been the targets of suicide bomb attacks on their neighbourhoods, had community members converted to Islam against their will, and had their houses of worship attacked and bombed even while they were inhabited by worshipers.

This process of targeting especially the Hindus (who still make up the largest religious minority in Pakistan), Christians, and other minority Muslims such as the Ahmadis, has directly correlated with the increased influence of hard-line Islam and the “Talibanization” of the country; something if not fully abated, then tacitly tolerated by each successive government.

Several events have taken place in the recent pasts which are indicative of the second-class treatment meted out to the religious minorities in Pakistan. One recent case was the fever pitch around the construction of a Hindu temple in Islamabad. When Pakistan’s former government allotted land for the Shri Krishna Mandir, or Krishna temple, in 2018, Muslim demonstrators quickly camped out on the plot, refusing to allow a Hindu structure to be built in their nation’s capital. Several clerics ruled that no Hindu temple should be built because Pakistan is a Muslim country. Finally a group of men destroyed the partially constructed wall around the temple’s land, claiming it was their Islamic duty to do so. Citizens denounced the government for using their taxes to provide funding for the temple. And media outlets openly campaigned to shut the project down.

In another incident, an NGO in Karachi had been refusing food assistance to Hindus and Christians, arguing that the aid was reserved for Muslims alone. News of the discriminatory incident went viral on Facebook after several families posted videos testifying about what happened. According to those testimonies, Christian and Hindu families were refused food aid by Saylani Welfare International Trust staffers who were distributing aid in Karachi in response to the COVID-19 crisis. The story brought into sharp focus the discrimination minorities in Pakistan often face due to their religious identities in the midst of crisis.

Most recently, the Ahmadi man who was shot & killed right inside the courtroom in Peshawar was one such example. Police arrested the accused but the question remains unanswered, how did he take the gun inside the courtroom?  And to add to the obloquy, Pakistan Tehreek-e-Insaf (PTI) leader Adil Haleem Sheikh even endorsed the murder by putting up the picture of the suspected shooter on his Facebook display.

What Pakistan does not realize however that by the occurrence of this event it has only intensified the international media glare upon itself as US has expressed “shock” and “outrage” at Pakistan and ‘urged Pakistan to immediately reform its often abused blasphemy laws and its court system, which allow such abuses to occur”.

Pakistan’s religious minorities are widely viewed as embattled or under attack. Year after year, the egregious assaults on religious minorities and their persecution have been documented by organisations like the Human Rights Commission of Pakistan (HRCP). For instance, in its latest report on the state of human rights in Pakistan, HRCP states: “religious minorities remained unable to enjoy the freedom of religion or belief guaranteed to them under the constitution. For the Ahmadiyya community in Punjab, this included the desecration of several sites of worship. Both the Hindu and Christian communities in Sindh and Punjab continued to report cases of forced conversion. The report goes on to add that “in recent years, however, the people from minority religions have been facing persecution, and the Hindu community is feeling insecure and vulnerable as they face antagonism and mob attacks over allegations of blasphemy. Kidnapping and forced conversion of Hindu girls are the main complaints of the Hindu community in Sindh.”

Even the graveyards of Christians and Ahmadis have not been spared. Regular reports of graves being excavated and vandalized appear in the press and via community reports. In Sindh and Balochistan provinces, well-to-do Hindus have been the primary targets of the ransom kidnappings. The numbers of minority Muslims and non-Muslims subjected to these purposeful attacks have increased significantly and the crimes committed have become more heinous. Those accused of “blasphemy” have sometimes been burnt alive outside police stations with no culprits identified or punished.

Religious minorities make up only about 4 percent of Pakistan’s total population, yet they feature prominently in news reports about the second-largest Muslim nation-state in the world. The atmosphere for minorities in Pakistan is usually portrayed as anything but peaceful. At the centre of the popular discourse on this topic lies an emphasis on everyday experiences of violence, discrimination, and exclusion. Issues range from a lack of access to education, sanitation, transportation, and health care, to occupational discrimination and more direct experiences of violence such as abductions and forced conversions, accusations of blasphemy, targeted killings, and frequent attacks on places of worship. This portrayal of religious minorities in Pakistan seems to suggest that little or no normal life is possible for them.

Pakistan has known for long that it has a serious image problem. It enjoys notoriety as a country which is a safe haven for all kinds of terrorists, a state that is mixed up with export of terrorism outside and encourages radical Islamism inside, a society that is deeply bigoted and sanctions the persecution of religious minorities, a hybrid polity in which political dissent is crushed, media is muzzled, and governments are ‘selected’ by the military, not elected by the masses. As a country, state, and society, Pakistan is a place which neither respects or tolerates different faiths nor defends religious freedoms of minorities. And it is certainly not a place where human rights (including the right to freedom of expression and dissent), and political rights of citizens are protected.