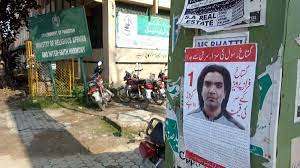 As Muslims all over the world celebrated Eid-ul-Adha, blasphemy charges rained in Pakistan. Some were prohibited from offering animal sacrifices by the State, while others became self-proclaimed chowkidars of the State-sanctioned prohibition. Blasphemy, once weaponised by the State against political opponents, activists, and dissenters of its policies, is now a weapon being used at will.

For the Muslim majority in Pakistan, Eid is an important festival that is celebrated for days. But for State-declared non-Muslims, Eid is not theirs to celebrate. In the city of Faisalabad, three men from the Ahmadiyya community were arrested for sacrificing animals in their homes, and two others were booked for hurting the sentiments of Muslims under Section 298-C of the Pakistan Penal Code. These laws were curated to stop the Ahmadis from associating as Muslims faithfully.

While most people on Eid day are busy looking for a qasai (butcher), a section of devout Muslims made it their life’s purpose to hunt for Ahmadis trying to sacrifice animals. Even if that meant clambering over rooftops and filming the sacrifice within their four walls.

A video was enough to hurt the emotions of, blackmail, and harass a persecuted community. And that is what happened. Two other Ahmadis have been arrested in Sheikhupura and two arrested in Rabwah, while a crackdown to arrest six others continues.

Apart from animal sacrifices, before Eid, 53 Ahmadi graves in Gujranwala were desecrated, with epitaphs carrying Islamic verses removed. This has become a common feature with the police being party to it. Having declared Ahmadis ‘non-Muslims’ with the Second Amendment in 1974, Pakistan now considers being an Ahmadi such a crime that even their buried continue to fall prey to vandalism in the garb of blasphemy. Pakistan’s first Nobel Laureate, Dr Abdus Salam’s grave in Rabwah, was defaced on government orders and the word ‘Muslim’ was removed from his epitaph.

Last week, a Christian mechanic was handed a death sentence under Section 295-C by a trial court in Lahore. Ashfaq Masih had an argument with a customer in 2017, who was refusing to pay him PKR 40 for a bicycle repair job. He was accused of disrespecting the prophet Muhammad for allegedly saying that for Christians, Jesus is the final prophet.

It’s a charge he has denied. Maish maintained that the rival shop owner, who was also the complainant, framed him for blasphemy because he wanted to take over his clients.

There’s also the case of blasphemy accusations against a Samsung employee for allegedly putting a WiFi device username that insulted the companion of the prophet. A mob in the mobile market in Karachi vandalised hoardings of Samsung; sectarian group Ahle Sunnat Wal Jamaat led protests and claimed credit for getting the ‘blasphemer’ arrested. Samsung, in its public statement, maintained neutrality on all religious matters. However, the incident led to online protests as well, with TikTokers burning Samsung smartphones and even smashing them with a hammer.

There is no end to the demand for blasphemy cases—now Shia leaders seek a blasphemy case against a Pakistan Muslim League (PML-N) leader for allegedly sitting next to the shrine of Bibi Pak Daman while wearing his shoes. This is much like when Tehreek-e-Labbaik supporters wanted Fawad Chaudhry to be booked for blasphemy for just standing outside Wazir Khan mosque, while the dhamal playing was considered an insult.

Weapons of the devout

History is a lesson no one wants to learn from. From the assassination of the former governor of Punjab Salman Taseer for calling man-made blasphemy laws “a black law”, to slain minister Shahbaz Bhatti standing up for blasphemy victim Asia Bibi and the shooting by Tehreek-e-Labbaik supporter of a PML-N minister in 2018 over a change in the election oath.

Settling personal grudges, vendettas and feuds are beneath the surface of most blasphemy allegations. Yet the state remains a bystander now—too weak to put the genie back into the bottle. Or so it seems.

Blasphemy has become the go-to weapon of the ‘devout’.

Television commentator Orya Maqbool Jan once narrated a certain professor’s dream, in which in the court of the prophet army chief General Qamar Javed Bajwa was handed over a file. Now in 2022, his interpretation of the same dream has changed—just like his feelings for Bajwa. He now questions the faith of the army chief and declares the dream didn’t mean Bajwa was religiously ordained to lead because using the Prophet’s name for one’s own agenda can be blasphemous on any given day.

A good mufti is now facing blasphemy charges for telling his audience that blasphemy laws are being misused, drawing comparisons to a wholesale market.

And all these good men of God would have once even cheered on as religious minorities were jailed, spending years in jail for acts of blasphemy they never committed. They would have frowned at the West for showing disdain for these laws in Pakistan. And they would have considered themselves untouchable to ever face such allegation. However, they forgot that chirag sabke bujhenge hawa kisi ki nahin.