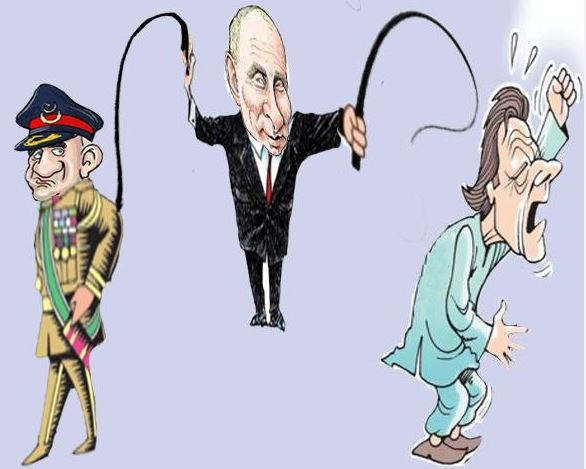 Pakistan’s Apathy and Unconcern for Sanctity of SCO

Pakistan gave a tight slap to Russia’s Chairmanship of SCO this year, in gross violation of SCO Charter, Article 2, which entails SCO member States to adhere to the principles of mutual respect of sovereignty, territorial integrity of states and inviolability of state border”.

Secretary of the National Security Council of Russia Nikolai Patrushev, sternly reprimanded Pakistan and made it clear that it doesn’t assist what Islamabad has done on a sly. India’s NSA Ajit Doval took a powerful exception to it and left the SCO NSA digital meet, after due “discussion” with the host, Russia who was in affirmation.

Undermining an International Forum for Petty Political Show at Home

While it is yet to be seen, despite being aware of the SCO constitution, was it an omission from Pakistan. If it was, then this gaffe shows that possibly Pakistan fails to be a nation-state of any sorts. Hence Baluchistan, Pashtun, and Kashmiri separatists have all the right to their demands, simply based on absence of aptitude of those in power.

What is more likely and what we would like to progress in this article, is possibility of an intentional Prank, on an international podium, while the world watching, Pakistan decides to ignore all nation’s efforts, while embarrassing itself.

Russia had to issue a statement that, he hoped Pakistan’s “provocative act will not affect India’s participation in SCO” and definitely not cast any shadow on Patrushev’s warm personal relationship with the Indian NSA, for whom he has the highest regard”.

This is not the first time Pakistan has gone ahead on a self-destructive spree. PM Modi was scheduled to attend the Eastern Economic Forum (EEF) as the chief guest last year, on President Putin’s invite.

However, Pakistan in its exuberance of projecting Imran Khan to its domestic audience, declared himself as Chief Guest. In an embarrassment to Islamabad, Russia had to officially clarify that Pakistan PM Imran Khan has not been invited for the Eastern Economic Forum (EEF) to be held in the Russian city of Vladivostok in early September, let alone be the Chef Guest.

Similar embarrassments cropped up, when Pakistan had the sword of Financial Action Task Force (FATF) blacklisting Pakistan for sponsoring terrorism hanging on its head. Several of Pakistani harbored and paid terrorists including Hafeez Mohd Syed and Maulana Masood Azhar had already been designated as Global Terrorists.

In a bizarre move, Pakistan moved to United Nations Security Council, to designate three Indian citizens as Global Terrorists, after Pakistan fabricated a fake claim, that these Indian citizens were involved in supporting terrorism in Pakistan. Pakistan out of frustration and in order to hide its failures to follow the guidelines given by FATF, had fabricated this inexplicable cacophony, and got ridiculed on world stage.

On April 26, 1996, in Shanghai of the Treaty on Deepening Military Trust in Border Regions, Kazakhstan, China, Kyrgyzstan, Russia, and Tajikistan formed the Shanghai Five. Both Moscow and Beijing viewed the then newly independent Central Asian republics not only as a cause of concern but also as an opportunity.

Within a year of its formation, the bloc signed the Treaty on Reduction of Military Forces in Border Regions, yet the world paid little attention until 2001 when Uzbekistan joined the grouping, whereby it was renamed the Shanghai Cooperation Organization. The June 2005 summit in Astana, Kazakhstan, caught international attention as Mongolia, Pakistan, Iran, and India were granted observer status.

Ever since, the member states have interacted trough focused groups on transportation, energy, telecommunications, military, and commerce. Though the organization’s prime focus is combating threats from non-state actors, including terrorism, separatism, and drug trafficking, However, with China’s increasing business poaching in Central Asia, Russian interest is transforming the SCO’s outlook. Russia started digressing towards EEF and got India involved in everything related to Central Asia.

What Russia had begun in 2014, when it was cordoned off from European markets, given Crimean Crisis, it had needed the SCO to further its economic interests, Look East was the order of the day.

However, since BRI based infiltration of China in its backyard and increasing  Chinese interference in Political space of these Central Asian Republics, saw Russia involving and appreciating the Indian balance from the south. Russia needed India, in a balancing act, and Pakistan, in a world class crass act, destroyed that, much to Russia’s annoyance.

In shadows of another FATF debacle

With the familiar dark clouds and sword of FATF blacklisting hanging ominously over its head, Pakistan’s Senate on Wednesday defeated yet another bill that sought to empower agencies investigating terrorist operations, in compliance with the requirements for terror financing watchdog FATF.

With this, the Upper House of parliament has now voted against four out of seven legislations moved by the Imran Khan government to comply with the Financial Action Task Force.

Despite human rights groups criticizing these legislations, apparently aimed at suspecting misuse by Pakistan Army, for persecuting innocent Baluchi and Pashtun separatists, this is a setback to the Pakistani government’s efforts, to get Pakistan out of FATF’s ‘grey list’ and to prevent it from going further down to a ‘black list’.

Pakistan government and Pakistan Army has no stand in its home soil. Increasingly facing discontent over ailing economy since last four years, squeezed due to FATF sword further slashing at the economic health, with Chinese profits in CPEC going back to Chinese banks, they turn towards coarse pranks of Map Doctoring, hurling abuses on PM Modi and making false claims on Kashmir.

Little they realise, getting few cheers here and there, from a controlled and subjugated media and cheers from their Radical Islamist Mullah based support group, does not hide the discontent public is harboring.

At other end of the stick, Pakistan’s stupidity has got it crossing path with Russian Bear. While Russia has been openly snubbing Pakistan since last two years, this has gone a bit too far, against the Russian interests. President Putin’s payback, shall be neither slim nor smooth, for Pakistan. Pakistan has not done any harm to India, but has ventured out with its snooty nose, right into the bear’s territory.