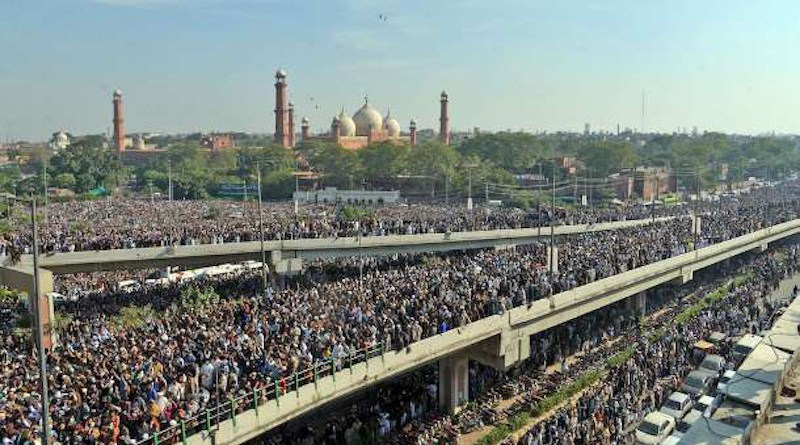 The Tehreek-e-Labbaik Pakistan (TLP) is a far-right Islamist party which in recent years has emerged as a major political force in Pakistan. The organisation claims that it is committed to defending the honour of the Prophet and effacing blasphemy in the country. In November last year, the TLP announced a long march under the banner of the ‘Tahafuz Namoos-i-Risalat’ from Rawalpindi to Islamabad to protest government inaction against France following the French President Emmanuel Macron’s defence of caricatures of the Prophet Muhammad.

The November agreement mandated that the parliament decides on the expulsion of the French ambassador within three months, not appoint its ambassador to France, release all TLP workers in custody and not register cases against the party’s leaders or workers after it disbands the sit-ins. As the three-month deadline approached on 16 February 2021, the party threatened the government with more demonstrations. Saad Hussain Rizvi, the newly appointed leader of the TLP declared, “We’re bound to honour the agreement till February 17. A war for (protecting) the honour of the Prophet has been waged. If someone has some misunderstanding, it must be removed as we pledge that there shall be no delay in taking a decision after February.”

A new round of negotiations ensued and concluded with an extension for the government to present its case to expel the French ambassador before parliament by 20 April 2021. But as this deadline also approached, Rizvi renewed his threats. His arrest on 12 April 2021 in No. 838 – 14 May  Lahore as a “pre-emptive measure” led to protests across multiple cities in Pakistan. The Ministry of Interior claimed that it had intelligence that Rizvi and his followers were planning attacks on 20 April 2021.

Fazlur Rehman, the leader of the influential Islamist party, the Jamiat Ulema-i-Islam, added pressure on the government after he threatened to join the protest if Rizvi was not released. As the death toll rose from the violence between party workers and the authorities, the government moved to ban the TLP as a proscribed outfit using powers conferred by Section 11B (1) of the Anti-Terrorism Act 1997 (XXVII of 1997). The Federal government argued that it held reasonable grounds to believe that the TLP was engaged in terrorism and acted in a manner prejudicial to the peace and security of the country.

While the TLP appears to fall somewhere in the opaque and murky ground between mainstream gradualist Islamist parties and radical religious groups in Pakistan, as the violent political arm of Barelvi Islam with a decidedly narrow focus on blasphemy and feet firmly planted in the realms of organised formal politics and mass street violence, it appears to be something new and altogether formidable. The federal government’s response to the TLP challenge has been to stall the movement with negotiations, deflect the issue stopping blasphemy to stopping Islamaphobia in Western countries and display an unusual ambivalence towards Islamist anger and violence.

Prime Minister Imran Khan has shown his support for the TLP, venerated its leadership and sympathised with its cause. He has gone so far as to maintain that the government and the TLP share the common goal in curbing blasphemy and the two differ only in their methods. Khan’s efforts to balance his goals of establishing interfaith harmony in Pakistan and abroad are directly at odds with his support for and approval of far-right rhetoric and grievances. His action and speeches on the issue serve only to embolden the TLP rather than to undermine it.