Persecution Of Hindus In Pakistan: 22 Year Old Hindu Girl Kidnapped, Converted To Islam And Married Off 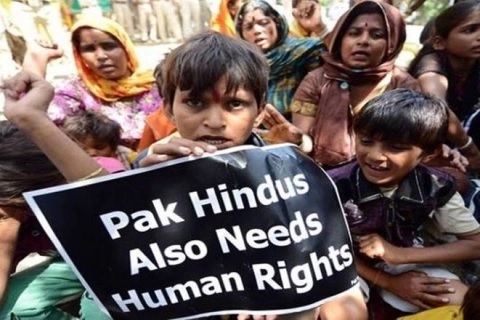 A 22 year old Hindu girl named Arti Bai who was kidnapped on Saturday (3 April) in Larkana of Pakistan was converted to Islam and married off to a man.

On Friday (9 April) Karachi based journalist Veengas posted a video on Twitter that showed Hindu community protesting for justice to the parents of the abducted girl. Also it is reported that the local court did not allow parents to meet their daughter.

According to ANI, Arti Bai’s father Dr Namo Mal said that his daughter went missing after she left home for the beauty parlour where she is working.

Cases of attacks on Hindu temples and kidnapping Hindu girls in Pakistan are routine.

Entire Pakistan has only 30 functional temples today, out of the 1,300 pre-Partition era temples.

In December 2020, a top US diplomat for religious freedom Samuel Brownback said that Pakistan is marketing Hindu and Christian women as “concubines” and “forced brides” to China.

In March 2021, a 31-year-old journalist belonging to the minority Hindu community of Pakistan was shot dead by some unidentified assailants for exposing the role of politicians and clerics in the forceful conversions of Hindu girls.