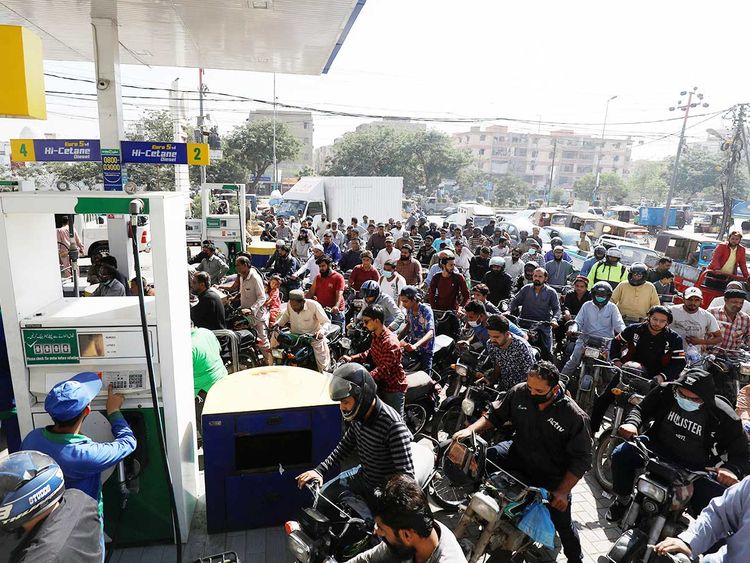 Petroleum Ministry officials and the Pakistan Petroleum Dealers Association (PPDA) held negotiations on Thursday after a crippling strike across the country.

The PPDA is demanding an increase in the profit margin and raise in petrol prices up to PKR 9 (Dh 0.19) per litre.

Minister for Energy Hammad Azhar while terming their demand unjustified stated a summary to increase their profit margin has already been been moved to Economic Coordination Committee (ECC) but “PKR 9 raise cannot be granted just to benefit a few companies.”

“Legitimate demands will be accepted, illegitimate ones will be not,” declared the minister.

The PPDA on the other hand alleged the government was backtracking on its promise to raise petroleum commission.

The association has vowed to continue the strike till its demands are met.

Although most of the privately-owned filling stations ceased operations across the country from Thursday morning in solidarity with the PPDA, some state-owned stations of Pakistan State Oil (PSO) and a few other companies including Shell and Hascol were still operational.

In Islamabad, Lahore, Karachi and Peshawar, some PSO stations were open, while a vast majority were closed.

On Wednesday night, people rushed to petrol pumps as they heard about the strike by the PPDA.

Long queues were seen in big cities despite the petroleum ministry spokesman’s statement that there was nothing to worry as the government had sufficient stock and most of its state-run filling stations were operational.

In Islamabad by midnight Wednesday, several filling stations had run out of fuel and diesel, which added to the panic.

Oil and Gas Regulatory Authority (OGRA) spokesperson Imran Ghaznavi in a tweet said the authority was in touch with Oil Marketing Companies (OMC) to ensure uninterrupted supply of petroleum products.

“OGRA teams are in touch with stakeholders and engaged in smooth supplies,” he further said.