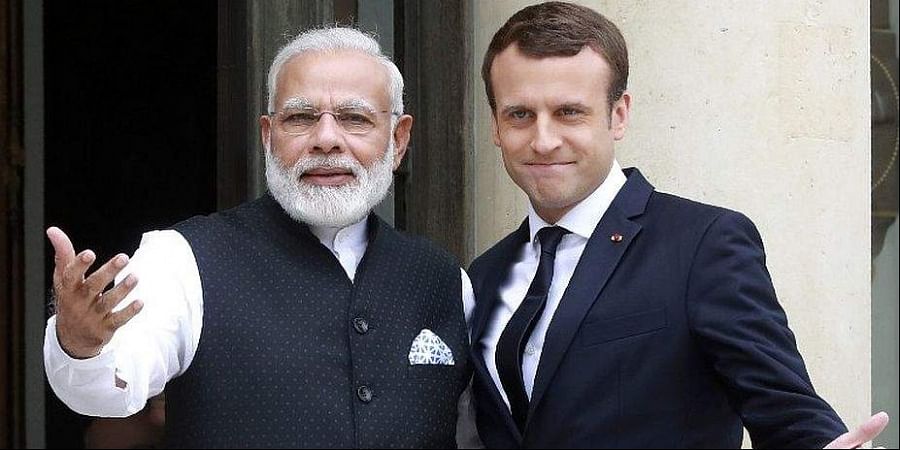 Prime Minister Narendra Modi’s dinner meeting with French President Emmanuel Macron during his stopover in Paris on Wednesday is expected to record positive movement in India-France strategic and defence ties, which have always been on the top of the agenda. Cooperation in defence is also the cornerstone of the India-France partnership. With this meeting the bilateral relations are expected to reach a new height with France actively collaborating in “Atmanirbhar Bharat” project in the defence sector. The two countries have a lot of ground to cover in the strategic areas in this meeting, bolstered by a strong relationship underscored by convergences in global and regional priorities.

PM Modi’s Paris visit is all about adding more strategic blocks to a deep relationship. With France, India is looking towards manufacturing and export of emerging and critical defence technologies without any license regime or any legal encumbrances. Under the ‘Make in India’ policy of PM Modi, India is looking towards France to make Safran aircraft engines and make air independent propulsion submarines to utilize the already existing manufacturing line at the Naval Dockyards in Mumbai. With France making India the lead partner in its Indo-Pacific policy, the two countries plan to share technologies for better maritime domain awareness in the Indo-Pacific particularly the Indian Ocean.

The areas of defence and security cooperation, space cooperation and civil nuclear cooperation constitute the principal pillars of the strategic partnership of both countries. India and France also have a robust economic partnership. Apart from these, India and France are increasingly engaged in new areas of cooperation such as maritime security in the Indo Pacific region, counter terrorism, climate change, renewable energy and sustainable growth and development among others. Both share a close degree of convergence on a range of regional and global issues also.

France has continued to support India’s claim for permanent membership of the United Nations Security Council and the reforms of the United Nations. France’s support was vital in India’s accession to the Missile Technology Control Regime (MTCR), Wassenaar Arrangement (WA) and Australia Group (AG). France continues to support India’s bid for accession to the Nuclear Suppliers Group (NSG). India and France have consistently condemned terrorism and have resolved to work together for adoption of the Comprehensive Convention on International Terrorism (CCIT) in the UN.

Over a 1000 French businesses in India

The two countries have a burgeoning economic relationship with French businesses and industry contributing significantly to India’s Atmanirbhar Bharat campaign. There are over a 1000 French businesses in India in variegated sectors like defense, IT corridors, ITES, consulting, engineering services, heavy industry, smart-cities, railways, capital and trade exchanges, skill development etc. France is the 11th largest foreign investor in India with a cumulative FDI stock of USD 9.83 billion from April 2000 to March 2021, which represents 2 % of the total FDI inflows into India. There are more than 150 Indian companies operating in France including sub-subsidiaries, employing more than 7 7,000 persons.

France’s GDP is almost similar to that of India’s, but bilateral trade remains far below potential, even though India has enjoyed a consistent trade surplus. In the period April 2020-March 2021, India-France bilateral trade stood at USD 7.86 billion. India’s exports to France were valued at USD 5.6 billion, down by 22.9%. Meanwhile, French exports to India decreased by 20.95% during the same period to USD 5.1 billion. Trade with France constitutes only 1.41% of India’s total international trade.

Almost all the major French companies are present in India including Renault, Saint Gobain, Veolia, Michelin, Capgemini, Sanofi, EDF, Airbus, Lactalis, Sodexho, Total and others. India’s Reliance, Tata, Mahindra, L&T and other big companies have tied up joint cooperation with major French companies like Dassault, SAFRAN, Thales, Scneider Electric and others in the defence and electronics sector. French infrastructure companies are looking forward to major opportunities in Indian projects including in smart cities and renewable energy.

France has been actively cooperating with various Indian programmes, especially three Smart Cities, viz. Chandigarh, Nagpur and Puducherry. SNCF- the French railways and the 8 Indian Railways have established a Permanent Indo-French Railway Forum. They have been cooperating in the studies for the feasibility of semi-high speed upgrade of Delhi-Chandigarh section and station development study of Ambala and Ludhiana.

There also exist vibrant bilateral cultural and educational linkages as also growing people-to-people contacts. Indian diaspora also has a sizeable presence in metropolitan France and its overseas departments/territories. The Indian diaspora in France is estimated to be around 5,00,000 with majority being French citizens based in the French overseas territories. Around 109,000 Indian citizens reside in mainland France, with a majority originating from former French colonies of Puducherry, Karaikal, Yanam, Mahe and Chandernagore. A sizeable number of Indian origin population lives in the French Overseas Territories of the Reunion Island (300,000), Guadeloupe (60,000) and Maritinique (6,000). There has also been an increasing number of students (nearly 10,000) and professionals studying and working in mainland France. There are more than 50 Indian community organizations active in France. Major communities constituting the Indian origin population originate from Puducherry , Tamil Nadu, Gujarat and Punjab.