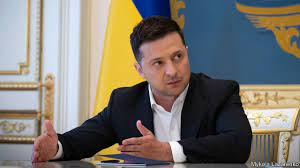 Ukrainian President Volodymyr Zelensky and the G7 ambassadors to Ukraine gathered at the Chornomorsk port near Odesa today in a show of unity following an agreement to allow the resumption of grain exports from Ukrainian Black Sea ports.

Although a deal was brokered last week between Ukraine and Russia to allow the urgent grain to be exported, no ship has left so far, despite hopes to resume shipments as early as this week.

Zelensky on his Telegram account shared pictures of the event saying it is important for us to remain the guarantor of world food security. As someone blocks the Black Sea and takes life in other countries, we allow people to survive.

Martin Griffiths, UN Under-Secretary-General for Humanitarian Affairs and Emergency Relief Coordinator, said Thursday that procedures for safe passage were still being worked out.