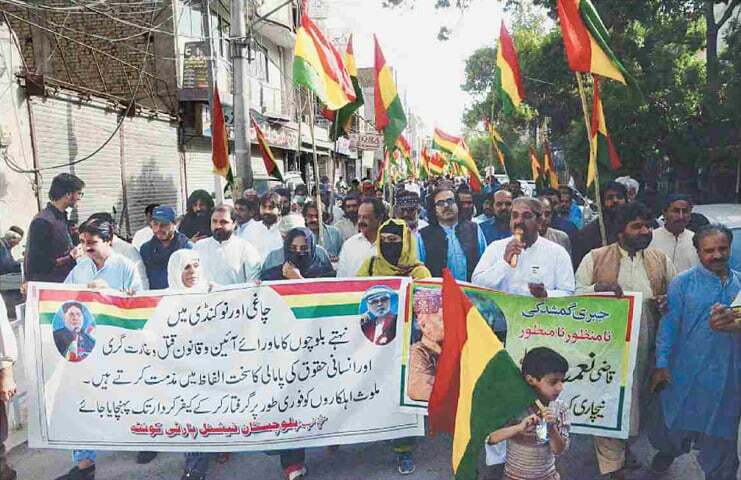 Demonstrations were organised by various political parties in Dalbandin, Nokkundi, Nushki and Kharan towns on Wednesday in protest against the recent killing of a truck driver in Chagai as well as injuries to those who had taken to the streets against the incident.

Workers of the Balochistan National Party-Mengal (BNP-Mengal), National Party (NP) and Baloch Students Organisation-Pajjar (BSO-Pajjar) staged a joint demonstration outside the Dalbandin Press Club where the participants chanted slogans, demanding justice for the driver killed near the Pak-Afghan border and the protesters injured in Nokkundi and Chagai towns.

Sardar Rafiq Sher of NP and others urged the authorities concerned to open the borders with Iran and Afghanistan for trade as they said there was no other major source of income for the people of Chagai district.

The NP held similar protests in Nokkundi and Nushki.

In Kharan and Nushki, BNP-Mengal workers staged similar rallies demanding justice for the victims of Nokkundi and Chagai incidents.

BNP-M Nushki district president Haji Bahadur Khan Mengal and Nadeem Siapad of Kharan called upon the authorities to lodge an FIR against those personnel who had opened indiscriminate fire on protesters in Nokkundi and Chagai towns.