Quad: The China factor at the heart of the summit 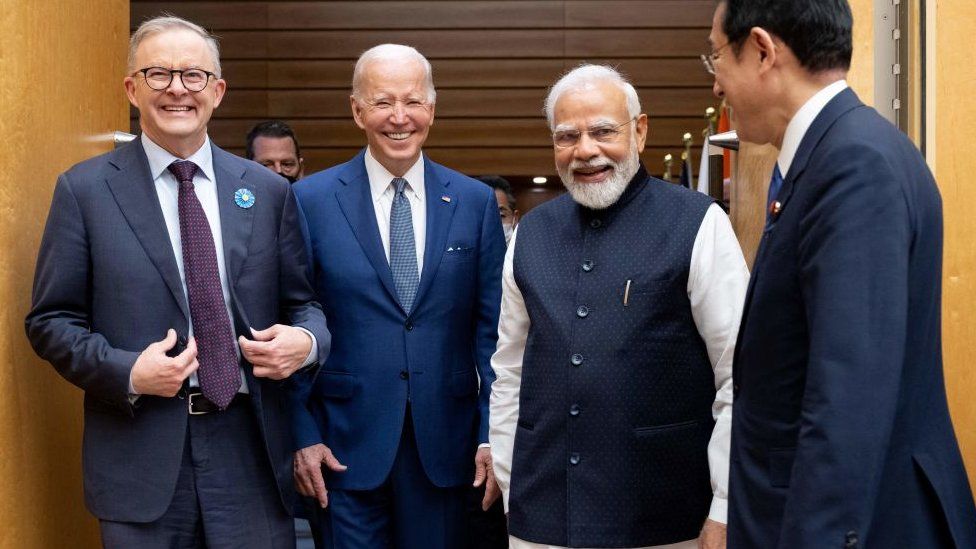 Leaders of the Quad nations are meeting in Tokyo on Tuesday in what can be described as one of the most important meetings in recent years that will affect the geopolitics and security of the Indo-Pacific region.

The group – composed of Japan, the US, Australia and India – seems to be emerging from the shadows of the Covid-19 pandemic and, to some degree, from Russia’s invasion of Ukraine as well.

The top leaders are gathering for the fourth time – they have already met once in Washington last September and twice virtually – in less than two years. That underscores the importance of the Quad, which was largely just a concept until 2017.

That year, then-US President Donald Trump revived the group in a bid to take on China in its own backyard.

But analysts say the steady decline in each Quad nation’s bilateral ties with China in the past few years appears to have given it new impetus.

Michael Kugelman, deputy director at the Wilson Center think-tank, says the latest meeting is likely to sharply focus on the Indo-Pacific.

The US has acknowledged that India’s heavy dependence on Russia for its defence imports could not be overlooked.

So the Quad will focus on mutual points of convergence – and China is the biggest of these.

China has become increasingly assertive in the region, with ongoing maritime disputes with several countries and a land boundary conflict with India.

Beijing is investing heavily in strengthening its navy and its recent security pact with the Solomon Islands has stoked fears in Australia. A leaked draft of the agreement – which was verified by the Australian government – said Chinese warships would be permitted to dock on the islands and that Beijing could send security forces “to assist in maintaining social order”.

It will be interesting to see how Anthony Albanese, Australia’s newly elected PM, deals with this threat and how he raises the issue within the Quad framework.

Japan, for its part, has become increasingly wary of what it calls routine “incursions” from the Chinese navy.

As for the US, it is evident that it wants to protect its interests in the region.

The launch of the US-led Indo-Pacific Economic Framework (IPEF), which has 13 regional players, is a step in that direction. It aims to promote regional growth, sustainability and inclusivity in the region.

It comes on the back of US President Joe Biden’s recent meeting with the Association of South East Asian Nations (Asean) leaders in Washington.

The region’s importance can be understood from the fact that it has some of the world’s most heavily used shipping lanes, including the Strait of Malacca. Around 30-40% of the world’s trade, including goods and crude oil, passes through these lanes.

So when Indian PM Narendra Modi, Mr Biden, Mr Albanese and Japanese PM Fumio Kishida meet in Tokyo, they may not mention China directly – but regional security will be on top of their agenda.

The Quad has several working groups, including on cybersecurity, health, infrastructure and education, but it has not explicitly spoken about any defence co-operation.

However, it’s likely to announce a joint strategy to tackle illegal fishing in the Indo-Pacific region – which analysts say is largely aimed at China.

Mr Kugelman says this announcement would be quite significant because it involves the use of satellite imagery and active intelligence sharing – which will have security implications.

But he adds that the group will need to do a lot more before Asean nations see it as a major counterbalance to China.

It’s not that there is no defence angle to the Quad. The four countries, and a few others, have taken part in India’s Malabar naval exercises, and issues such as Afghanistan and North Korea’s nuclear programme have been discussed at the Quad. Mr Biden recently warned China that the US would intervene militarily to protect the island if it is attacked.

But Mr Kugelman points out that both Asean and Quad nations have significant trading volumes with China and they will try to avoid any direct confrontation with Beijing – at least until the Quad can emerge as a net security provider in the region.

Moreover, Delhi is a partner with Beijing in several multilateral forums, including Brics – which also includes Russia, South Africa and Brazil.

“The Quad has come a long way but it still has an informal structure and has no secretariat. So, it needs to keep evolving,” Mr Kugelman says.

Meanwhile, Russia’s growing ties with China will most likely feature as well as they don’t suit Delhi’s geopolitical calculations.

Some analysts have predicted that the Ukraine war may “send Russia into China’s arms” and Beijing might be able to persuade Moscow to increase its presence in the Indo-Pacific.

If that happens, it will upset Delhi’s interests the most as it has close ties with Russia and an ongoing dispute with China.

It’s just a scenario at the moment, Mr Kugelman says, but one that can’t be completely overruled, especially since Russia has been quite critical of the Quad.

Beijing’s initial reaction to the Quad was to dismiss it, saying the group would “dissipate like sea foam”. But it later sharpened its criticism of the group, calling it the “Asian Nato”.

With such hardening of positions from both sides, Asean nations – some of whom have active maritime disputes with China – may find themselves between what one analyst called “a rock and a hard place”.