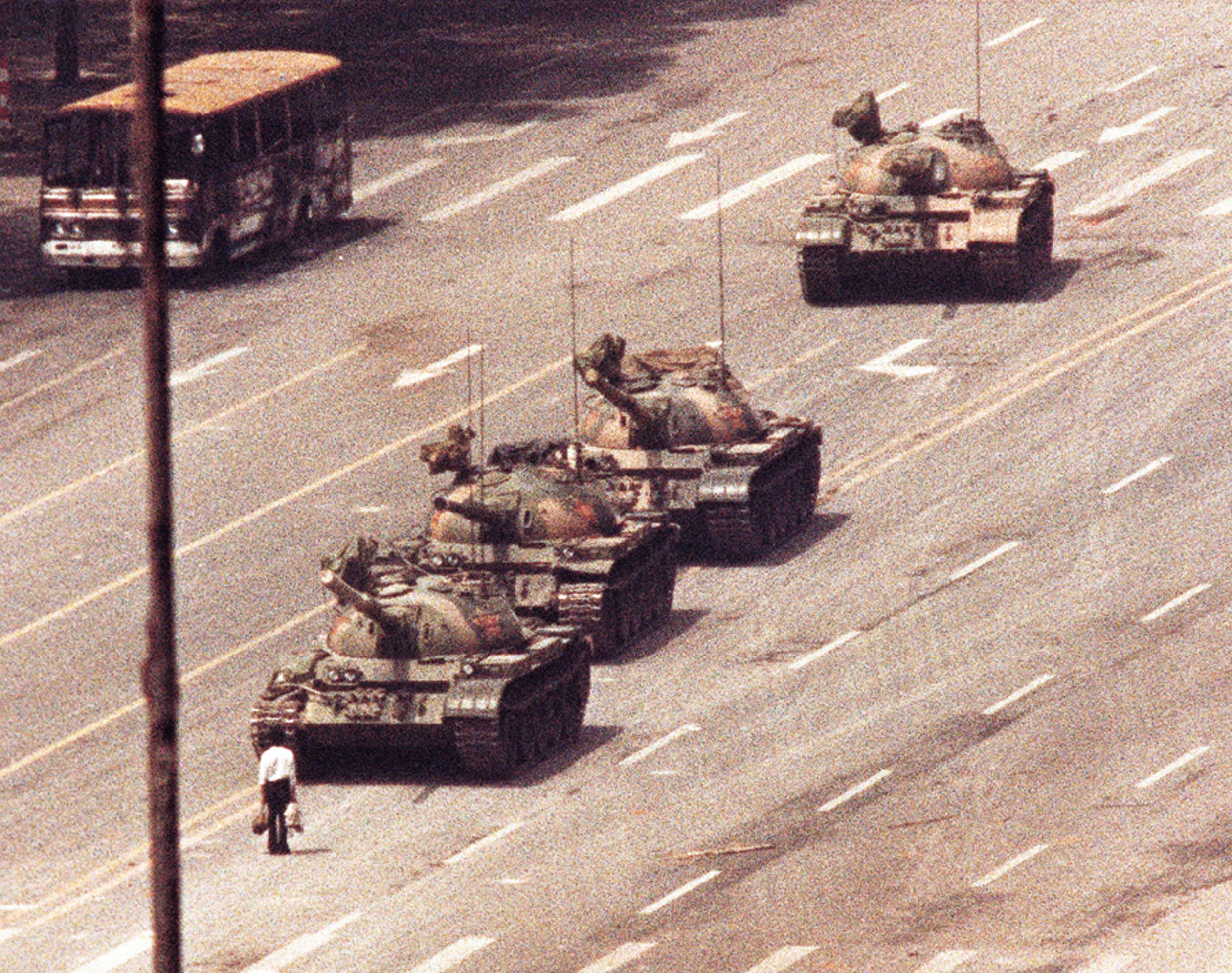 Who was the tank man?

The tank man was an unidentified Chinese man who stood in front of tanks leaving Tiananmen Square in Beijing on June 5, 1989, the day after the Chinese government’s violent crackdown on the Tiananmen protests. He repeatedly shifted his position in order to obstruct the tank’s path. The incident was filmed and shared with a worldwide audience. Internationally, it is considered one of the most iconic images of all time.

The event remains a taboo topic of discussion in mainland China and will not be officially commemorated by the ruling Communist Party or government.
The government has never released a death toll of the June 4, 1989 crackdown, but estimates from human rights groups and witnesses range from several hundred to several thousand.

Who protested in Tiananmen Square, and why?

China slid into economic chaos in 1988 with panic buying triggered by rising inflation peaking at more than 30 per cent in cities. Public discontent, coupled with the death of purged reform-minded Communist Party leader Hu Yaobang on April 15, 1989, set the stage for the demonstrations.
More than one million people flooded into central Beijing, keen to vent their anger against corruption, economic mismanagement, nepotism and poor career prospects for students. Gathering in Tiananmen Square, the students erected their own ‘Goddess of Democracy’ statue opposite the official portrait of the Communist revolutionary leader Chairman Mao Zedong.

Chinese Minister said the bloody crackdown was a ‘correct’ decision

Chinese leaders denounced the demonstrations as a counter-revolutionary movement and the ensuing flurry of arrests, executions and exiles frightened many demonstrators into silence.
In 2009, reformist Chinese leader Zhao Ziyang broke the official silence on the 1989 Tiananmen crackdown, denouncing the killings of protesters as a “tragedy” in recorded memoirs released four years after his death.
On the 30th anniversary in 2019, China Defence Minister Wei Fenghe, in a rare acknowledgement of the bloody crackdown, said it was the “correct” decision which led to a stable country since then.

Restrictions in Hong Kong on June 4

Hong Kong police said on Friday that they will close large parts of Victoria Park, once the site of packed annual candlelight vigils to commemorate China’s Tiananmen crackdown, on the eve of the event’s 33rd anniversary.
The announcement came a day after authorities warned people that going to the park on June 4 — even alone — could put them at risk of breaking the law.

Public commemorations in Hong Kong in past

In the past, huge crowds would routinely gather in the large public space to pay tribute to victims of the Chinese government’s 1989 clampdown, when soldiers brutally quashed peaceful demonstrations demanding political and economic reform.
Public commemorations are all but forbidden on the mainland and, until recently, semi-autonomous Hong Kong was the one place in China where large-scale remembrance was still tolerated.

That has changed since Beijing imposed a wide-reaching national security law two years ago, in reaction to citywide pro-democracy protests.
The group that had organised the annual vigil in Hong Kong’s Victoria Park for more than three decades decided to disband in 2021 in response to increased scrutiny by authorities. Many of its leaders and several prominent Hong Kong activists, including Joshua Wong, Chow Hang-tun and Lee Cheuk-yan are currently serving prison sentences for various crimes.