Road to J&K’s Prosperity has to pass through its Villages: LG Sinha 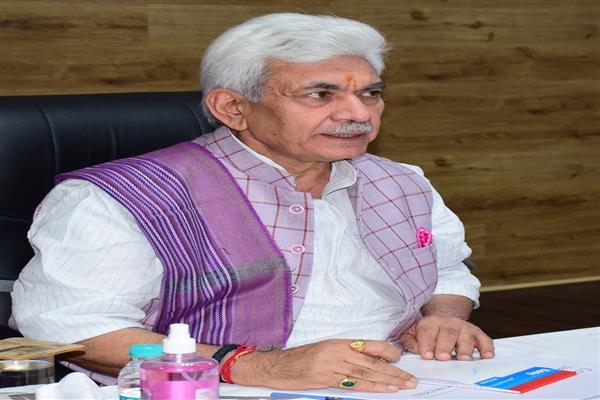 Lieutenant Governor Manoj Sinha emphasized that the policies and development plans for districts and concerned departments must accord higher priority to rural development as road to prosperity of Union Territory of Jammu Kashmir has to pass through its villages.          Highlighting the role of rural infrastructure, self-employment, and agrarian society, the Lt Governor observed that the concerned department’s policies should be based on pragmatism in order to harness the tremendous potential of our villages.         “Around 70% of J&K’s population is dependent on agriculture and allied activities. Today, the development in rural areas is not just about self-sufficiency in food production but also about increasing yields and income and making the people more empowered. It is also about making the villages self-sufficient because the road to J&K’s prosperity has to pass through its villages,” Lt Governor said.           The Lt Governor directed the concerned officers to adopt rural development policies which are based on pragmatism and strengthen the planning and implementation at Panchayat level.          “Each and every policy must improve the lives of people living in villages. Today, more than 56,000 self-help groups are acting as facilitators of development. Our aim should be to enhance the capacity and scale of these groups with financial support, market linkage, special knowledge and skills that can be used to change the face of rural J&K,” Lt Governor observed.           The Lt Governor highlighted the mega projects related to rural development, which have been completed in the previous financial year. These projects are in agriculture, animal sheep husbandry, horticulture, skill development, cooperatives, road, Power development, and Jal Shakti sector.            While highlighting the achievements, the Lt Governor asked the officers to continuously focus on strengthening economic relationship between farm & market to benefit the farmers and rural population. He further said that making benefits of innovation, technologies available to rural population and agrarian society should be highest priority.           The Lt Governor observed that the steps taken by the government will integrate our rural areas into modern economic units and increased business opportunities in agro and rural industry can transform the rural economy.           “There is a scope for rural reforms at various levels. Products of rural areas must be commercialized for sustaining growth. Adequate attention should be paid to public-private partnership to increase the income of rural population and both farm and non-farm economy should be incentivized to create well-equipped and self-sufficient villages. Concerned officers and institutions must ensure access to affordable credit and huge investment being made in rural areas must translate into enhanced productivity,” the Lt Governor further added.