Russia and China forge closer ties as U.S. is preoccupied with struggles at home 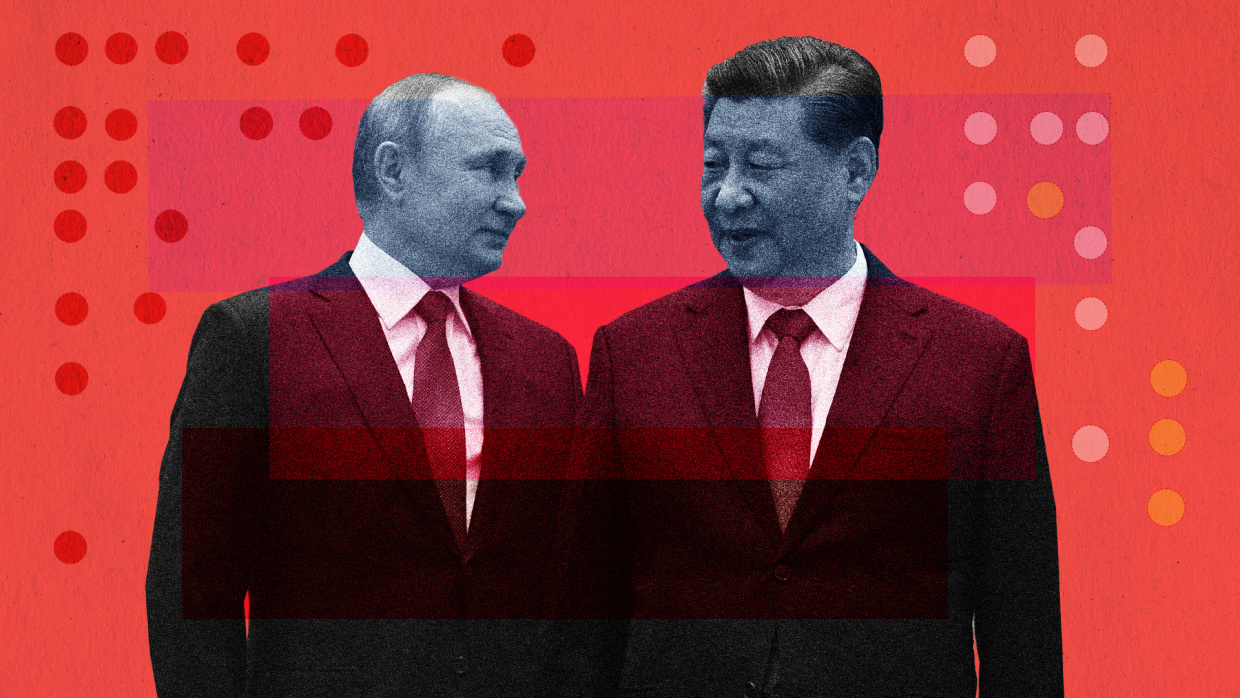 One defied diplomatic boycotts over its human rights record and welcomed the world to its first Winter Olympics. The other massed troops on its neighbor’s border and issued demands to the United States and its allies.

Chinese President Xi Jinping and Russian President Vladimir Putin stood side by side during the opening ceremony of the Beijing Winter Olympics this month. Their joint appearance delivered not only the most forthright display of Sino-Russian unity in decades, but also what observers saw as the clearest signal yet that the two are intent on shaping a new world order — one in which America’s postwar global dominance is in retreat and autocratic regimes can thrive in the space left behind.

“They see this as a post-Trump world where the Americans pulled out of Afghanistan in disarray, they don’t seem to be able to deter the Russians and they can’t even manage Covid,” said Steve Tsang, director of the China Institute at SOAS University of London. “So it may not be totally stupid and wrong if they say that ‘the East is rising and the West is declining.’”

With democracy backsliding globally, the resolve of Russia and China has been particularly strengthened by the perceived U.S. retreat from the global stage and the erosion of its own values at home, he said. This has created a void, in the eyes of some in Beijing and Moscow, into which the two countries are only too happy to step.

That idea is not entirely new.

Since at least 2008, government officials and intellectual elites in China and Russia have been predicting or advocating the end of America’s postwar dominance. But a 5,000-word joint statement on Feb. 4 was the first time these countries have together spelled out their vision so comprehensively for this “multipolar” future.

“A trend has emerged towards redistribution of power in the world,” the statement said. This “new era” will “ensure peace, stability and sustainable development,” it added, rather than the “power politics” and “bullying” of U.S. supremacy where “the weak fall prey to the strong.”

Download the NBC News app for breaking news and politics

Crucially, the end of American dominance would stop the West from trying to “interfere in the internal affairs of other states, infringing their legitimate rights and interests,” the statement said, repeating a long-standing complaint used to push back against Western calls for democratic, legal and economic reforms.

For China, this would mean less criticism over alleged human rights abuses against its Uyghur Muslim minority, which the U.S. and others say is being subjected to cultural genocide, its crackdown on freedoms in the Chinese territory of Hong Kong, and its threats to invade the self-governing island of Taiwan, all of which China denies.

Russia wants to hush criticism of its meddling in other countries’ elections, its invasion of neighbors, such as Georgia and Ukraine, and its silencing of political opposition and freedom of speech at home, all of which it also denies.

The extent of American decline has been debated for years within Chinese circles of power, said Kingsley Edney, who teaches politics and Chinese international relations at the University of Leeds in England. Articulating it so strongly in the statement is “maybe a sign and this is something that’s becoming more of a consensus view within the establishment,” he said.

Indeed, the rise of the East and decline of the West has become a common refrain for Xi and his top officials — and not without evidence. China is projected to become the world’s largest economy this decade and is building the equivalent of the French navy every four years, German and French officials have said.

The same cannot be said for Russia, which, though punching above its weight thanks to its large gas reserves and nuclear arsenal, is still a midsize economic power whose gross domestic product is smaller than that of Italy. But in China, it now has a powerful partner supporting several of its demands, including effectively barring Ukraine from ever joining NATO.

Some academics believe the world has already moved on from being “unipolar” in which Washington’s dominance was built on what it likes to call the “the rules-based order.” That system of values is predicated, in theory at least, on democracy, human rights and international free trade.

In reality, America has often contradicted these ideals, from its own history of slavery and segregation to funding right-wing regime change in Latin America. But it’s only relatively recently that foreign powers have seriously questioned its economic, cultural and military supremacy.

When the Soviet Union fell in 1991, some thinkers believed that the Western liberal model had prevailed for good: Democracy had won a global victory and it was only a matter of time before the authoritarians of the world fell in line.

“It gave the United States the ability and the possibility to do whatever it saw fit on the world stage,” Fyodor Lukyanov, a Russian foreign policy analyst who heads a body that advises the Kremlin, wrote last year. “There were no external restraints left.”

Fast forward 30 years — through financial crises, several heavily criticized U.S.-led invasions and  administrations that departed from many foreign policy norms — and Washington’s place in the world looks quite different.

In 16 countries surveyed by the Pew Research Center in spring 2021, on average just 17 percent of people said the U.S. was a good model for democracy, and 57 percent said it used to be.

International faith in the Western model took a hit following the U.S.-led invasion of Iraq in 2003 and the financial crisis of 2008. But Donald Trump’s election dismayed long-standing allies and shocked enemies in a way few previous events had done, particularly his criticism of the very institutions on which postwar American power had been built, and his promotion of the conspiracy theory that he won the 2020 presidential election, which he lost.

President Joe Biden was seen by many as a relief. But America’s continued struggles to contain the Covid-19 pandemic, its chaotic withdrawal from Afghanistan and the false belief of many Republicans in Trump’s baseless claim that he won has only deepened these theories of declinism abroad.

It’s unclear what the Sino-Russian partnership means for this standoff on the fringes of Europe. China backed Russia’s demand that Ukraine should never join NATO, but experts believe it would not want a war because of its trading links to Kyiv.

With tensions at an all-time high and Russia holding military drills in the nearby Black Sea, Russian Foreign Minister Sergey Lavrov met with Putin on Monday and suggested that the Kremlin should continue its diplomatic route with the U.S. and its allies. The Kremlin also said Putin has approved his latest response in the back-and-forth with the U.S. over Moscow’s sweeping security demands, which would reshape the post-Cold War landscape in Europe.

Kremlin spokesperson Dmitry Peskov said Monday relations between Moscow and Washington were “on the floor” despite a call between Biden and Putin on Saturday.

Russia shifting so many military resources to its European flank is a sign of how comfortable it feels leaving its east side relatively undefended, according to Michael Kofman, the research program director in the Russia Studies Program at CNA, a Washington-area think tank.