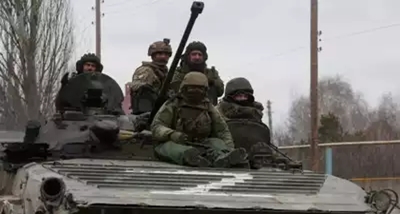 Russian forces have struck port infrastructure in Ukraine’s southern Mykolaiv region, local officials told. Mykolaiv’s Mayor Oleksandr Senkevich said today that a massive missile strike was launched on the south of Ukraine from the direction of the Black Sea and with the use of aviation.

Last Saturday, Russia struck another southern Ukrainian port of Odesa, casting doubt on a plan to restart Ukrainian grain exports. However, Russia has blamed Ukraine for stalling shipments by mining the port waters.

Meanwhile, Ukraine has accused Moscow of waging a gas war against Europe and cutting supplies.

Russian energy firm Gazprom announced it is once again reducing gas flows into Germany to allow work on a turbine on the Nord Stream-1 pipeline. Ukraine’s President Volodymyr Zelensky said, this was simply gas blackmail against Europe. The Nord Stream-1 pipeline, which pumps gas from Russia to Germany, has been running well below capacity for weeks.

Earlier this month, Russia’s biggest European pipeline was completely shut down for a 10-day maintenance break, sparking fears in Europe that shipments would not resume at all.