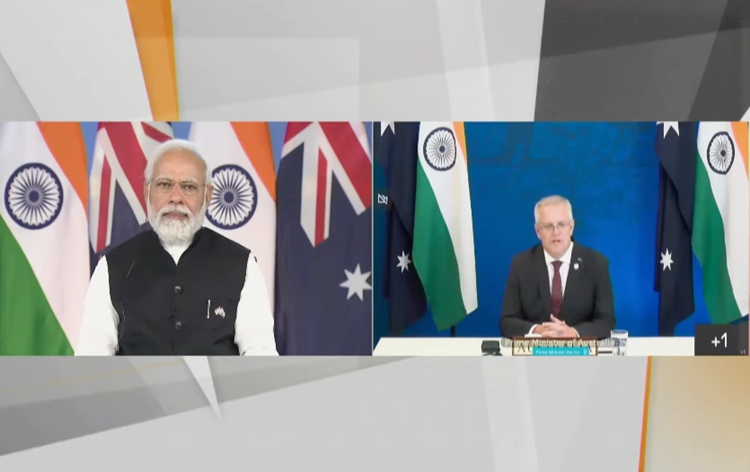 The second India-Australia Virtual Summit is underway. During this Summit, Prime Minister Narendra Modi and his Australian counterpart Scott Morrison will take stock of progress made on various initiatives under the Comprehensive Strategic Partnership.

The Summit will lay the way forward on new initiatives and enhanced cooperation in a diverse range of sectors between India and Australia. The leaders are also expected to discuss views on regional and international issues. This Summit highlights the importance that both countries attach to their bilateral relations as well as their close cooperation in regional and international issues.

In his opening remarks at the summit, Prime Minister Narendra Modi has said that in the last few years the relationship between India and Australia have made remarkable progress. He said, both nations have very close cooperation in several areas including trade and investment, Defense and security, education and innovation, science and technology. Mr Modi said, the bilateral collaboration has also grown rapidly in many other areas, such as critical minerals, water management, renewable energy, and Covid-19 research. He welcomed the announcement of the establishment of Center of Excellence for Critical and Emerging Technology Policy in Bangalore.

Mr Modi said, the conclusion of the Comprehensive Economic Cooperation Agreement, CECA will be important for our economic ties, economic revival, and economic security. He said, on this agreement, significant progress has been made in a very short time. Mr Modi said, both the nation have also good cooperation in QUAD. He said, our collaboration reflects a commitment to free, open, and inclusive Indo-Pacific.

Prime Minister Modi also thanked his Australian counterpart, Scott Morrison, for taking the initiative to return ancient Indian antiquities. He said, many of the antiquities are over hundreds of years old and were taken out of the country illegally from the states like Rajasthan, West Bengal, Gujarat, Himachal Pradesh.