Shias Shiver with rise of Saad Rizvi of TLP. 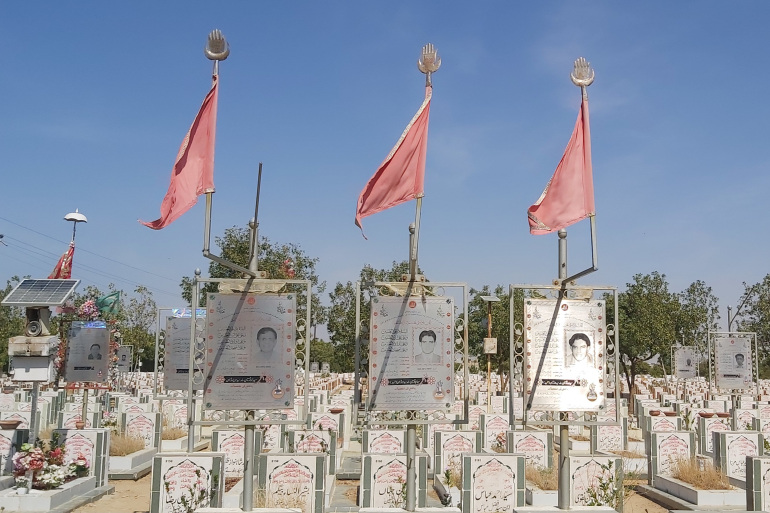 Since 2001, more than 2,600 Shia Muslims have been killed in violent attacks. Pakistan is home to 200 million Muslims. It is also home to one of the largest Shia populations in the world, as an estimated 20 percent of Muslims there are Shia.

In August 2020, in the month of Muharram, a fresh wave of sectarian tension rippled across Karachi. Shia scholars were accused of blasphemy after they gave sermons critical of Islam’s early caliphs. Thousands rallied in Karachi under the banner of the Tehreek-e-Labbaik Pakistan(TLP), calling Pakistan’s Shia leaders infidels.

Now TLP calls for expulsion of French Consulate, and why not, when their own PM Imran Khan says so, shouldn’t they go two notch up. Arrest of its leader Maulana Saad Rizvi, in anticipation of his renewed call for anti France ruckus, is pretty small event, even by Pakistani standards. However the scale of violence and mayhem that ensued after the arrest, sent shivers down the spine of the primary oppressed sect of Pakistan.

Yes, for Shias. With the rise of TLP, there is a cause of concern for them, Big Concerns.

TLP is on the rise, and is it is unabashedly anti-Shia, against all ‘foreign influences’ and came together under the leadership of a man who thrived on implementation of the harsh provisions of the Pakistan Penal Code against blasphemy. Those provisions have led to frequent attacks against minorities and Shias across the country on the smallest of reasons.

For records, Pakistan Army had cultivated this group, to eat into votes of PML-N in Punjab as well as hurt PPP in two seats in Sindh, to help get majority for Imran Khan, Since then, they have been left to their deeds, killings, protest and have the Pakistani religious as well as Radical landscape, to themselves.

How it has come to this, Shias being 20% minority in Pakistan are not less in numbers, and have not been found to be violent in any country in the world, Still painted as villians enough to be killed?

‘Down with Shia’ Era Dawns with Zia-Ul Haq

In quest for consolidating hold over Pakistan through Sectarian Radicalization

Pakistan’s Shia community, the second largest in the world after that of Iran, had an equally influential role in Pakistani history and its politics in the Indian sub-continent. Before the arrival of General Muhammad Zia-ul-Haq in 1977 coup, by hanging an elected representative of people of Pakistan, the relationship between Pakistan’s Shia and Sunni communities was mostly amicable.

But in a bid to undermine democracy, and justify Pakistan Army’s rule against “India is out to get us”,  General Zia-ul-Haq’s controversial ‘Islamization’ policies, and a sense of Shia empowerment in the aftermath of the Islamic Revolution in Iran in 1979 had the combined effect of curtailing and criminalizing the Shia freedom to practice their religion and discarding their loyalty to Pakistan and existence as humans in their own country. Those developments also contributed to the persecution of many Shia at the hands of a number of militant anti-Shia organizations. A minority of Shia groups turned to violence in order to defend the community, engaging in tit-for-tat terror attacks against militant Sunni groups.

Zia allowed militant sunni organizations, as they served to support him blindly, and propagate anti-India propaganda and religious fanaticism directed majorly towards ‘India Scare’. What they wanted in return? Persecution of Ahmadis, Shias and others; Zia was ready to turn a blind eye.

The largest cluster of such militant groups was Deobandi in orientation.  Deobandi groups included the Afghan Taliban, anti-Shia groups such as Lashkar-e-Jhangvi (LeJ)/Sipah-e-Sahaba-e-Pakistan (SSP) (which now go by the name of Ahle Sunnat Wal Jamaat (ASWJ)), and several that were ostensibly turned to fight Indians (e.g. Jaish-e-Mohammad).  These Deobandi groups share a vast infrastructure of madrassahs and mosques and have overlapping membership with each other and with the Deobandi Islamist political groups, most notably the factions of the Jamiat-e-Ulema-Islam (JUI).

Zia lent heavily on Islam and Radical ulema due to lack of popular support. Some of his concessions to ulema still haunt Pakistan’s existence as a sane society. The penal code was amended to add the death penalty as a punishment for blasphemy and increase the scope of what constitutes blasphemy. In 1979, he promulgated the Hudood Ordinances with punishments such as lashes for adultery.

In 1980, he set up the Federal Shariat Court to hear appeals in cases under the Hudood Ordinances. In 1981, he set up a hand-picked consultative body, Majlis-e-Shoora, to act as the federal parliament. It was packed with ulema nominated by him.

Post Zia, throughout the 1990s, sectarian attacks continued.  However, by the 1990s, the Pakistani state had crushed the anti-Sunni militias, leaving the ‘anti-Shia’ Sunni militants intact.  During the mid-1990s, groups such as LeJ/SSP also fought alongside the Taliban in Afghanistan, illustrating their utility to the state.

Another gift of Zia’s era was the radicalisation of Islamabad’s Lal Masjid. Its prayer leader, Muhammad Abdullah, was close to the Zia before he became close to the Afghan Taliban’s chief Mullah Omar and senior al-Qaeda leaders. It took another military dictator Musharraf, two decades later, to align the extremist theme to Pakistan Army’s melody, at Lal Masjid in a bloody operation in 2007.

As Pakistan was rehabilitating the Taliban in Pakistan, in a hope to use them for their benefit sometime soon, Tehreek e Takiban Pakistan(TTP) was one of them. Till US operations cool down, they needed to be entertained, what better than keep them busy in sectarian rifts.

Hakimullah Mehsood assumed command of the TTP, Pakistan’s sectarian killings became more frequent.  Hakimullah had a long history of association with the ASWJ.  Under him, the TTP began targeting any sect of Islam that these Deobandi militants considered to be “munafaqeen” (those who spread discord).  Not only were Pakistan’s Shia under attack (in addition to Ahmedi and Pakistan’s religious minorities), so were Pakistan’s massive Sufi population, frequently referred to as Barelvis.  The TTP began openly was attacking Sufi shrines and Pakistan Army was looking the other side.

Pakistan Army was now helping Taliban attack US forces in Afghanistan, while orchestrating protests by their Radical Sunni protests against Americans.

Craftily, Pakistan Army ensured Taliban efforts to interdict NATO supplies as they cross through Pakistan to Afghanistan result in a March 2008 attack that left 25 fuel trucks destroyed and a November 2008 raid when at least a dozen trucks carrying Humvees and other supplies were hijacked at the Khyber Pass.

Thi was followed by an orchestrated nation wide protests against the Americans, resulting in concessions, more dollars in pockets of Pakistani Generals and ofcourse American efforts in Afghanistan, duly ambushed for next 5 years.

By 2014-15, Pakistan Army had integrated ISKP, AlQaeda and Pakistani Taliban-TTP, and for next four years, they shall wreak havoc on Afghanistan Army and Americans, while Pakistan Army could get the Chinese design of CPEC miraculously untouched. Such has been the successful coordination of such Radical Terror groups.

Such groups are encouraged to be kept busy by indoctrinated hatred towards minorities, namely Shias, Ahmadiyyas, and to wipe out regional identities of Baloch, Pashtuns, Kashmiris and Sindhi cultures.

Pakistan’s civilian leaders have yet to come to any consensus on a political strategy to contend with these militants  and radicals prospering under umbrella of radicalized ecosystem of Pakistan Army. This has claimed tens of thousands of Pakistani lives since 2001.  The civilian political entities for their part, are reluctant to take them on for several reasons. First, parts of the military see Radical militants as important tools of its hold and to mess with foreign policy in India and Afghanistan.

Now for the military, the loyal Islamist and Radical militants will become even more important as the United States withdraws from Afghanistan and as Pakistan needs militants that are loyal to the Pakistani projection in its Pashtun political space and to hopefully re-establish foothold in Kashmir valley.

Second, because these Deobandi militant groups share overlapping membership with each other and with the JUI, the JUI provide their militant allies with political cover. This is important, since Pakistan Army has successfully eliminated PPP and PML-N from the fray, and if they need to establish another puppet, to quell public backlash against the woeful Imran Khan, they can pick another Mullah-leader, to keep public entertained.

Third, the military is unwilling to eliminate them in entirety because it believes that some of them can be rehabilitated and persuaded to aim their guns, suicide vests, and vehicle-born IEDS away from the Pakistani state and towards Afghanistan and India. (Yes. The same way $27 billion from Washington for being a “partner in the Global War on Terrorism”, are disturbed in encouraging its terrorists to kill Americans and their allies in Afghanistan.)

With the U.S. ouster of Saddam Hussein and the removal of the Taliban from Afghanistan, Iran’s position in the region has improved since 2001.

Pakistan Army fears a rising Iran in Afghanistan.  For Pakistan’s part, Iran has partnered with India for its work in Afghanistan.  For Pakistan’s Radical groups part, a rising Shia Iran threatens to undermine the status that Radicals have arrogated to itself: leader of the Radical movement in general and protector of Sunni hegemony in particular.

Some Pakistani Generals have often suspected that Iran can manipulate Pakistan’s Shia to achieve Tehran’s varied national and ideological interests, many of which are at odds with those of Pakistan.

Getting Maulana Saad Rizvi: an asset of ISI of Pakistan Army, to create an anti Shia sectarian hate wave is easy. They get easy hysterical support from public, in name of supposed insult to the Prophet, be it against France now or Netherlands in 2018.

Such elements are strengthened in long term,  to create sustained pressure on Shia Iran, to serve it to Chinese interests, to create a wedge in India-Iran-Russia strategic alliance, giving alternate reach to Central Asia, away from Pakistan-China axis.