SindhuDesh An Idea no More: An Imminent Reality 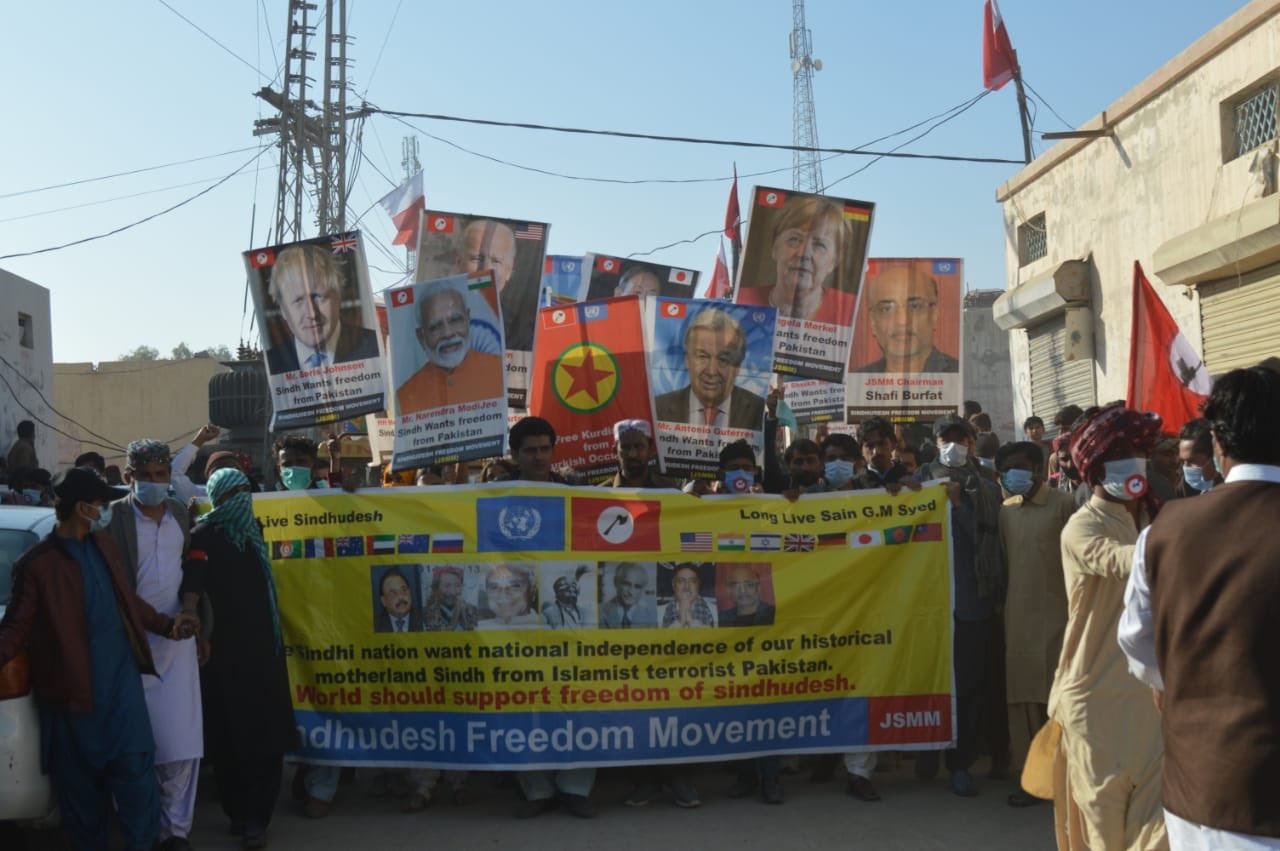 On the 117th birth anniversary of G.M. Syed on 17 January,  placards of  PM Modi and other world leaders were raised by the protestors’ at a pro-freedom rally in Pakistan’s Sindh. It was to seek support and to seek their intervention for the freedom of Sindudesh. Pro-freedom slogans were raised during the rally held in G.M. Syed’s hometown of Sann in the Jamshoro district of Pakistan’s Sindh province.

Sindhudesh is a demand for a separate homeland for Sindhis which emerged in 1967, under the leadership of GM Syed and Pir Ali Mohammed Rashdi. They claimed that Sindh is the home of Indus Valley Civilization and Vedic tolerance to all cultures and beliefs, which was illegitimately occupied by the British Empire and was delivered by them, into the Islamist hands of Pakistan in 1947, where tyranny and subjugation were furthered by Radicalization by the Pakistan Army.

Sindhu Desh is historical truth with an ancient tradition, identity, and culture. Against this background, Pakistan Army for the last 50 years, decided to base its foundation on the false and untrue ideology of Radical Islam, irretrievably, as is realized now. Pakistan since long has inflicted atrocities on the Sindh people, using its state powers. It has created unrest in this region in the name of religion and hatred towards all except Radical Islamists. People of Sindh have all the valid reasons to rise united, against the radical and corrupt tyranny of the Pakistan Army, ISI, and other non State powerful agencies.

The national hero of Sind, Mr. G.M.Syed had started asserting the separate identity of Sindh in the 70s, under the title “Jiye- Sindh Movement” aimed at preserving the cultural heritage, economic independence, and political personality of Sindhi.

Together with Baluchistan which ethnically is closely related to the Sindhi culture (The Brohi and Baluchi elements being strong ingredients of the Sindhi character), the Sindhudesh is a possible political unit in the near future.

Many of the important leaders of the Sindhudesh freedom movement are based in European countries, due to targetting and persecution by Pakistan Army. World Sindhi Congress (WSC) founded in 1988, an advocacy and human right group active in UK, Canada, and the US. The WSC is a global body of Sindhis. The WSC represents Sindhis in the Unrepresented Nations and Peoples Organization (UNPO), which was established in 1991 and is based in Hague.

Kehkashan Haider, a human Rights Activist from the USA, said that Pakistan betrayed Sindh right from the Partition days. Sindhi Muslims are labeled as Mujahirs and they were subjected to untold atrocities and miseries.

“The people of Sindh are deprived of fundamental rights. India was partitioned due to a conspiracy hatched by Mohd Ali Jinnah and the British Government. The situation of the Sindhi people deteriorated soon after joining Pakistan. The Pakistan Army behaved with us in an indecent manner in the name of religion. She said that we are all united for the liberation of Sindhu Desh; we want nothing short of ‘Azadi’ from Pakistan, she said.

She said that Pakistan only bred terrorism in the name of religion. Now we want to come to India. We are proud to be ‘Sindhi Hindustani’. She appealed to the Narendra Modi government to support the Sindhu Desh movement. How politically that blends with the government of India is something which is subject to Politics, however the words do convey the finality, with Pakistan Army’s rule definitely stands rejected by Sindhis also.

Zafar Sahito, Vice-President of Jio Sindh Thinkers’ Forum, USA, said that the Sindhis have always been abused and terrorized by the Pakistani rulers. “Our voice is suppressed in local and international media like that of the Baloch, and Pashtuns. But the people of Sindh have preserved their identity and culture braving the atrocities and tyranny of Pakistani rulers. This is the fight for our identity and culture” he insisted.

“Soon after its creation in 1947, Pakistan has become a headache for the world. It has emerged as the main sponsor of terrorism and India too has since long felt the pangs of this proxy war. The terrorists have the full support of the Pakistan army and they are spreading terror in the world in the name of Islam. It is, therefore, necessary to expose Pakistan Army. With the breaking of Pakistan not only India but also Asia, Europe, and the rest of the world will be free from the poison of terrorism, he said.

It is evident, that the demand is no longer of autonomy, but of independence from clutches of Corrupt and Radicalized Pakistan state machinery, installed there by Pakistan Army.

“Among all these barbaric assaults on its history and culture and all these ages of occupation and dawns of independence Sindh have retained and maintained its separate historical and cultural identity as a pluralist, co-existent, tolerant and harmonious society where all the different cultures, languages, and ideas of the foreign and native people have not only influenced each other but accepted and absorbed the common message of the human civilization.” as stated by Chairman of Jeay Sindh Muttahida Mahaz, Shafi Muhammad Burfat.

The iconic figure, in the struggle to preserve Sindhi culture against the Radical Islamic narrative of Pakistan Army, added “While the Sindh gave India its name, the Sindh citizens who pioneered in the fields of industry, philosophy, marine navigation, mathematics, and astronomy are today chained by the Islam-o-fascist terrorist unconstitutional forced federation of Pakistan by the military might of Punjabi imperialism in the name of Islam.”

He further stated, “Our nation believes in universal peace, unity of humanity and human development and our country has remained as an independent nation on the face of the earth for thousands of years. But today, it is enslaved by Punjabi colonialism in the name of religion and through the might of the military. The Sindhi people do not want to remain in the oppressive slavery of the terrorist state of Pakistan, and therefore, we appeal to the entire international community to step forward and support us in our struggle for national independence from the fascist theocratic Islamist terrorist state of Pakistan.”

“The police found leaflets from the bombing sites in which Sindhu Desh Liberation Army (SDLA), an underground separatist group, claimed responsibility for the attacks,” said Muzaffar Sheikh, a Pakistan Railway Police officer. He said the group had bombed railway tracks in the past also.

Denouncing alleged atrocities against the Sindhi people and vowing to continue its struggle until Sindh’s freedom is ensured, SDLA’s chief commander Darya Khan Marri asks other Sindhis, in the leaflet, to take up arms and join the movement.

The SLDA feels now that, Sindhi separatists must get the same worldwide recognition as the separatists in Balochistan, and asks people to stand up against the “opportunist” People’s Party government, the army, and the ISI.

Sindhi separatist groups, which had never been popular earlier, now are beginning to be seen as the correct course of action. They have taken strength from routine clamor by the world community and even US Congressmen, calling for the right of self-determination for the Baloch people. “Because of bad governance, nepotism, corruption, and incompetence of the ruling elite The Pakistan Army, and their manner power consolidation using Radical Islamists, there is a need to shield younger generation from this among Sindhi people”.

Relatively unknown to the world, the Sindhi nationalism has been running alive, under the shadows of the other freedom-seeking ethnicities like Pashtunistan, Baluchistan, and Pakistan occupied Kashmiris(PoK). The fervor is clearly elicited when demonstrators carried placards reading: “Sindhudesh is our vision, mission, destiny, and motherland”. People also held pictures of Sindhi political activists and leaders who have been abducted or killed for their Sindhi nationalism.

While Pakistan’s constitution recognizes Sindh as its province, activists say that the region has for decades, been subjected to state and non-state entities who committed loot and atrocities. Home to the majority of Hindus, Christians, Ahmadis, and other minorities, the social fabric has been vilified against, with impunity. Here radical and Islamist hate crimes, anti-minority purge, forced conversions, and marriages based on ultra Islamist principles on almost every day basis, and any resistance against fundamentalism is muzzled with police high-handedness (under pressure from Pakistan Army) and the activists are labeled as terrorists and killed/tortured.

Pakistan Army stooge businessmen have been given lands and made to establish a business for benefit of the Chinese, just the way it is been done in Baluchistan. In recent years, deposits of natural gas, chromite, coal, gypsum, limestone, petroleum, and other mineral have been found in Sindh.

The rich deposits of copper, iron, chromite, lead, zinc are discovered in large quantity, as well as a good quantity of coal has also be found in Thar in the province of Sindh. The production of barite, bentonite, various types of industrial clay ochre, and silica sand has also found. All these are being handed over to the Chinese virtually free, against kickbacks and bribes being received by Pakistan Army Officers and powerful elite Politicians.

Now, G M Syed’s spirit reverberates again. Seeking self-determination for Sindh, Syed stayed, “incarceration” for the greater part of the life of Pakistan. At the world Sindh Congress in London, Syed Mohammad Shah, a former member of the Sindh Assembly recalled the separation of Bangladesh and had said: “ I foresee a situation building up towards that again, millions of Sindhis have been deprived of their livelihood, we have become third-grade citizens.

“We now demand implementation of the 1940 resolution for self-determination for the constituent peoples of Pakistan”, he had demanded, and the same spirit now runs in Sindhis once again, as they see little turning around, from the deteriorating slide that Pakistan Army has subjected Pakistan to, since last 50 years of Radicalization and this decade’s sellout of Pakistan, to China.