Some people creating conflict in name of religion and ideology, need to strengthen our voices: NSA Doval 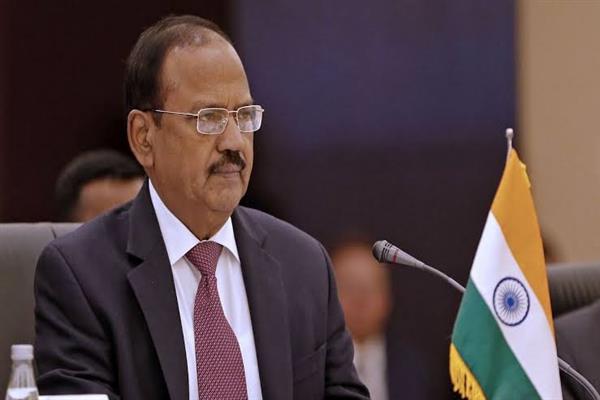 National Security Advisor (NSA) Ajit Doval on Saturday said that some elements were creating acrimony and conflict in the name of religion and ideology and noted that there was a need to work on the ground and “strengthen our voices”.  He was speaking at an interfaith harmony meeting organised by the All India Sufi Sajjadanashin Council (AISSC) in Delhi. “Some elements are trying to create an atmosphere that’s vitiating the progress of India. They’re creating acrimony and conflict in the name of religion and ideology, it’s affecting the entire country while spilling over outside the country too,” Doval said.  “Instead of being mute spectators, we have to work on the ground on our differences along with strengthening our voices. We have to make every sect of India feel that we are a country together, we are proud of it & that every religion can be professed with freedom here,” he added.  The National Security Advisor emphasised the need to maintain unity together and said every citizen will benefit from the country’s progress.  “There’s an atmosphere of conflict in the world, if we have to tackle that atmosphere, it’s important to maintain the unity of the country together. The way India is progressing will benefit people from all religions,” he said.  The resolution adopted at the meeting said organisations like the Popular Front of India (PFI) and any other such fronts, who have been indulging in anti-national activities and creating discord amongst our citizens must be banned and action initiated against them as per law.  The resolution said that targeting any God/Godesses/ Prophets in discussions or debates by anyone should be condemned and dealt with as per law.  Hazrat Syed Naseruddin Chishty, Chairman of All India Sufi Sajjadanashin Council, said in his remarks that radical organisations should be checked. He also demanded a ban on PFI.  “…We condemn when an incident occurs. It’s time to do something. Need of hour to rein in and ban radical organisations. Be it any radical organisations, including PFI they should be banned if there is evidence against them,” Chishty said.  The AISSC resolution proposed to create a new body, inclusive of all faiths, to spread the message of peace and harmony and to fight against the radical forces.  The resolution recommended that any person or organisation found guilty with evidence of spreading hatred among the communities through any means must be acted upon as per the provisions of law.  The aim of the dialogue was to have a rigorous discussion among the representatives of different faiths – Hindu, Islam, Christianity, Sikhism, Buddhism and Jain – about the growing religious intolerance in India.  The AISSC said in its release that the nation is going through tough times because of certain anti-social elements and groups who are trying to distort the image of India as a shining example of unity in diversity.