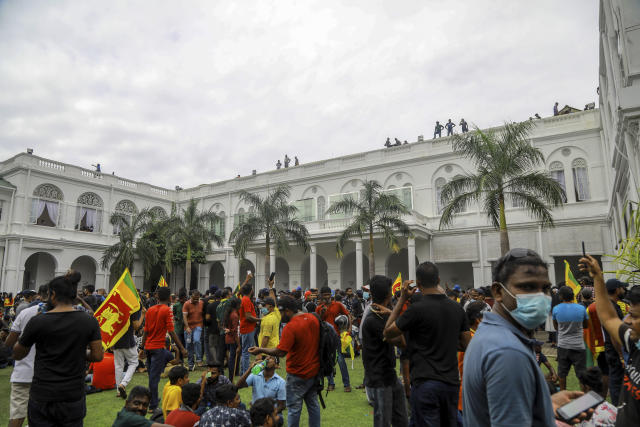 Thousands of protesters in Sri Lanka’s commercial capital Colombo stormed the president’s official residence and secretariat on Saturday amid months of mounting public anger over the country’s worst economic crisis in seven decades.

According to defence ministry sources, Sri Lankan President Gotabaya Rajapaksa was moved to the Army headquarters after intelligence reports suggested that the situation may go out of control.

According to reports, some protesters, holding Sri Lankan flags and helmets, broke into the president’s residence.
Thousands of protesters also broke the gates of the sea-front presidential secretariat and the finance ministry, which has been the site of a sit-in protest for months.

Military personnel and police at both locations were unable to hold back the crowd, as they chanted slogans asking President Gotabaya Rajapaksa to step down.

Two defence ministry sources said President Rajapaksa was removed from the official residence on Friday for his safety ahead of the planned rally over the weekend.

Meanwhile, Prime Minister Ranil Wickremesinghe has summoned an emergency party leaders meeting to discuss the situation and come to a swift resolution.

On 8 July, an indefinite curfew was imposed across Sri Lanka’s capital and the military placed on alert ahead of a planned rally demanding the ouster of the embattled President.