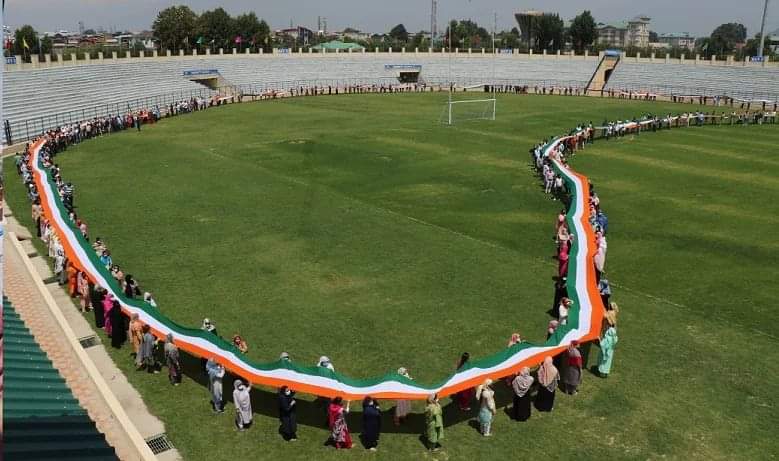 To mark the celebrations under ‘Har GharTiranga’ campaign as a part of ongoing ‘Azadi ka Amrut Mahotsav’, the District Administration Srinagar Sunday established a National record by displaying 1850 Metres long National Flag at Bakshi Stadium to celebrate 75 years of Independence.

The first ever largest flag holding ceremony in Jammu and Kashmir was presided over by the Chief Secretary, Dr Arun Kumar Mehta.

The Deputy Commissioner Srinagar, Mohammad Aijaz Asad and all District & Sectoral Officers, besides 5000 citizens gathered together at the venue to take part in the National Flag holding ceremony to mark 75 years of Independence under Har GharTiranga campaign as a part of Azadi ka Amrit Mahotsav.

On the occasion, the Chief Secretary took a round of the stadium to inspect the 1850 metres long  flag held/displayed by thousands  of citizens to mark the celebrations under ‘Har GharTiranga’ campaign.

Speaking on the occasion, the Chief Secretary lauded the efforts of the District Administration Srinagar for organizing such a grand event of displaying the 1850 meters long National Flag that instils the spirit of nationalism, sacrifice and fraternity amongst the citizens.

Deputy Commissioner, Srinagar also spoke on the occasion and appreciated all the participants for making the event a grand success.

Pertinent to mention that, around 500 persons were engaged to roll and unroll the 1850 meters long Flag as per the National Flag Code. Besides, it took 10 days to stitch the record 1850-meter-long national flag.

It is also worth mentioning that the 1850 Metres long national flag unfurled today at Bakshi stadium is one of the longest national flags of its kind displayed in the country. The Flag was made of Khadi Fabric.