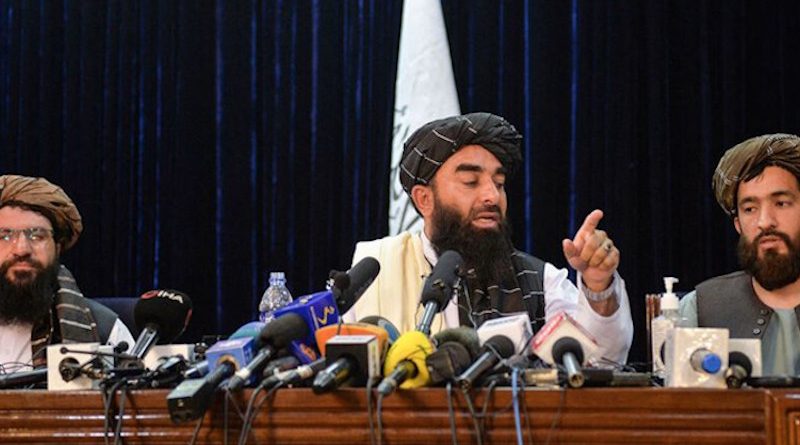 The Taliban takeover of Afghanistan perpetuates a paradigm of failed governance in the Muslim world based on a centuries-old alliance between Islamic scholars and the state that, according to scholar Ahmet T Kuru, explains underdevelopment in many Muslim-majority states and authoritarianism in most.

The takeover also highlights that, in a twist of irony,  a majority of competitors for Muslim religious soft power, leadership of the Muslim world, and the ability to define Islam have as much in common as they have differences.

The takeover further spotlights the Muslim world’s struggles to free itself from the shackles of a paradigm that is at the root of its ills. That struggle has expressed itself in a decade of protest, dissent, defiance, and often brutally suppressed or derailed popular revolts as well as the self-defeating flight into militant and jihadist interpretations of the faith that fail to recognize that their radical view is nothing else but another variant of a failed model.

Neither do the other major religious soft power contenders, with the exception of Nahdlatul Ulama, one of the world’s largest, if not the largest Muslim organization based in Indonesia, irrespective of the ideological bent of their religious vision.

Nahdlatul Ulama, a politically influential civil society movement, is the only non-state player in what amounts to a battle for the soul of Islam that will determine the degree to which a moderate Islam incorporates principles of tolerance, pluralism, gender equality, secularism, and human rights as defined in the Universal Declaration of Human Rights.

The other major contenders include Saudi Arabia, the United Arab Emirates, and Qatar, proponents of a state-led moderate form of Islam that propagates absolute obedience to the ruler; Turkey that pushes a Turkic-centric and nationalist state-controlled interpretation of the faith, and Iran that is ruled by the clergy.

“Some ‘moderates’ think that Islam should be controlled by the state… The result is strengthening of the ulema-state alliance and its authoritarianism. Radicals. on the other hand, have sought a unification; claiming that Islam is both religion and the state,” Mr. Kuru said in an email exchange with the author.

The contenders, again except for Nahdlatul Ulama, insist that there is not only one religious but also only one political truth. Nahdlatul Ulama officials say that the movement’s most influential ‘spiritual’ wing argues the diametrically opposite despite a diversity of views within their ranks.

“The spiritual wing of the Nahdlatul Ulama teaches the duty to find the truth… Don’t try to impose your opinion and your so-called perception on other human beings. Nobody knows if you are correct or if you’re wrong… The spiritual ulema strive to know the truth rather than proclaim the truth,” said a prominent figure in the movement.

Taliban-ruled Afghanistan is not a major contender in the battle for the soul of Islam but revives the country’s adherence to Mr. Kuru’s paradigm.

The Middle Eastern contenders in the battle have more than just the ulema-state paradigm in common. Some also share an arbitrary attitude towards the sanctity of private property.

Authorities in Saudi Arabia, Egypt and Turkey have in recent years confiscated some US$135 billion in assets and cash as part of naked power grabs and crackdowns on political opponents that appeared arbitrary rather than anchored in legally credible procedures.

The confiscations cast a shadow over economic reform efforts, hinder unfettered economic development and stymie innovation at a moment that oil producers’ ability to continue to rely on export revenues may be diminishing.

In a just-released study, Mr. Kuru calls for the replacement of the ulema-state alliance with “open, meritocratic, and competitive systems where the political, religious, intellectual, and economic classes are able to operate autonomously, and none is able to dominate. Such reform requires the expansion of freedom of thought, by abolishing apostasy and blasphemy laws, and deeper protection of private properties by preventing the state’s seizure of them. The reform also necessitates an institutionalisation of separation between religion and the state.”

Muslim autocrats and authoritarians, in contrast to China, which has experienced phenomenal economic growth directed by an autocratic regime, perpetuated under- or lop-sided economic development by maintaining the ulema-state alliance, creating rentier states in resource-rich countries, and failing to invest in education and bureaucratic efficiency.

Shifting the paradigm may constitute a challenge that few Muslim rulers are likely to accept. Sounding on an optimistic note, Mr. Kuru argued that the fact that rentier oil-producing states will need to diversify their economies may leave rulers with little choice.

“Oil rents have funded ulema-state alliances for the past five decades. Soon, these rents may lose their importance with the depletion of reserves, rise of domestic consumption, and/or innovation of alternative energy technologies. Many Muslim countries will need economic restructuring and innovations to be prepared for the challenges of the post-oil era. To maintain long-term stability and prosperity, these countries need to build productive systems that encourage entrepreneurship. Such reform requires that the ulema-state alliance ceases to control socio-political life,” Mr. Kuru said.

Mr. Kuru suggests that his prescription is not without precedent in Islamic history. The Muslim world’s golden age that lasted from the 8th to 11th century was enabled by intellectual and mercantile classes that could drive scientific and economic progress because it enjoyed “a certain degree of separation” from its political rulers.

“During the same time period, Western Christian societies had almost the opposite characteristics. There was a strong alliance between the Catholic church and royal authorities, while the philosophical and merchant classes were either non-existent or very weak. Western Christian countries were places of religious orthodoxy and intolerance in comparison to their Muslim counterparts,” Mr. Kuru said.

The 11th century is when the Muslim and Christian worlds reversed roles. The Muslim world moved towards the ulema-state alliance and militarisation while Europe institutionalized the separation of state and church.

Europe witnessed the opening of universities and the rise of commercial city-states while the Muslim world experienced the emergence of a stifling feudal economy, the origins of sectarianism, the marginalization of private landowners and merchants, and the dominance of narrow-minded religious education.

To be sure the facets of post 11th century Muslim society have evolved over the centuries as the world moved forward and as a result of social, economic, technological, and political advances. Muslim-majority countries today all have the attributes of a modern state. They embrace economic reform, social change, and technological innovation to varying degrees, and political change not at all.

In the 19th century, Ottoman and Egyptian reformers reduced the power of the ulema by absorbing their role rather than creating space for a more independent intelligentsia and merchant class. So did 20th century secularist leaders who viewed intellectuals and independent businessmen as threats to their grip on power that they sought to legitimize with Islam.

These 20th-century leaders revived the ulema state alliance in different forms, including the creation of institutions Turkey’s Directorate of Religious Affairs or Diyanet or the state-encouraged and controlled Islamization of countries like Egypt and Pakistan.

Taken to its logical conclusion, Mr. Kuru argues that current ‘moderate’ Muslim rulers, as well as jihadists and militants, misinterpret Muslim history in ways that justify their autocratic rule and give them an edge in the battle for the soul of Islam yet are not born out by historical research.

The golden age of Islam teaches the opposite. The norm then was a degree of ‘separation of church and state,’ not the control of religion by the state advocated today by statist moderates and radicals alike.