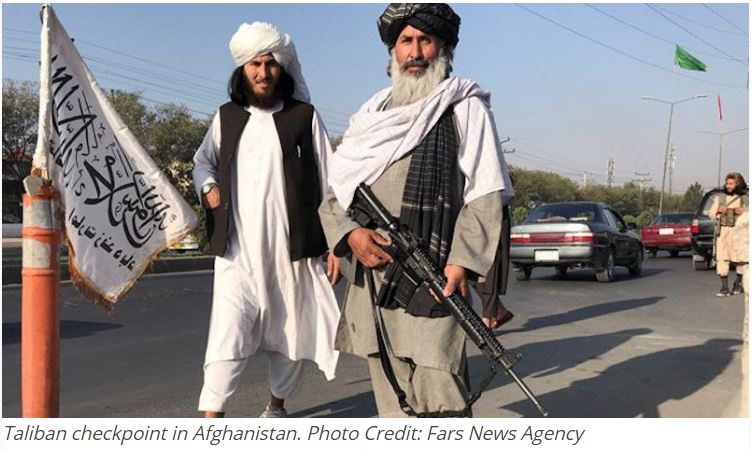 The notion that religious ultra-conservatism may not remain contained to Afghanistan may be one reason why US President Joe Biden decided to effectively abandon Central Asia with his withdrawal of US forces from the Central Asian country.

“Islamic militancy will cause Russia and China heartburn. It makes sense for the United States to say: ‘This is not an American problem. We are out of here. The Chinese and Russians can deal with it. Going forward we will focus on what is important, the Indo Pacific,’” said a non-American government official empathetic to US concerns.

“The ironic truth for China is that the only thing worse than US soldiers near its borders is not having them there at all,” added Bloomberg columnist Shuli Ren.

Mr. Biden’s decision may also constitute a choice to allow Pakistan, unable to break away from looking at the world through the prism of its troubled relationship with India, to stew in its own juice as it attempts to ensure that the Taliban remain part of a pro-Pakistani bulwark against the subcontinent’s predominant, and like Pakistan, nuclear power.

Trying to make the best of a complex situation, Pakistan, with China not far behind, hopes that a Taliban-dominated government will favour infrastructure projects that boost the attractiveness of the Chinese-backed Pakistani port of Gwadar as a maritime gateway to landlocked Central Asia.

The subcontinental divide cuts through multiple layers, including religion and the fact that the US and Saudi-backed jihadist insurgency that defeated the Soviet Union in Afghanistan in the 1980s has made the Central Asian state as well as Pakistan more susceptible to ultra-conservative Muslim precepts such as the Taliban’s repression of women and blasphemy hysteria in Pakistan.

The Taliban as well as a significant number of Pakistani ultra-conservatives root their worldview in Deobandism, a strand of Islam that emerged in India in the mid-19th century to oppose British colonial rule by propagating an austere interpretation of the faith. Deobandism became prevalent among Pashtuns even if Deobandis in Pakistan, Afghanistan and India went their separate ways after the 1947 partition of the subcontinent.

The divide was widened by Pakistani use of militants as proxies even before the 1979 Soviet invasion of Afghanistan, President Zia ul-Haq’s Islamization of Pakistan, the anti-Soviet jihad, and massive past Saudi support for militant Pakistani and Afghan Deobandis and their madrassas or religious seminaries.

Islamic scholars in the Deobandi alma mater in the Uttar Pradesh town of Deoband highlighted the divide earlier this month by seeking to distance themselves from their Afghan and Pakistani brethren.

Arshad Madani, the principal of the Darul Uloom Deoband, the original Deobandi madrassa established in 1886, welcomed a decision by India’s Anti-Terrorist Squad (ATS) to set up a training centre in Deoband.

“There is nothing wrong with what we teach, and we welcome the ATS staff to be a part of our classes whenever they like,” Mr. Madani said. A spokesman for the madrassa added that “we are a religious school, but we are also Indians. To doubt our integrity every time the Taliban spread terror is shameful.”

Deobandism nonetheless adds a hard religious edge to Pakistani support of the Taliban that is reinforced by the rise of Hindutava or Hindu nationalism in India spurred by Prime Minister Narendra Modi.

As a result, Pakistani military and government officials have supported the Taliban in recent days by advising the United States to respect the group’s August 31 deadline for an end to US evacuation operations in Afghanistan so that the group can move forward with forming a government. The Taliban said they would only form a government once US troops have left Afghanistan.

The advice strokes with the Pakistani military’s long-standing effort to persuade the United States to negotiate an end to the war with the Taliban even before they gained control of Afghanistan, a development Pakistani officers believed was inevitable. The US ultimately followed that advice when it began negotiating with the Taliban in early 2019.

The Biden administration insisted it would abide by the Taliban’s deadline despite the attack on Friday on Kabul’s international airport in which at least 175 people were killed, including 13 American military personnel.

“Pakistan’s military echelons knew that the US would leave and wanted to accelerate the departure. With this understanding, Rawalpindi invested primarily in the Taliban. Rawalpindi’s desire was to ensure a friendly establishment in its northwestern neighbouring nation, which doesn’t get exploited against Pakistan’s interests, especially by India,” said Pakistan scholar Ayesha Siddiqa. Ms. Siddiqa was referring to Islamabad’s sister city, where the military is headquartered.

The investment over 27 years has produced mixed results. It certainly did not translate into the Taliban doing Pakistan’s bidding. The Taliban Papers, a cache of leaked Pakistani foreign ministry cables written in 2000 and 2001 before the 9/11 attacks and the US invasion of Afghanistan illustrate the panic at the time among Pakistani officials because they had lost control.

“The Pakistani establishment maintains close relationships with the Taliban, though with a decreasing level of influence… but both sides continue to profit from one another,” said Pakistan scholar Mohammad Luqman.

Lieutenant General Faiz Hameed, director-general of Inter-Services Intelligence, Pakistan’s primary notorious omnipresent intelligence arm warned members of parliament in a closed-door briefing in the presence of army chief General Qamar Javed Bajwa that Pakistan was losing influence over the Taliban. The general was speaking in early July as the Taliban were advancing in the Afghan countryside.

Pakistani support for the Taliban is a double-edged sword. The question is whose worldview will be exported: Will the Taliban emulate aspects of Pakistan’s tarnished democratic façade, or will the group’s ultra-conservative religious outlook gain further momentum in Pakistan?

One doesn’t exclude the other.

Ms. Siddiqa described Taliban spokesman Zabihullah Mujahid’s promise that Afghan media would be free as “a reminder of similar assurances about media freedom by Pakistan’s generals, which makes one realise the effort afoot to make a Taliban-led regime look increasingly like Pakistan (or even India): Hybrid-authoritarian and hybrid-theocratic… This is where the real problem for Pakistan begins: There is too much opacity around what Pakistan can deliver and what it cannot.”

Fertilization may however be a two-way rather than a one-way road.

While Pakistani fears that the Taliban victory will give a violent boost to Tehrik-i-Taliban Pakistan (TTP), the Pakistani Taliban that has close ties to their Afghan kin, the Kabul Taliban may not need the help of the militants who have started to again launch attacks inside Pakistan even before the Taliban capture of Afghanistan.

The Taliban victory benefits from decades in which religious ultra-conservatism was woven into the fabric of Pakistani society as well as some of its key institutions.

Islamist Jamaat-e-Islami leader Sirajul Haq has already used the triumph to demand a sharia-based system in Pakistan. To be fair, Mr. Haq at the same time condemned the harassment of a Pakistani girl in Lahore for not wearing a traditional shawl. Similarly, Fazal ur-Rahman, the head of Jamiat Ulema-e-Islam (JUI), another Islamist party, congratulated the Taliban on their takeover of Afghanistan.

Indian media reported that fugitive Jaish-E-Mohammed chief Masood Azhar, a violent Pakistani Islamist believed to have support from with the Pakistan armed forces and intelligence, had met Taliban leaders in Kabul in recent days to solicit support for stepped-up operations in disputed Kashmir. The reports could not be confirmed independently, nor did it seem likely that this would be the Taliban’s first order of business.

Said Ms. Siddiqa: “The fact remains that, notwithstanding the ambition to mellow the tone of religion in Afghanistan, Pakistan itself runs the risk of becoming more like its northwestern neighbour – more religious and more authoritarian.”

It is a concern that has not been lost in Islamabad where officials have been pushing the Taliban to opt for a truly inclusive government. A visit last week to the Pakistani capital by representatives of the anti-Taliban Northern Alliance and other Afghan politicians suggested that Pakistan was seeking to broaden its Afghan network beyond the Taliban.

“Ironically, Islamabad sought strategic depth against New Delhi by supporting the Taliban in Afghanistan. Now, Taliban rule in Afghanistan will provide Pakistani jihadis with the strategic depth to launch attacks against Islamabad. For Pakistan, the chickens are coming home to roost,” said Abdul Basit, an analyst at Singapore’s S. Rajaratnam School of International Studies.