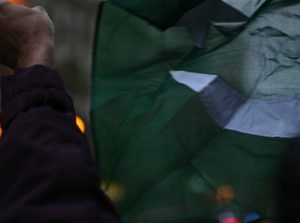 Recent by-elections for a National Assembly seat in Karachi resulted in the Pakistan People’s Party (PPP) defeating the Pakistan Muslim League-Nawaz (PML-N) by a narrow margin of 909 votes.

However, it is the performance of the Tehreek-e-Labbaik Pakistan (TLP), a “religio-political party with an extremist agenda,” that captured media attention. The TLP managed to come in third in the electoral contest on April 29.

The TLP’s performance is significant. The party was banned by the Pakistan Tehreek-e-Insaaf (PTI) government on April 15 this year. Despite being designated a terrorist organization, it was allowed to contest the by-election. And it performed well.

While the PPP and PML-N candidates secured 15,656 and 14,747 votes respectively, the TLP came in third with 10,668 votes. Not only did the TLP manage to secure a significant number of votes in an election that saw a low turnout, but it also performed better than the ruling PTI.

Its performance indicates the groundswell of sympathy and support it has been able to build up over a short span of time.

This isn’t the first time that the TLP contested elections. In 2018, although it failed to win any seats to the National Assembly, it managed to win two seats to the Sindh provincial assembly. It also did better than the PPP in the Punjab assembly elections.

Founded by hardline Sunni Barelvi cleric Allama Khadim Rizvi in August 2015, the TLP sees itself as the guardian of Prophet Mohammed’s honor and of Pakistan’s blasphemy laws.

Its strength lies in its street power. Not only have its demonstrations paralyzed daily life in Pakistan’s cities but they have also been successful in forcing the government to concede to its demands. To end the TLP’s blocking of the Islamabad-Rawalpindi highway in December 2017, for instance, the PML-N government conceded to the TLP’s demands, even removing federal Law Minister Zahid Hamid.The PTI government too has repeatedly capitulated to the TLP’s demands.

The immediate trigger for the recent ban on the TLP was the three days of violence it unleashed on Pakistan when its leader Saad Hussain Rizvi was arrested on April 12. Rizvi had given the government until April 20 to implement its demands to cut diplomatic ties with France. The TLP had raised the issue during its protests in late 2020 following French President Emmanuel Macron’s endorsement of the publishing of caricatures of Prophet Mohammed. To defuse the protests then, the Imran Khan government conceded to all the TLP demands.

Since January the TLP, now under Saad Hussain Rizvi’s leadership, began pressing the government to implement the agreement reached earlier. The government reached yet another agreement with the TLP, under which it said it would place the terms of the earlier deal before parliament. With the possibility of another protest looming, the government decided to arrest Rizvi and ban the TLP.

In dealing with the TLP the PTI government has lurched from one extreme to another. On the one hand, it has appeased the TLP and done deals with it. On the other, it has banned the party.

The PTI government’s handling of the TLP raises several questions. Will its proscription help reduce its capacity for violence or discourage it from pursuing the path of violence? In all likelihood, the ban on the TLP could push the more hardline elements among its ranks to take up arms against the state.

After banning the TLP, the government allowed it to contest the election as it didn’t want to alienate the Islamists. In the process, it provided the group with electoral legitimacy. Sympathy for the TLP manifested in its relatively robust performance in the Karachi by-election.

The Imran Khan government’s confused strategy toward the TLP is enabling its survival.