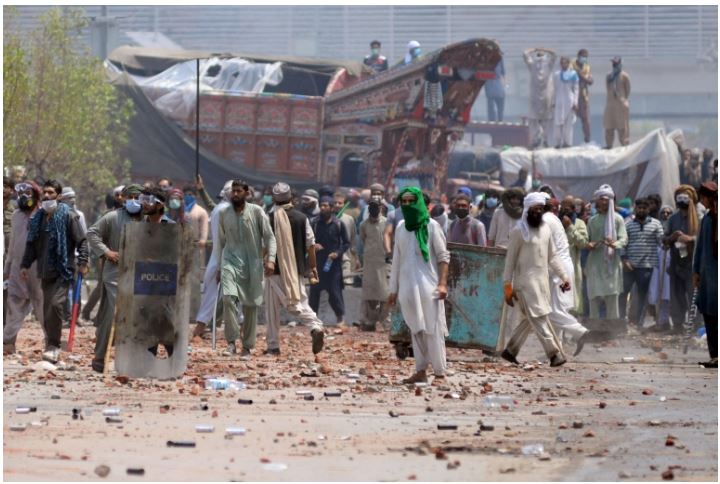 Within Pakistan, the rise of TLP is the result of securitisation of internal politics, with the military backing its favourite group of the moment.

It’s now official. Pakistan blocked all social media access across the country, reflecting the dire state of the nation as it faces street protests by the conservative Tehreek-e-Labbaik Ya Rasool Allah or the TLYRA that have already injured over 40 and killed an unknown number of policemen and protesters. The State says the ban is temporary, but the lull in the protests and violence may be equally brief.

Though a newbie in the world of Pakistan’s toxic Right-wing politics, the group is no pushover. In the five short years of its existence, it has gained heft, and is now taking the State head on, leading to a situation that is in some ways worse than what even neighbouring Afghanistan is going through. After three decades of war, Afghanistan is barely a State. Pakistan is, at least on the outside. But the current collapse of order, with even Prime Minister Imran Khan publicly excusing action against Tehreek-e-Labbaik, is a symptom of severe trouble within a nuclear weapon State.

The three-day chaos saw severe violence across Pakistan, including in Islamabad, Rawalpindi, Karachi and elsewhere as supporters of Tehreek-e-Labbaik Pakistan (TLP) went on the rampage to protest the arrest of their young 26-year-old leader who had dared the State. Social media was awash with pictures of bleeding policemen and Rangers, indicating the seriousness of the situation.

All this comes at a very awkward time for Rawalpindi.

For one, a country that is at war with itself is hardly capable of playing peacemaker in Afghanistan, even while it is itself under pressure from the Financial Action Task Force (FATF) to end its support to more than three dozen or so terrorist groups operating both to the east and the west. Second, the severe erosion of internal security – not to mention the internet ban, however ‘temporary’ – gives it a weak hand in the reportedly ongoing secret talks, especially since Delhi may already see Pakistan Army Chief General Qamar Javed Bajwa’s peace overtures as arising from severe financial weakness and economic decay. Add to that, the current social chaos, and there’s going to be a lot of hand-wringing somewhere.

The setting for the rise of the right

Within Pakistan, the rise of TLP is a clear result of the securitisation of internal politics, with the military or factions within it backing its favourite group of the moment. As a result, there is competition within groups for patronage. In the present case, competition between the Barelvis represented by the TLYRA, and the Deobandis who are aligned with the much harsher Wahhabism is fueled by access to better funding and power through control over madrassas. In the process, the Barelvis have turned further to the Right to cater to the rising extremism apparent in the general populace because of a direct result of the army’s divide and rule approach inside the country, and its support to militancy outside.

Few places in the world have seen such societal deterioration as Pakistan. Notably, despite the provocation of the Charlie Hebdo cartoons, no Islamic country has severed ties with France. Such instability hasn’t been seen even in war-torn Afghanistan. Diplomats and foreign citizens work under daily threat from the Taliban, but have never been in any danger from the larger population. In Pakistan, #FranceLeavePakistan saw more than 55,000 tweets. Afghanistan has its Shias who have lived in amity with others for decades with even an Islamic Brotherhood Council to ensure cooperation. Even after attacks against it by the Islamic State, the Shias themselves have not faced hostility from the locals. Blasphemy has never been an issue in tribal communities in particular, where the village leader has always had more clout than the mullah. In fact, despite the best efforts of Pakistan, it is not Afghanistan, which is societally radicalised and divided. It’s Pakistan. The TLP is a classic example of the chickens coming home to roost. And they’re not going anywhere just yet.

What’s with the TLP?

There is now enough in the public domain about the group, registered as Tehreek-e-Labbaik Pakistan with the Election Commission in 2015, with a manifesto that seemed relatively harmless, compared to hot heads like the Jamaat-ud-Dawa. But it is unabashedly anti-Shia, against all ‘foreign influences’ and came together under the leadership of a man who thrived on implementation of the harsh provisions of the Pakistan Penal Code against blasphemy. Those provisions have led to frequent attacks against minorities and Shias across the country on the slenderest of pretexts. Experts also point to the fact that Pakistan’s constitution has more Islamic clauses than nearly 40 other such States, with only Saudi Arabia and Iran competing for the top spot. So there’s enough material for any ambitious extremist to work on. And that’s what Khadim Rizvi, a former lowly auqaf worker in the Punjab government did in 2011, creating the group that started a series of agitations and violence, including one as ridiculous as alleging blasphemy against the country’s law minister Zahid Hamid, simply over changing the wording of an oath for prospective legislators. The violence was ended after the minister’s resignation and the military playing broker, famously, with Major General Navid Hayat, DG of Punjab Rangers, filmed paying money to the protesters.

All this made for great publicity, which led Khadim to contest elections in 2018 that essentially ate into Nawaz Sharif’s vote bank in Punjab. The TLP garnered 2.5 million votes across the country, and a newbie Right winger emerged as the fifth largest party. That this immensely helped the establishment’s vicious campaign against Sharif goes without saying.

But somewhere thereafter, the puppet turned master. More protests followed in 2018, this time on the issue of Aasia Bibi, a poor Christian woman acquitted of blasphemy by the Supreme Court. Khadim was heard calling General Bajwa a ‘Qadiani’, a religious slur in Pakistan — this when Bajwa had performed the nikah ceremony for his son. The cleric had been ‘turned’ from an asset to a scourge.

Matters came to a head in the aftermath of the Paris attacks in 2020. The attacker, Ali Hassan, who was a Pakistani, was unsurprisingly a follower of the firebrand Khadim Rizvi. Pakistan again erupted into violence. As French President Emmanuel Macron condemned the Right-wingers, the TLP took to the streets, with demonstrations demanding a complete snapping of ties with France, a boycott of French products and release of its cadres. Prime Minister Imran Khan raged on television, and a huge operation seemed imminent, until a visit by the Army chief led to negotiations instead. The group triumphantly announced on 17 November last year that all its demands, including the expulsion of the French ambassador, had been met. Two days later, Rizvi was pronounced dead, shortly after a meeting with security forces, under suspicious circumstances.

Chaos and the TLP

Khadim’s son Saad Hussain Rizvi was declared the Ameer at the highly charged funeral. Under the young leader, the group was soon messaging furiously on Twitter and other social media platforms, extending its reach and leading it to do well in by-elections in Sialkot, Tharparkar, Nowshera, among others. In other words, it was gaining a national signature. By February, the new Ameer was demanding the implementation of the Faizabad Agreement 2020, reached between his father and the government on expulsion of the French ambassador, signed by no less than the interior and religious affairs minister, as well as the Islamabad deputy commissioner. Frenetic dialogues later, the government agreed to table its demands in parliament before 20 April, thus seemingly buying Islamabad some time. But it was not to be. Saad Hussain declared that the French ambassador should be expelled well before Eid.

Somewhere something clicked. The leader was picked up in broad daylight in Lahore as the police allegedly filmed and put out the arrest video on social media. The result was serious violence with the police and the Rangers bearing the brunt. Videos, however, showed army deployment, some of whom seemed to be leading the protests rather than stopping them.

Pakistan’s interior minister Sheikh Rashid – long an eager army pawn – declared that an order to proscribe the TLP had been moved. The order is now out, and declares rather weakly that the TLP is engaged in terrorism, because among other things it “overawed” the government. That’s a rather questionable action since the members of the alleged terrorist group are elected representatives in parliaments. Pakistani journalist Najam Sethi argues that the charge of terrorism – under 11 B of the Anti Terrorism Act 1997 — might have been used to circumvent constitutional provisions that apply to the Supreme Court adjudication in the case of a political party. It’s also ironic that the prime minister is on record in supporting the TLP previously, and his cadres had joined it in protests when he was in opposition. This is the anomaly that is Pakistan. A group that became expert in protests under the protection of the administration, has now become the target. Meanwhile, French citizens have been advised to leave the country due to serious threats. They may as well pack for the long haul. Everything indicates that the war has come home, even as it stays off the papers, for now.