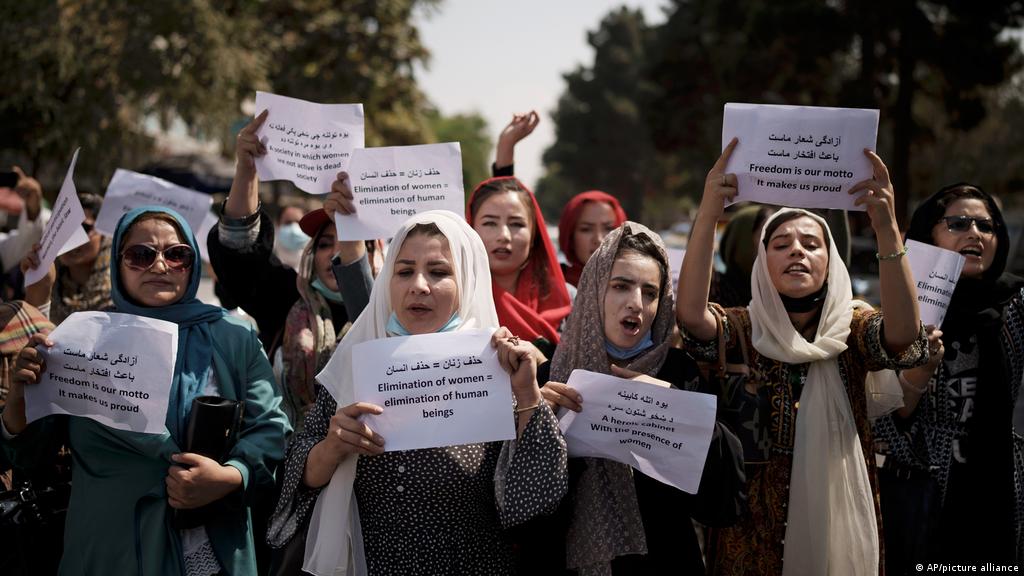 Formed in 1994, the Taliban were made up of former Afghan resistance fighters, known collectively as mujahedeen, who fought the invading Soviet forces in the 1980s. They aimed to impose their interpretation of Islamic law on the country and remove any foreign influence. After the Taliban captured Kabul in 1996, the Sunni Islamist organization put in place strict rules where women had to wear head-to-toe coverings, weren’t allowed to study or work, and were forbidden from traveling alone. TV, music, and non-Islamic holidays were also banned.  Though the Taliban remained on the other side of the fence during the US presence in Afghanistan, they quickly invaded all the major Afghan cities at the offset of the US military.

It’s been over a month since the Taliban seized control of Afghanistan. With half a million people displaced since the withdrawal of the coalition military, millions of people fleeing the country at the onset of the Taliban rule, a collapsing economy and raging unemployment, a possible internet shut down, and a major humanitarian crisis at the hands of the interim government composed of terrorists and extremists, stability in Afghanistan is still a far-fetched dream.

An Uncertain Future For Afghan Women

Women and children are increasingly bearing the brunt of the violence and continue to be at risk of targeted attacks. Afghan women makeup around half of all civilian casualties. Afghanistan has been the deadliest place for children for the past six years. The Taliban gets to control what women wear, how much they can study, put restrictions on women’s place of work, and decide when women will get married. Women in Afghanistan face rising levels of domestic violence, abuse, and exploitation. Women fear to even leave their home under Taliban rule and are barred from leaving home without a male relative.

Taliban spokesman Suhail Shaheen says the group will respect the rights of women and minorities ‘as per Afghan norms and Islamic values’.  Taliban officials have said women will be able to study and work in accordance with sharia law and local cultural traditions, but strict dress rules will apply. However, a few days ago, they said they would open schools for high school-aged boys and male teachers but made no mention of the country’s millions of women educators and girl pupils. Many are questioning how much they would respect women’s rights after this incident.

Over the past 20 years, progress has been made on the number of girls receiving an education in Afghanistan, but over the past few months attacks on schools and villages dramatically increased while international support has slowly withdrawn. It is feared that 1 million children will miss out on education. In July, a group of Afghan schoolgirls shared their fears with an online publication. “As the fighting increases day by day, it’s a concern that we’ll go back in time,” one 15 year old said.

Amidst the conservative Taliban rule and restrictions on women’s education, Higher Education Minister Abdul Baqi Haqqani, in the Taliban interim government ordered gender segregation and mandatory hijabs for women in colleges and universities. The plan mentions bisecting classrooms, cubicles with curtains fitted with jaalis, and separate shifts for women and men in schools and universities. For now, most universities have proposed that women be allowed to attend classes from behind curtains or cubicles, or transferred to institutes in provinces they come from.

Nobel Peace Prize winner Malala Yousafzai, who was shot by a Taliban gunman in Pakistan for advocating for girl’s education, pleaded with the world leaders to not compromise on the protection of women’s rights and the protection of human dignity. In a panel on girl’s education in Afghanistan on the sidelines of the United Nations General Assembly, Malala emphasized ensuring the rights of Afghan women are protected, including the right to education.

Recently, women holding a pro-Taliban rally in Kabul were seen saying Afghan women wearing make-up and in modern clothes “do not represent the Muslim Afghan woman” and “we don’t want women’s rights that are foreign and at odds with sharia” – referring to the strict version of Islamic law supported by the Taliban. These women were seen in black dresses that cover the entire body from the top of the head to the ground.

This was met with a lot of criticism from Afghan women globally, including Mursal Sayas, a master trainer at Afghanistan Human Rights Commission who responded to this incident with, “The fashion statement behind these clothes that cover even the women’s eyes is coercion, bullying, and non-recognition of women’s choices and rights.” This was a mutual feeling with a lot of people.

Afghan women have started a powerful online campaign to protest against the Taliban’s strict new dress code for female students and the burqa worn by women at the pro-Taliban rally. Using hashtags like #DoNotTouchMyClothes and #AfghanistanCulture, many are sharing pictures of their colourful traditional dresses. Women are also protesting about linking chadari or burqa to Afghan women. “Chadari came to Afghanistan during wars with Soviets at the hands of extremists. The main dress of Afghan women is a colorful long gown, with small mirrors and delicate thread work,” Attia Mehraban, a women’s rights activist in Afghanistan said.

Though there is no indication that the women attending the pro-Taliban rally were forced to wear that clothing nor has the Taliban said that this will become an enforced standard yet, apart from mandatory burqas for women in universities, but it’s just a matter of time till they control this aspect of women’s lives. Images of women on billboards and in shops around Kabul were covered up or vandalised within days of the Taliban’s return to the capital.

The Taliban had promised that its new era will be more moderate, but it has refused to guarantee women’s rights will not be stripped back and many have already faced violence. Last month, Taliban spokesperson Zabiullah Mujahid said at a news conference that women should not go to work for their own safety. He added that the Taliban ‘keep changing and are not trained to respect women.’ A senior figure in the Taliban, Waheedullah Hashimi said that Afghan women and men should not be allowed to work together as Sharia law doesn’t allow it. If formally implemented, it would bar women from employment in government offices, banks, media companies, etc.

Taliban has also shut down the former government’s Ministry of Women’s Affairs and replaced it with one which enforces religious doctrine. Although still marginalized, Afghan women have fought for and gained basic rights in the past 20 years, becoming lawmakers, judges, pilots, though mostly limited to large cities. But since returning to power, the Taliban have shown no inclination to honor those rights.

Activist Pashtana Durrani warns people to be wary of the promises made by the Taliban;

“You have to understand that what the Taliban say and what they are putting in practice are two different things, they are looking for legitimacy from all these different countries, to be accepted as the legitimate government of Afghanistan, but then at the same time, what are they doing in practice?” Ms. Durrani also points out that when the Taliban talk about women’s rights, they talk about them in vague terms: do they mean mobility rights, socialising rights, political rights, their representative rights, and/or voting rights? It is not clear whether they mean all or only some of those rights, she says.

Grey clouds cover the Afghanistan sky, the darkness and gloominess represent the country’s future under Taliban rule. Many are worried that their hopes and dreams will be shattered by the Taliban, many have been stripped off their basic rights to freedom & education, the most affected remain the women. They have been banned from working in many major sectors by the Taliban, they cannot be a member of the cabinet and uncertainty hovers over their future and their right to livelihood. There is a state of anxiousness and Afghan women and girls must wait to see what pans out in the course of time.