The Chinese Army Could Send Hundreds Of Helicopters Across The Taiwan Strait. It’d Be Costly. 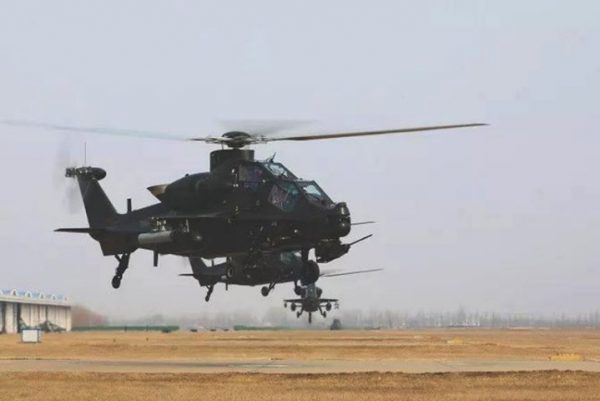 The Chinese army has been buying a lot of new helicopters. As in, hundreds of them in just a few years.

The crash acquisition raises a chilling prospect—that the People’s Liberation Army could load up most of the roughly 400 assault helicopters in its inventory with a couple squads of infantry apiece and send them back and forth across the 100-mile-wide Taiwan Strait as part of a broader attempt to seize the island country by force.

The PLA’s 500 attack and scout helicopters could escort the assault force.

But it could be a bloodbath for Chinese aviators and their passengers, Tom Fox, a U.S. Army aviator, concluded in a new study for the U.S. Naval War College. “Planners would have to assume some attrition of helicopters in each sortie,” Fox wrote.

Just because an air assault across the Strait might be costly doesn’t mean the PLA won’t try it. It’s not for no reason that Beijing has poured billions of dollars into rotary-wing programs over the past decade.

That’s a lot fewer helicopters than the U.S. Army possesses. A third as many, in fact. But it’s not an insignificant force—and it’s big enough, in theory, to lift tens of thousands of soldiers in successive waves over a 24-hour period.“This is a highly complex scenario requiring significant joint integration, originating from the highest levels of command and control, but necessary all the way down to the tactical level of unit coordination, deconfliction and synchronization,” Fox explained.

Flying hundreds of helicopters to 10 or so closely spaced brigade landing zones, all at the same time, is difficult and risky even when no one is shooting at you. “Each brigade-level air assault demands its own unique entry and exit routes,” Fox wrote, “and prudence dictates planning at least an alternate route, if not a second alternate as well, depending on resistance encountered at the shoreline or elsewhere.”

Add in Taiwanese air-defenses and the transit could get really messy, really fast. “Taiwan has a significant advantage here as it prepares defenses for an anticipated PLA air assault,” Fox explained. “Terrain restricts the suitability of landing areas while also dictating preferred air corridors, so there is ample time to plan defenses of key terrain and increase the degree of difficulty for PLA helicopters.”

To compensate for the defender’s natural advantage, PLA air-assault planners could simply assume the first wave of helicopters would be lost, Fox explained. In this scenario, the PLA could send in the older Mi-17s first.

They’d be sponges, soaking up Taiwanese surface-to-air missiles and gunfire and clearing paths for reinforcements. A “significant benefit of this approach is the diminished risk for the second wave of helicopters, so the PLA could expect higher survivability for those aircraft and preserve that combat power for the transition to stability operations,” Fox wrote.

It’s one thing to plan a suicide attack, of course. It’s another to motivate your troops to actually fly into a wall of steel. “While the ideological fervor of PLA forces may be robust especially with regard to the sacrosanct mission of ‘national reunification,’ PLA leaders would probably have to oversell the expected survivability of these forces to the participants themselves,” Fox mused.