The Pakistan Army’s Game of Crores 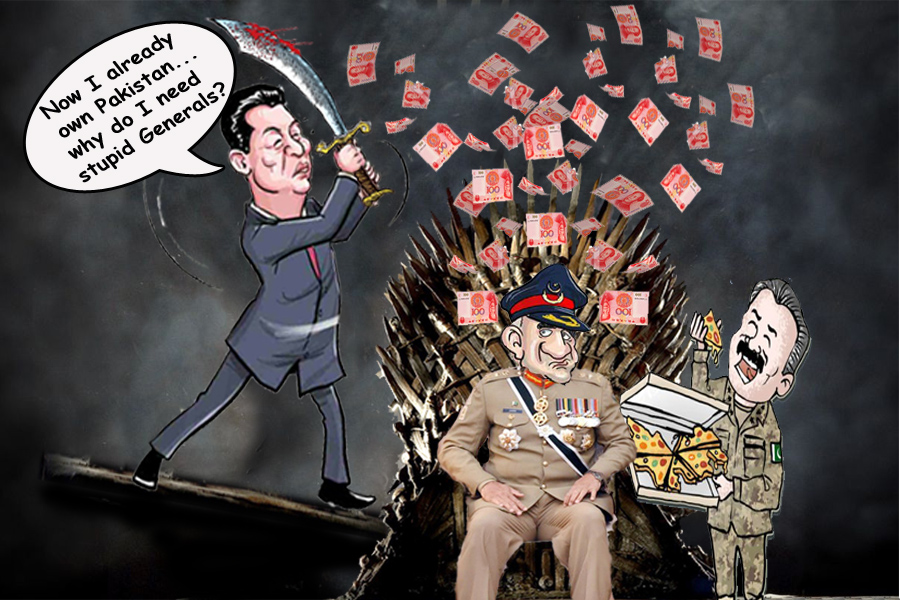 While Pakistan was waging an economic survival battle, Lieutenant General Asim Saleem Bajwa was waging another battle, on how to convert billions to trillions, his own corrupt billions.

This other Bajwa is the chairman of China Pakistan economic corridor (CPEC), and was also special advisor to Imran Khan, stealing Pakistani awam’s money, right under the latter’s foolish nose.

Musharraf, during his time, at the helm of Pakistan and later as president of Pakistan had amassed immense wealth, assets, and attributes all across the world.

General Kayani, the darling boy of the US diplomats and Generals, keeping in tune with the true traditions of Pakistani General Emirs, took a different approach than Musharraf. He amassed his rightful booty, using his brother, and if news is to be believed, he has got immense wealth, in name of his kins.

It was surprising, how in during his time, he was successfully able to delineate civilian from the military.

But it was Raheel Sharif, who got back the military into all of the civilian affairs, while turning the political setup as incompetent. He was right, after all the political class is from the incompetent Pakistani lands (pun unintended), whereas they are sourcing the divine Pakistani Generals from Mars. Hence the differential in competency is obvious to the sensibles.

A String of Cover-Ups

Raheel Sharif sacking drama, wherein 11 top generals were sacked over corruption charges, made the very right noises in civilian circles. However, the point overlooked was the fact that it was not a case of punishing the own, but ensuring that later on the same top army generals are not arrested/subjected to judicial scrutiny. Thence it had Cover-Up written all over it.

In fact, the humongous saga of corruption was deliberately an effort to shield a rip off from public eye, by simply adjusting the scapegoats to various business conglomerate, as a reward for saving the face of Pakistan army’s corrupt DNA.

Had a proper judicial enquiry taken place that time, Asim Bajwa’s corruption could have been arrested much sooner.

The army officers dismissed, were more than happy, as they were conveniently installed at right places in the CPEC business conglomerates, which everybody knows as the personal ownership of the Pakistan army.

It suited them, after all isn’t it difficult, to be an army rank holder as well as a businessman, rather it is much more fun to be a simple Pakistani awam’s blood sucking businessman.https://platform.twitter.com/embed/index.html?creatorScreenName=viewdotpoint&dnt=true&embedId=twitter-widget-0&frame=false&hideCard=false&hideThread=false&id=1299049388413775874&lang=en&origin=https%3A%2F%2Fwww.viewpoint.net.in%2F2020%2F09%2F03%2Fa-game-of-crores-the-pakistan-army%2F&siteScreenName=viewdotpoint&theme=light&widgetsVersion=219d021%3A1598982042171&width=550px

Such luxury, was then being looked at with a hint of jealousy by other Pakistani army generals. It was morally satisfying also, since the pledge to serve the country and the tradition to loot the country, can be contradictory of sorts, and for once, takes Pakistani Army General’s conscience on an avoidable guilt trip.

While all this drama was unfolding, and continues to unravel, as if it’s a never-ending, equally appalling and baffling series of the Game of Thrones-Crores, a book by Pakistani author doctor Ayesha Siddiqa take life like proportions.

Released in 2008, the Brave woman risked her life, exposing Pakistan army as a business enterprise, at that time with the worth of upside of USD 10 billion.

She had spoken of retired and serving army officers running industrial conglomerates, like Tatas and Ambani’s and Adanis, that manufacture almost everything from cement, real estate to food items, and entertainment industry.

Hence, Pakistan army very smartly murdered the economic structure of Pakistan, and later on hijacked it, to make it as their own. The business landlords in Punjab area had their sons enrolled in Pakistan army to take control of Pakistan economy and destiny, using the mask of Pakistan Army.

After installing the puppet Imran Khan, they have affectively destroyed the political landscape in Pakistan. Embroiling the public in radical Islam and keeping the Mullahs and terrorist organizations like LeT, Tehreek-e-Taliban entertained (by giving them a free run) and power in the country, the Pakistan army has since last three years been making merry with the truck loads of Chinese money coming in for CPEC.

But Chinese money has Pakistan’s assets and soul all purchased. That is the sad part.

While Bajwa’s kin have been exposed, for taking up civil posts like PIA(its head Air Marshal Arshad Malik is related to  brother-in-law of Bajwa) as well as Asim Bajwa’s immense wealth gathering, at the cost of Pakistani public money, expert say, this is just the visible tip of the iceberg.

If one was to dig deeper into the Pakistan army managed business and industrial corruption, in all likelihood Pakistan will find itself a hollow economy, already sold itself to the Chinese.

Corrective measures, if at all, are to be instituted now, farthest away from the reach of Pakistan army. Else very soon, Pakistan will not be dealing anymore with its corrupt generals (who already will be conveniently settled abroad with their corruption money), but the communist party of China (CPC), as Chinese slaves.