The Pakistani Angle on the Taliban Victory 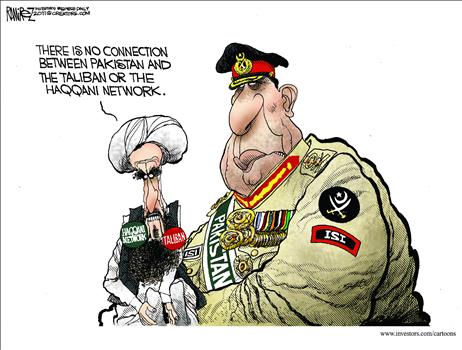 The collapse of the Kabul government and the Taliban’s rapid takeover of nearly all of Afghanistan has captured the attention of the world. It has led to widespread discussion of US imperial retreat, the implications for the global contest between the US and China, and the possibilities of a revival of global Sunni Islamist terror.

An element that has been largely missing in Western analysis of these dramatic events is the role of powerful elements within Pakistan in facilitating the activities of the Taliban in recent years. Yet without this complex and multi-faceted Pakistani role, it is difficult to see how the Afghan jihadi movement could have sustained itself during the years of US occupation, and laid the foundations for the rapid takeover of power that we have just witnessed.

Pakistani Prime Minister Imran Khan praised the Taliban victory in a statement earlier this week as “breaking the shackles of slavery.”

The US and its allies have consistently chosen to turn a blind eye to evidence of the Taliban presence in Pakistan, and Islamabad’s apparent assistance to the movement.

This decision relates to the US and its allies’ dependence on Pakistan as a vital logistics hub in its deployment in Afghanistan. Pakistani intelligence support was important in deciphering the dynamics of militant Islamic movements in this area.

More broadly, a reluctance to antagonize Pakistan, a nuclear power with a population of 200 million, traditionally aligned with the US, probably played a role in this attitude of benevolent neglect. US reluctance to place pressure on Pakistan, paradoxically, may have been exacerbated by widespread anti-American sentiment in Pakistan at the popular level, and an American desire not to worsen it.

This resulted in a situation in which Pakistan came to constitute both a vital node in the prosecution of the US campaign against the Taliban, and a central element in the Taliban’s war effort against the US, with the apparent acquiescence of Washington.

The Taliban leadership is domiciled in the city of Quetta, in Pakistani Balochistan. The movement’s fighters, alongside members of other Sunni jihadi groups including al-Qaeda and the Haqqani network, maintain havens in the Federally Administered Tribal Areas (FATA) along the border, crossing back and forth to Afghanistan at will, with no interference from the Pakistani armed forces. These areas were the springboard for the recent campaign that culminated in Kabul. Taliban fighters wounded in the recent campaign were treated in Pakistani hospitals, according to a June 27 statement by Sheikh Rashed Ahmed, Pakistan’s interior minister, to the Pakistani Geo news website.

In addition to the logistical role, these majority Pashtun border areas are home to thousands of madrassas, Islamic religious seminaries, in which the hard-line Deobandi interpretation of Sunni Islam favored by the Taliban is propagated. In this way, the pool of future fighters for the Afghan Taliban is maintained, on Pakistani soil.

A resident of Kuchlak, 25km from Quetta, noted in an interview with Voice of America this week that the Taliban maintains considerable support among the residents of the area, and that “Locals from all the tribes (living in the town) are with them, saying that they are conducting jihad to establish the Islamic Emirate of Afghanistan.”

Afghanistan’s deposed vice president Amrullah Saleh, along with other members of the deposed Ghani government, have alleged that the Pakistani Inter-Services Intelligence (ISI) and the Pakistani Special Forces were directly guiding the Afghan Taliban.

Such allegations are routinely denied by the Pakistani authorities and are impossible to prove conclusively. But the weight of evidence regarding the presence of the Taliban in the border areas, their ease of access, the provision of available health care, and statements of support by senior officials seem to confirm a role of elements within the Pakistani state in the recent Taliban victory.

What are the motivations behind the Pakistani role?

It is important to note that the border between these two states is of relatively recent vintage and does not represent a division of populations according to linguistic or cultural heritage. Rather, Afghanistan was divided off from then British India in the Anglo-Afghan Treaty of 1919, in which Britain recognized the independence of Afghanistan. The 1893 ‘Durand Line’ that this treaty ratified (in a slightly modified form) was a line demarcating areas of influence between the British and the Afghan Amir of that time.

The result when the modern states of Pakistan and Afghanistan emerged was that the border between them bisected the area of the majority population of the largely tribal Pashtun peoples. The Taliban are a mainly Pashtun movement. Pashtuns constitute around 42% of Afghan citizens. The majority of Pashtuns, however, live in Pakistan, where they are a subordinated minority in a state dominated by the Punjabi Muslim population.

Close Pakistani involvement in Afghan affairs has been a constant element in the modern history of this area. The Pakistani desire for ‘strategic depth’ in Afghanistan has in recent years been reflected in support for domiciling of or turning a blind eye to, a variety of Islamist movements in the Federally Administered Tribal Areas (FATA) and the neighboring Khyber Pakhtunkhwa province of Pakistan. In addition to the Taliban, these have included the Haqqani Network and elements of al-Qaeda.

Pakistan desires this strategic depth in order to counteract Indian influence in this strategically important area in the ongoing contest between the two countries. Influence over or control of the government in Kabul would also enable Pakistan to project influence further into Central Asia. Lastly, given the demographic issues within Pakistan, the alliance with the Taliban, who favor an ‘Islamic Emirate,’ enables Islamabad to offset and combat separatist or nationalist tendencies among its own Pashtun population. Since 2014, a popular movement for Pashtun rights, known as Tahafuz, has been active in this area.

These developments matter to Israel because Pakistan is engaged in a growing strategic relationship with Turkey, based on a shared conservative Sunni Islamist outlook. The emergence of a Pakistan-aligned Taliban government in Kabul will strengthen this axis. Given Islamabad’s close ties with China, and Turkey’s own advancing relations with Beijing, this, in turn, raises the future possibility on the horizon of a trilateral alignment. However, this would depend on the willingness of conservative Islamists in Pakistan, Afghanistan, and Turkey to turn a blind eye to China’s own treatment of its Muslim minorities.

Many analysts, in discussing Pakistan’s role in the latest events in Afghanistan, have noted a 2014 statement by Hamid Gul, a former leader of the ISI in Pakistan: “When history is written, it will be stated that the ISI defeated the Soviet Union in Afghanistan with the help of America…Then there will be another sentence. The ISI, with the help of America, defeated America.”

Gul, incidentally, also believes that the Mossad carried out the 9/11 attacks, that the US actively seeks to destabilize Pakistan because it is a “Muslim nuclear state,” and that the Taliban represent the “purest form of Islam.”

These views are a reflection of the outlook of those elements within the Pakistani system that manage the relationship with the Taliban. Without this relationship, the Taliban victory of recent weeks would almost certainly not have taken place. This piece of the picture regarding Afghanistan is worthy of greater attention in the West.