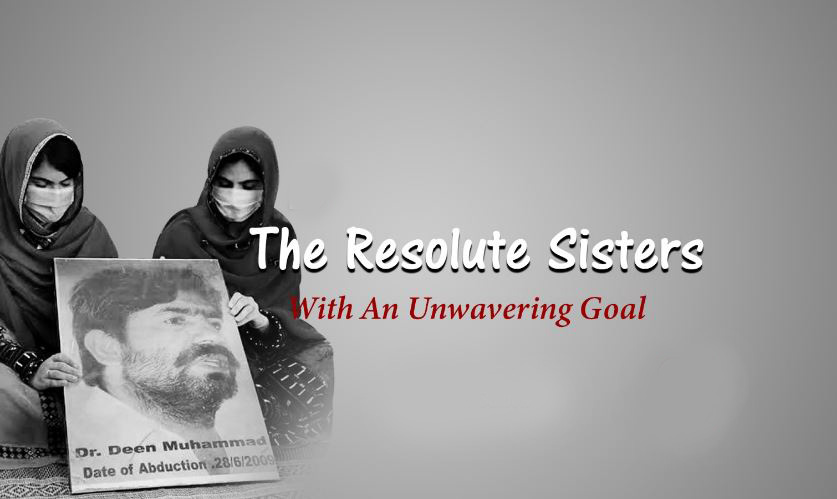 When they first appeared in a protest camp they were both quite young and the little one was probably not even sure why they were protesting. It all began in June 2009, when Dr Deen Mohammad Baloch, was picked up from Ornaach, Khuzdar. He was abducted by Pakistani secret services while he was performing his medical duties.

After Dr Deen Jan’s abduction, the lives of his children have changed dramatically. Due to Dr Deen Jan’s work commitments, Sammi and Mehlab were used the waiting for their father but knowing about his whereabouts and being confirmed of his good health. They were also confident that he was going to see them on his vacation.

June 2009 has changed many realities in Sammi and Mehlab’s life. They had to face the harsh reality that their father has been forcibly disappeared and is being held in secret torture cells. They felt helpless for the very first time after facing the harsh reality, because their source of courage and help was not around to guide and show them the path to walk on.

They felt shattered when they understood that their father’s idea of demanding his just right for freedom and equality is a crime in a country where everyone talks about the freedom and equality for Kashmir and Palestine. They had to bear the painful fact that Baloch political parties, leaders and activists were always considered as anti state and traitors because they denied the history taught in Pakistan studies and instead relied upon the factual historical events.

Sammi and Mehlab were shocked, scared, frightened and they had eyes full of tears. They had to leave their house and break the traditions of society where women were supposed to live in the boundaries of the house. Sammi and Mehlab then began a quest to find their missing father. They knew it would be a hard and long struggle. They were aware of the sufferings that followed their every step. Sammi and Mehlab since 2009 have been seen in Karachi, Quetta and Islamabad to demand immediate release of their missing father.

In 2013, a historical march from Quetta to Islamabad was carried out under the supervision of Mama Qadeer Baloch, Dr Deen Mohd Baloch’s daughter Sammi was also walking along with other families of Baloch missing persons. Blistered feet, tiredness, body aches and threats from the secret services could not stop the protesters from reaching Islamabad and demand for the safe release of their missing loved ones.

Historical long march of VBMP, ended in Islamabad and families of the Baloch missing persons arrived but without any hopes from Islamabad. Sammi never lost hope and she continued her protest against her father’s abduction and for his safe release.

In 2020, Islamabad once again witnessed families of abducted Baloch with their poster and banners, this time they began a sit-in on D-Chowk Islamabad. This time Sammi was strong, instead of shedding tears she was soothing other protesters and calming them down. Her way of talking had gradually changed this time, she was speaking calmly and confidently without any hesitations.

Sammi and Mehlab Deen, once only known as daughters of Dr Deen Mohammad have now become the daughters of thousands of mothers and fathers whose loved ones are missing because of their tireless struggle for Baloch missing persons.

Today completes twelve years of Dr Deen Mohammad’s abduction. Twelve years of pain, sorrows, agonies and memories that Sammi and Mehlab have carried but they continue to struggle without stopping a single day.

One can show sympathy and solidarity with the family of Baloch missing persons, but no one can understand, feel or imagine the hardships the families of the victims of the enforced disappearances are going through on a daily basis. Let us all honestly play our due part in the struggle for the release of Dr Deen Mohammad and all other forcibly disappeared people.