The sin of being minority in Pakistan 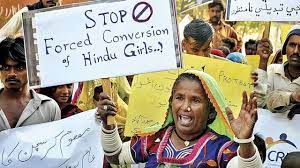 If anybody had a hope that the curse was over with partition, they couldn’t have been more wrong. The shadow of partition continues to haunt us seven decades after the event.

The lead up to the separation was marked by gruesome violence, arson and religious riots on the streets. Uprooting from places of birth by choice or by force, large scale displacements and separation from one’s kith and kin left a trail of human tragedy unprecedented anywhere in the world.

A slice of land came into being at our western boarder by the name Islamic republic of Pakistan. Since then, two all-out wars have been fought and scores of boarder skirmishes have broken out between the two neighbours. Pakistan isn’t at peace with itself and its malevolent gaze is cast on Kashmir. It claims to have a right to wrest the land away from us, because of demographic nature of the place. Muslim majority land is rightfully theirs to appropriate to their country. They would like us to forget that Kashmir Pandits used to be a major part of the population, whom they systematically eliminated and drove out of that place.

Minorities on their side found themselves ringed with enemies from all sides. They have been continuing to face religious persecution at the hands of Islamic fundamentalists. Minor girls are taken away from their homes and forced into marriages with old men. Rapes, religious conversion and murders of minority people are rampart. Temples, Guru dwars and churches are desecrated every other day. Mosques come up on the ruins of places of worship of minority communities. Government and judiciary look the other way while hapless minorities go through unspeakable miseries meted out to them on a daily basis. As if all these are not enough, they are subjected to unimaginable horrors of blasphemy law. The trials are conducted at whims and fancies of Mullahs, often leading to lifetime incarceration of victims or punishment with death or, worst still, brutal murder at the hands of religious fanatics.

It’s to save these hapless minorities that our government has enacted CAA . Islamists were up in arms against the law. They set the streets aflame with violence and riots.

Being the only Hindu country, India has a sacred duty to protect minorities from all Islamic countries in the neighbourhood.

In this context, my book Falconers’ paradise deals with the topic of minorities in Pakistan. It is a spy story involving a mission of eliminating some high value terrorists. It touches upon the piteous condition of minorities and how the Indian spies help them out in various ways. please do read it and give your reviews.