The World Must Condemn China’s Genocide of Uyghurs 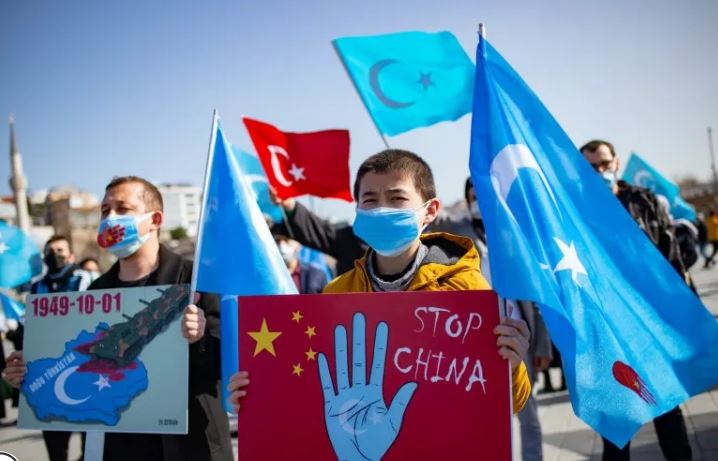 Enes Kanter, a center for the Boston Celtics, has recently drawn attention after using his social media platforms to speak out against the Chinese Communist Party (CCP) for its numerous human rights abuses. In a video posted to Twitter, he spoke of “torture, rape, forced abortions and sterilizations” and other atrocities being carried out against almost 2 million members of China’s Uyghur population.

“The Uyghur region has become an open-air prison and surveillance state where freedoms are nonexistent for the Uyghur people,” Kanter said.

These comments came just days after China banned Celtics games from being aired as a response to Kanter’s criticism of Chinese President Xi Jinping and calls for Tibet to be free.
Kanter, who has emerged as a leading voice against human rights abuses, has now also denounced Nike for its refusal to acknowledge the brutality taking place in China, particularly in the factories where the company’s shoes are manufactured using the forced labor of Uyghurs.

China’s abuse of Uyghurs is longstanding and calls to mind some of the darkest chapters in human history.

The grim reality is that China contains an estimated 260 concentration camps, dedicated to imprisoning, torturing, and killing Uyghur Muslims at the behest of the CCP—often without formal charges ever being filed. China’s treatment of its Muslim population is one of the most glaring human rights abuses the world has seen.
Though the CCP denies the existence of its concentration camps (which it occasionally terms “re-educational centers”), there is overwhelming evidence of their existence, including satellite images and testimony from those who have escaped.

An investigation by the BBC showed satellite images, dated April 2018, of a concentration camp in Dabancheng district in Northwest China. Satellite images of the same site from earlier this year show at least 12 new structures have been built, suggesting the CCP has grown its terror operation and rounded up even greater numbers of prisoners.

In these and other disturbing images, reminiscent of holocaust trains used by German Nazis to transport Jews to death camps, Uyghurs can be seen blindfolded with their hands bound, being loaded onto trains to transport them to one of China’s concentration camps. A former Chinese police officer who defected in opposition to the CCP said that up to 500 detainees at a time would be shuttled to the concentration camps, after the prisoners were handcuffed and had hoods put over their heads.

The CCP has targeted Muslims with bans on long beards, headscarves, Islamic-sounding names, and religious education for children. Chinese Muslims are also subjected to travel restrictions and profiling at thousands of vehicle checkpoints. Uyghurs are often stopped, while Han Chinese residents are allowed to pass through.

Technology has also been deployed to track the minority ethnic group. Uyghurs are required to carry a smartphone wherever they travel. Leaked cables between Chinese officials show that police randomly seize individuals’ phones and examine them by hand or by plugging them into a scanner. If religious content or even religious words or phrases are found on an Uyghur’s phone, that person can be detained.

Though Kanter is perhaps the most visible individual speaking out against the atrocities in China, he is not alone. Earlier this year, The Global Legal Action Network, along with the World Uyghur Congress and Uyghur Human Rights Project, obtained a legal opinion concluding that “acts carried out by the Chinese government against the Uyghur people in [the Xinjiang Uyghur Autonomous Region] amount to crimes against humanity and the crime of genocide.”

In late October, a group of 43 countries denounced China’s human rights abuses concerning its treatment of Uyghurs. It’s time for the rest of the global community to join them in condemnation, and for a pressure campaign to end the CCP’s reign of terror against the Uyghur people.