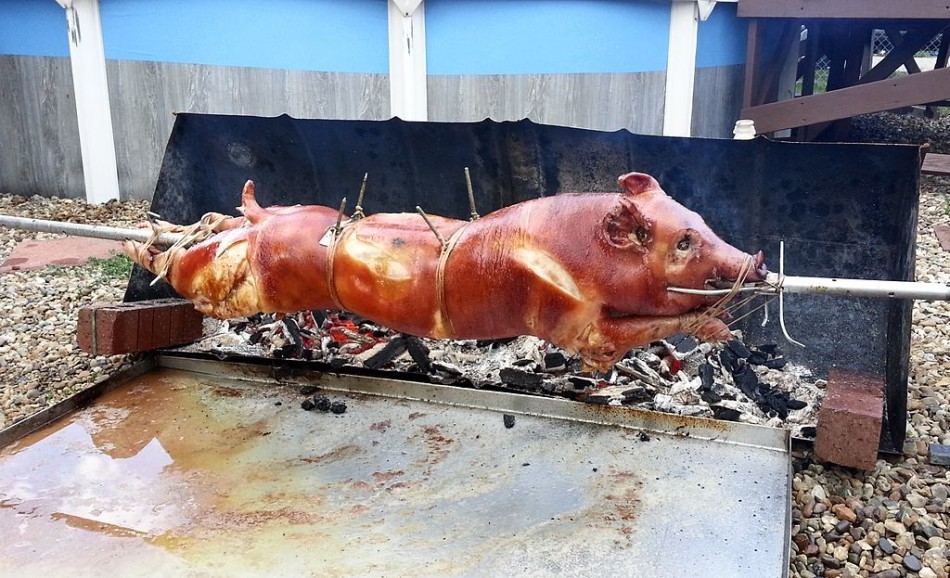 Former detainees claim that the forcible feeding of pork is most rampant in re-education camps and detention centres.

It has been more than two years since Sayragul Sautbay was released from a re-education camp in China’s westernmost region of Xinjiang. Yet the mother of two still suffers from nightmares and flashbacks from the “humiliation and violence” she endured while she was detained.

Sautbay, a medical doctor and educator who now lives in Sweden, recently published a book in which she detailed her ordeal, including witnessing beatings, alleged sexual abuse and forced sterilisation.

In a recent interview with Al Jazeera, she shed more light on other indignities to which the Uighurs and other Muslim minorities were subjected, including the consumption of pork, a meat that is strictly prohibited in Islam.

“Every Friday, we were forced to eat pork meat,” Sautbay said. “They have intentionally chosen a day that is holy for the Muslims. And if you reject it, you would get a harsh punishment.”

She added that the policy was designed to inflict shame and guilt on the Muslim detainees and that it was “difficult to explain in words” the emotions she had every time she ate the meat.

“I was feeling like I was a different person. All around me got dark. It was really difficult to accept,” she said.

Testimonies from Sautbay and others provide an indication of how China has sought to crack down in Xinjiang by taking aim at the cultural and religious beliefs of the mostly Muslim ethnic minority, implementing widespread surveillance and – from about 2017 – opening a network of camps it has justified as necessary to counter “extremism”.

But documents made available to Al Jazeera show that agricultural development has also become part of what German anthropologist and Uighur scholar, Adrian Zenz, says is a policy of “secularisation”.

According to Zenz, the documents and state-approved news articles support talk within Uighur communities that there is an “active” effort to promote and expand pig farming in the region.

In November 2019, Xinjiang’s top administrator, Shohrat Zakir, that the autonomous region would be turned into a “pig-raising hub”; a move that Uighurs say is an affront to their way of life.

One news article published in May that Zenz recorded describes a new farm in the southern Kashgar area, which aims to produce 40,000 pigs every year.

The project is expected to occupy a 25,000-square-metre (82-square-foot) area in an industrial park in Kashgar’s Konaxahar county, renamed Shufu, according to the Chinese-language website, Sina.

The deal was formally signed on April 23 this year, the first day of Ramadan, the Muslim fasting month and states that the pig farming is not meant for export purposes, but instead “to ensure the supply of pork” in Kashgar.

The Uighurs make up 90 percent of the population in the city and the surrounding area.

“This is part of the attempt to completely eradicate the culture and religion of the people in Xinjiang,” Zenz told Al Jazeera.

“It is part of the strategy of secularisation, of turning the Uighurs secular and indoctrinating them to follow the communist party and become agnostic or atheist,” he added.

Beijing has defended its policies in the region, saying the approach is needed to fight the “three evils of extremism, separatism and terrorism”, following deadly riots in the regional capital Urumqi in 2009.

It has denied the existence of the re-education camps in which the United Nations has said more than one million people have been held, instead saying it operates vocational centres that allow it to “retrain” the Uighur population and teach them new skills.

Like Sautbay, Uighur businesswoman Zumret Dawut has first-hand experience of detention. She was picked up in March 2018 in Urumqi, the city where she was born.

For two months, Dawut said authorities demanded explanations about her links to Pakistan, her husband’s homeland. They questioned her as well about how many children she had, and whether or not they had studied religion and read the Quran.

She says she was humiliated repeatedly and on one occasion was slapped in the face with a rolled paper after displeasing her interrogator.

Another time, she had to beg the camp’s male officers to allow her to go to the restroom, only for them to leave her handcuffed and watch her the whole time she was in the toilet.

She too says she was served pork repeatedly.

“When you sit in a concentration camp, you do not decide whether to eat, or not to eat. To be alive, we had to eat the meat served to us,” she told Al Jazeera through an interpreter.

Yet those experiences could not have prepared her for what would happen next.

She and several other female detainees were sterilised to prevent them from having more children. The controversy was reported earlier this year by the Associated Press news agency, drawing widespread condemnation.

Sautbay, who was from the town of Ili, ended up in another camp after authorities learned that her husband and their two children had left for neighbouring Kazakhstan in early 2016.

She had originally planned to join them but by then authorities had confiscated her passport and that of other civil servants.

Because of her medical background and experience in running preschools, Sautbay was assigned to teach her fellow detainees the Chinese language, allowing her to closely observe what was happening to the Uighurs.

She says the practice of making Muslims eat pork went beyond the detention camps.

In one school in Altay, a city in northern Xinjiang, students were also forced to eat the meat and when many refused and demonstrated against their school administrators, the government sent in soldiers to intervene, Sautbay said.

The Xinjiang government also started an initiative called “free food” for Muslim children in kindergarten, serving them pork dishes without their knowledge, she added.

The idea was that by starting them young, the Muslim children would acquire a taste for non-halal food.

“China is using and will use different tactics to force Uighurs and other Muslim population to eat pork,” Sautbay said.

Last year, the Italy-based AsiaNews alleged that during the Chinese Lunar New Year, which happened to be the “Year of the Pig”, government officials reportedly delivered pork directly to Muslim households in Ili, and insisted that Uighurs decorate their homes for the festive season.

Arslan Hidayat, a Turkey-based Uighur rights activist and secretary-general of the Uyghur Revival Association, told Al Jazeera that whether it is breeding pigs, or eating pork and drinking alcohol, the Chinese government is attempting to “normalise” prohibited practices for Muslims in Xinjiang.

In 2018, as part of official state policy, the Xinjiang government also announced that all halal restaurants in the region would be required to “operate normally” during Ramadan, in contrast to previous years when those same establishments were closed during the month-long ritual of fasting.

According to the Xinjiang government website, which published the memorandum containing the provision on Muslim food establishments, the directive was meant to ensure “normal life order during Ramadan.”

But Zenz believes the directive meant the government wanted to make sure “Uighurs eat and don’t fast” during the day.

He also shared two other official documents, written in the Chinese language, which showed the government in Kashgar allotting money for food for their mostly Muslim Uighur staff during Ramadan.

Taken together, this constitutes a pattern of the Chinese government carrying out a “war against halal”, Zenz noted referring to the term used in Islam to describe acceptable food and other daily practices.

In 2018, the Reuters news agency also reported on an “anti-halal campaign” in Urumqi “to stop Islam penetrating secular life and fuelling ‘extremism’”.

Speaking to Al Jazeera about China’s overall policy towards Uighurs, Einar Tangen, a China affairs expert based in Beijing, said that the Chinese government “feels strongly” that many of Xinjiang’s residents have been “radicalised” in recent years.

In Beijing’s view, the only way to address the situation in Xinjiang is to give residents “the education that they should have gotten when they were younger.” Thus the “training camps”.

“This is what they [government] say, and they are moving people through this education camps. They teach them skills, language, history, and that’s their way of dealing with it.”

But the activist Hidayat notes that even non-observant Uighurs, many of them government employees who had tried to adopt a lifestyle similar to the Han Chinese, had not escaped punishment. They too were sent to the camps, by virtue of their racial identity alone, he said.

Tangen, however, pointed out that the economic situation in Xinjiang had “improved dramatically over the years” and people there were better off.

“So there is always this tension between what the West says is your human rights, to speak freely, do what you want, and the idea that without economic opportunity and food on the table, rights don’t mean a lot.”

With regards to the specific allegations of forcing Muslims to eat pork, Tangen said that he did not know whether the information was “factual”, but if it was taking place it was not the result of “central government policy.”

The documents seen by Al Jazeera are among a cache that also detailed the alleged sterilisation programme reported by AP.

“I am sure that there are things that are happening that should not be happening. But unless I have some of the facts, it is impossible” to determine the veracity of the allegations, Tangen said.

In a huge bureaucracy like that of China, there may be “some people” who might commit abuses, he said.

“The key is to find these people and punish them.”

The Chinese government has had little to say about the issue, although various state-controlled publications questioned the credibility of both Sautbay and Dawut when they made allegations of other abuses in Xinjiang.

Beijing has also accused Zenz, the German anthropologist, of “fabricating facts and falsifying data” and pointed to his links to “right-wing” factions of the US government. China observers also raised questions about his “sudden expertise” on Xinjiang and the Uighurs.

Al Jazeera has sought an official response from China’s foreign ministry but has yet to receive a reply. It has also requested comment from the Institute for Human Rights at China University of Political Science and Law, but it had yet to respond at the time of publication.

Dawut, the Uighur businesswoman now living in exile in the US, says she stands by her story of what happened to her inside the camps.

Meanwhile, Sautbay, the Kazakh medical doctor, said that by sharing her ordeal, she hoped to be a voice for those who remain in captivity.

“The days I have spent in the concentration camp will not be erased from my memory, and I have to live with it my entire life,” she said.