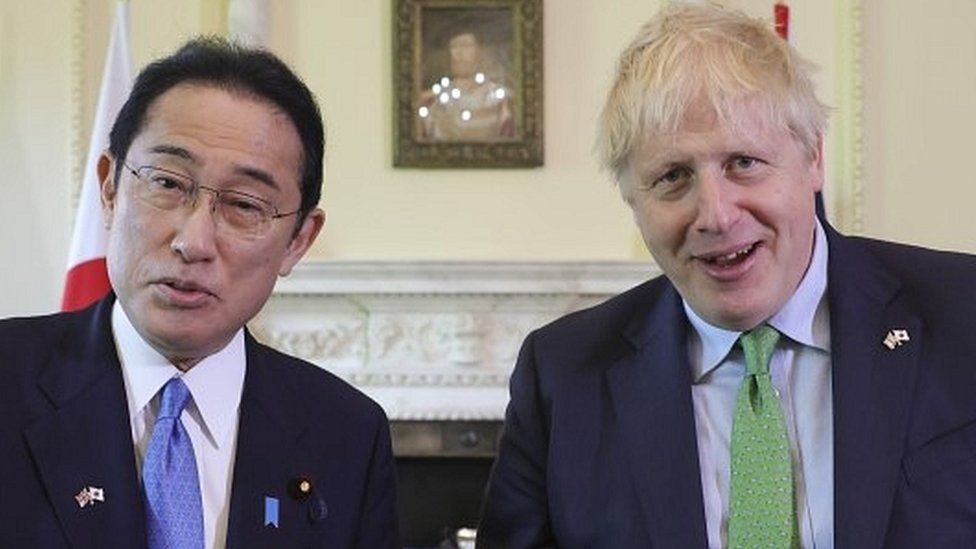 Boris Johnson has promised to work with other countries to take on “autocratic, coercive powers”, after signing a defensive partnership with Japan.

The agreement is the first of its kind between Japan and a European country.

It comes after both PMs condemned Russia’s invasion of Ukraine.

Mr Johnson said: “We in the UK recognise that our security in Europe is indivisible from the security, our collective security, in the Asia-Pacific, in the Indo-Pacific region.

“And there is direct read across from the actions of autocratic, coercive powers in Europe, to what may happen in east Asia. And that’s why we want to work more closely together.”

Japan, a member of the G7 group of leading economies, is part of the Western alliance defending Ukraine and has condemned the invasion, imposed sanctions on Russia and sent non-lethal military aid to Kyiv.

A Downing Street spokesperson said: “Both leaders agreed that Russia’s barbaric invasion marked the end of the post-Cold War period and had major implications for wider international stability.”

Addressing UK business leaders at London’s Guildhall ahead of his meeting with Mr Johnson, Mr Kishida said Japan would utilise nuclear reactors to reduce its dependence on Russian energy.

During the meeting the two leaders ate popcorn from Fukushima, to mark the lifting of restrictions on food products from the Japanese region after the 2011 nuclear disaster.

A flypast took place to mark the visit of Mr Kishida – his first to the UK since becoming prime minister last October – and included two Typhoon fighter jets and the RAF Voyager Vespina.