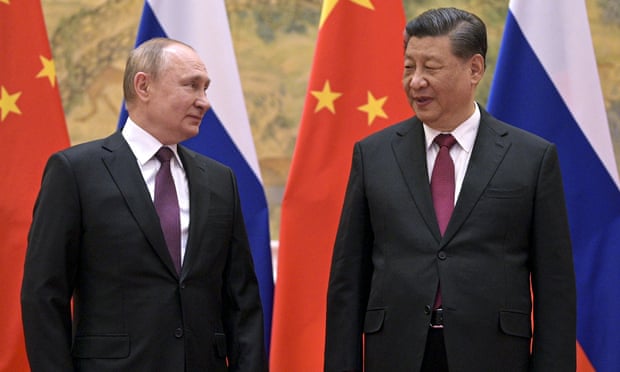 The unfolding crisis in Ukraine poses a diplomatic dilemma for China but also offers an opportunity for Beijing as Joe Biden’s administration is likely to continue to be distracted by Russia ahead of the US mid-term elections later this year.

China’s position in this round of Russia v the west is under particularly heavy scrutiny following Xi Jinping’s pledge with his Russian counterpart, Vladimir Putin, on 4 February that there would be “no ‘forbidden’ areas of cooperation” in their bilateral relationship.

In the last few days, as the crisis in Ukraine dominated international headlines, Chinese analysts have debated the country’s policy choice. While hardliners advocate a pro-Russia foreign policy, others think Beijing should seize on this crisis to protect ties with Washington.

“China ultimately wants good relations with the US,” said Wang Huiyao, president of the Centre for China and Globalisation, a Beijing-based thinktank, who also advises the government.

“It is true that Beijing and Moscow have pledged closer cooperation, because both countries have similar concerns over external involvement in their own security issues,” Wang said, adding that China sees some parallels in Nato’s eastward expansion with its own concerns relating to the South China Sea. Washington and its allies, however, do not support Beijing’s claims to much of the South China Sea.

Yu also pointed out that some strategists in Beijing now view this situation favourably because the Biden administration is being distracted, and as a result is likely to have less energy and resources to counter China’s growing influence in the Indo-Pacific – at least prior to US mid-term elections in November this year.

So far, China’s position on Russia’s move on Ukraine has been clear: Beijing does not endorse Moscow’s aggression. China’s top diplomat, Wang Yi, attempted to clarify this stance over the weekend. “The sovereignty, independence and territorial integrity of any country should be respected and safeguarded,” Wang told the Munich Security Conference. “Ukraine is no exception.”Advertisementhttps://761dfb7d540a2069f13d2a505b768f80.safeframe.googlesyndication.com/safeframe/1-0-38/html/container.html

On the surface, Beijing’s response fits the diplomatic doctrines it has long advocated internationally. In a major speech to mark the 60th anniversary of the initiation of the Five Principles of Peaceful Coexistence on 28 June, 2014, Xi reiterated “mutual non-aggression, non-interference in each other’s internal affairs”.

Yet, analysts highlight Wang’s insistence on respecting “the legitimate security concerns of all countries”, as he told Antony Blinken, the US secretary of state, earlier on Tuesday. They say it is a clear indication of Beijing’s sympathy towards Moscow’s view on Nato’s eastward influence.

Critics also point to China’s position on Russia in 2014, when Moscow annexed Crimea. A few months before Xi’s June speech that year, China abstained in a UN general assembly vote on a resolution that discouraged Russia’s action.

From China’s perspective, the crisis in Ukraine is not as clear-cut. While Xi and Putin exhibit a brotherly relationship, Beijing also enjoys friendly ties with Kyiv, and Ukraine offers a commercial opportunity for Xi’s ambitious belt-and-road economic initiative. Ukraine’s trade with China in 2020 was at $15.42bn (£11.37bn). China is Ukraine’s top trading partner.

Late on Monday night, China’s embassy in Kyiv told its citizens and companies to refrain from travelling to “areas where the situation remains unstable”. The embassy also advised Ukraine-based Chinese citizens to stock up on daily necessities such as food and drinking water. The embassy cited “significant changes” in the situation in eastern Ukraine for this urgent advisory.

The Weibo entry soon became the top “hot topic” on Weibo, followed by the topic of “Ukraine” on the same list. The hashtag: Ukraine issues statement on Weibo has been viewed over 300m times as of Tuesday. Over 20,000 comments followed, too.

Ryan Hass, a former senior adviser to Barack Obama and senior White House officials, saw an opportunity for Washington to “[sharpen] Beijing’s choices” through this crisis. “This does not mean concessions or a softening approach to PRC [People’s Republic of China],” he wrote on Twitter. “Rather, it requires Beijing seeing a path remaining open for less hostile relations with the west, and significant risks for being linked to Russia’s recklessness.

“The goal would not be to seek to compel Beijing to break from Moscow. That is not happening. It would be to help Beijing reach its own judgment that its interests require it to begin a gradual, steady reorientation in the wake of a Russian invasion of Ukraine.”