Understanding Balochistan: Pakistan’s occupation in the name of Islam, their ‘kill and dump’ policy and Baloch people’s resistance 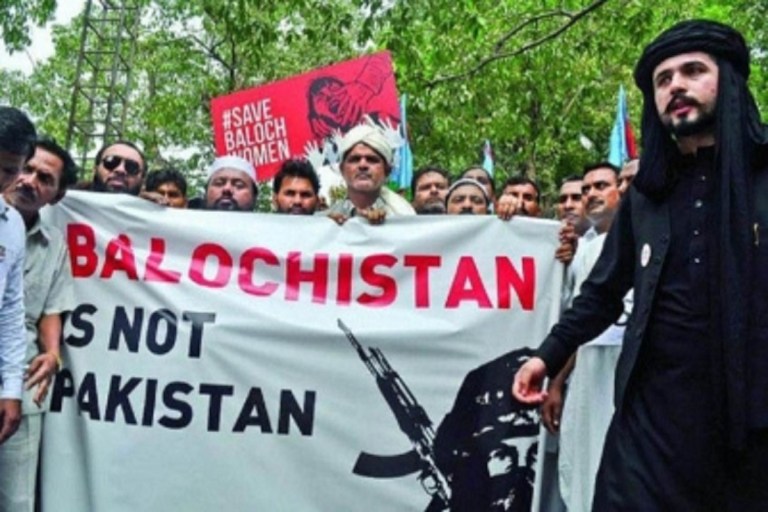 When the British rule in the Indian subcontinent came to an end in August 1947, it disregarded the struggle of the indigenous people in the region. Among them is the struggle of the Baloch nation for the restoration of their lost freedom. On the 11th of August 1947, three days before the partition of India and the conception of Pakistan, the state of Balochistan announced its freedom from British rule. Unfortunately, the freedom of Balochistan did not last for very long. in March 1948 Pakistani forces invaded the Kalat state and annexed Balochistan forcefully. Since then, Balochistan has witnessed five resistance movements.

The Baloch nation has been opposing Pakistani rule in Balochistan since March 27, 1948. From Prince Abdul Karim to Nawab Khair Buksh Marri several veteran Baloch leaders have termed the annexation of Balochistan with Pakistan “a forceful occupation”. On the other hand, Pakistan terms this annexation as a merger of Islamic brotherhood.

Pakistan wanted Balochistan to be merged into its federation. Pakistan’s first Governor-General and Muslim league’s leader Mohammad Ali Jinnah presented this proposal to the Khan of Kalat and offered him to join their federation. The proposal was presented before the parliament. Balochistan’s parliament in 1948 rejected the idea of a merger with Pakistan by an overwhelming majority and voted in favour of remaining a free and sovereign state.

Both houses the House of Commons and Lords denounced and condemn the idea of giving up the freedom of Balochistan in the name of Islam and religion. Mir Ghaus Bux Bizenjo, a member of the house of commons passed his famous comments on the issue of merger. He said, “if Pakistan wants to merge Balochistan with newly created Pakistani state in the name of Islam then they should also merge the state of Afghanistan, Iran and the Gulf states, as they all are Muslim states.”

On March 26, 1948, the Pakistani army and navy marched on the coastal areas of Balochistan including Kech and Panjgur. Meanwhile, Khan Ahmad Yar Khan was in Karachi to raise his voice against this illegal move, where he was forced to sign the Kalat State Accession Treaty with Pakistan. Despite this, the Pakistani army invaded and captured the central city of Kalat state on March 27, 1948, by force.

Over time nationalist forces of Balochistan have fought against what they called (illegal occupation of Balochistan). In 1948 Baloch fought under the banner of Prince Abul Karim Khan the last governor of Makran, in the 1960s Baloch people united and open a front against Pakistani occupation under the leadership of Nawab Norooz Khan Zehri after the 1970s Baloch nation continue to struggle on both political and armed fronts. The political struggle was led by the Political and student organisations and armed struggle was conducted by the tribal forces.

The current struggle for a free Baloch state began at the end of the 1990s, in the leadership of the late Nawab Khair Buksh Marri. This phase of Baloch is more sophisticated from past struggles. Earlier movements against the Pakistani state were crushed within a couple of years of their commence, those struggles lacked a political front and the then leadership mostly focused on tribal regions.

The later struggle from its inception focuses on the political groups and it has broadly influenced every part of Balochistan. Nawab Khair Buksh Marri, the leader of the Baloch freedom struggle along with his friends started a political study circle called Haq-e-Tawar. This study circle involved people from different walks of life. Including teachers, advocates, Drs, engineers, shepherds, businessmen hence everyone was part of this close discussion.

Those men under the supervision of Nawab Marri were debating and discussing guerilla warfare and political movements for national liberation. These discussions were spread in every nook and corner of Balochistan.

At the beginning of 2000, the Baloch Liberation Army waged a war against the Pakistani forces in Balochistan. The war later spread across Balochistan after the murder of prominent Baloch leader Nawab Akbar Khan Bugti in August 2006. Bugti’s murder sparked turmoil, the demand for an independent state has reached its peak.

Baloch Student Organisation Azad (BSO-Azad), Baloch National Movement and Baloch Republican Party became the faces of the political front against the state atrocities, they were advocating for the freedom of Balochistan and campaigning against the human rights violations in Balochistan.

After the Murgaap incident, Pakistani forces escalated the abduction and extrajudicial killings of Baloch political and rights activists. According to the Baloch human rights organisations only in the last two decades, the number of abductions has risen from hundreds to over twenty thousand.

Pakistan army intensified its “Kill and Dump” policy with zero tolerance against Baloch dissent. From 2009 onwards countless political and student activists were extrajudicially murdered, particularly the Central Information Secretary of BNM Haji Razaq Baloch and Secretary-General of BSO-Azad Raza Jahangeer Baloch. Haji Razzaq also worked as a senior journalist in a local newspaper known as Daily Tawar. Not only that, but the Pakistani establishment also took further steps to suppress the voice of the Baloch nation by banning their political parties and organisations. By the end of 2014 political and student activism in Balochistan were made impossible, anyone who dared to speak against the state brutalities was targeted by the Pakistani forces or their supported local death squads.

Pakistani military establishment used brutal force and committed atrocities across Balochistan thinking it might break the spirit of the Baloch nation and demoralize the mass to yield from their demand of freedom, but the Pakistan army failed before the will and commitment of the Baloch nation towards their indigenous struggle.

Pakistan’s every effort to counter the Baloch struggle for a free and sovereign state may be successful in the short term, yet if we analyse the political and armed struggle of Balochistan Pakistan is unable to counter the indigenous struggle of the Baloch nation in long term. Nearly every spokesman of the Pakistani army since 2000 has said that there are few insurgents in Balochistan, we will crush them soon. Time has proven that those statements were false, the Baloch insurgents have become more strong in Balochistan and lethal in their operations against Pakistani occupation. However, the political struggle was crushed with brutal force and the remaining political activists of Baloch pro-independence parties have moved to the countries where they can freely practice their freedom of speech and campaign for the freedom of Balochistan without any fear.

The Baloch nation needs the help of civilised countries and those who are against suppression, slavery, dictatorship and war crimes. Pakistan and China are partners in crime in Balochistan, world must realise China’s presence in Gwadar would be a threat to the western world and especially the European Union. Therefore, western powers and European Union must consider the Baloch nation as their only natural friend in the region and support their valid demand of a free Balochistan at every level and by all means.