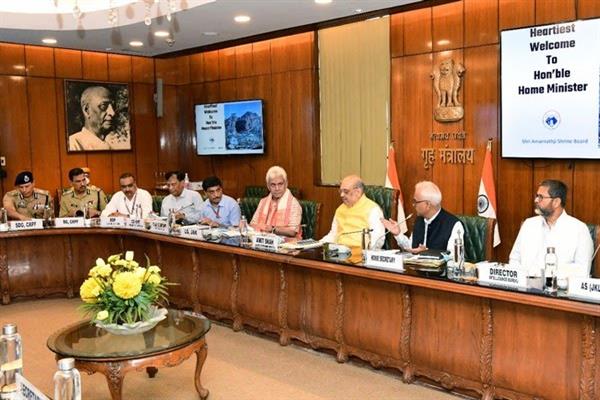 Union Home Minister Amit Shah reviewed the overall security situation in Jammu and Kashmir in the third set of such meetings in the Ministry of Home Affairs.  A fresh meeting began after a short lunch break followed by two back-to-back marathon meetings on Amarnath Yatra, an annual pilgrimage to the 3,880-meter-high cave shrine of Lord Shiva in Jammu and Kashmir, located in the upper reaches of the Himalayas.   National Security Advisor Ajit Doval, Chief Indian Army Lieutenant General Manoj Chandrashekhar Pande, Union Home Secretary Ajay Kumar Bhalla, Jammu and Kashmir Lieutenant Governor Manoj Sinha, and Intelligence Bureau Chief Arvind Kumar attended the meeting.  Central Reserve Police Force (CRPF) Director General Kuldiep Singh, Jammu and Kashmir Chief Secretary Arun Kumar Mehta, Director General of Police Jammu and Kashmir Dilbag Singh, Director General of Border Roads Organisation (BRO) Lt Gen Rajeev Chaudhary also attended the meeting along with other officers from Border Security Force (BSF), Indo-Tibetan Border Police (ITBP) and Ministry of Home Affairs (MHA).  The meeting was organized days after Rahul Bhat, a Kashmiri Pandit, was gunned down in his office in Budgam district in Jammu and Kashmir.  The security of minorities in the valley is learned to be one of the key agendas of the meeting, said sources.  The meeting is significant as the Amarnath Yatra pilgrimage is all set to start on June 30 after a gap of two years.  A heavy security deployment already exists on the ground in Jammu and Kashmir, the Home Ministry, however, plans more stringent arrangements amid several terror threats to the annual pilgrimage.  The deployment will be done keeping in mind the security of pilgrims along the National Highways, including in Pathankot-Jammu and Jammu-Srinagar, besides the two tracks of Baltal and Nunwan, the base camp in Jammu, and other vulnerable areas.  In addition, Radio-Frequency Identifications (RFIDs), drones and anti-drone technologies, and CCTVs have also been installed.Earlier, in two rounds of meetings in the first half of the day on Amarnath Yatra, various issues were discussed.  The first meeting, which started around 11.30 am, lasted for about 45 minutes; wherein logistics, health infrastructure, temporary hospital facility, planning for any emergency situation, road connectivity, and other management of the pilgrimage to the 3,880-meter-high cave shrine of Lord Shiva in Jammu and Kashmir, located in the upper reaches of Himalayas, were discussed, said officials privy to the development.   Issues linked to arrangements in case of a possible landslide on the pilgrimage route, and sudden changes in weather were also among the topics discussed in the meeting, they said. The pilgrimage is held from the twin routes of Pahalgam and Baltal.  The second meeting, which started soon after the first meeting ended, was related to the security of Amarnath Yatra, the deployment of security personnel, threat assessment and other points linked to it. The meeting lasted for about one-and-half hours.  Resuming the Amarnath pilgrimage is a challenging task as Jammu and Kashmir has witnessed several incidences of targeted killings in the last few months by terrorists following which the Ministry of Home Affairs asked security agencies operating in Jammu and Kashmir to enhance counter-terror operations.  However, online registration for Amarnath Yatra 2022 started on April 11 and the Home Ministry has already sanctioned nearly 50 companies of CAPF for the purpose to provide security during the pilgrimage as Jammu and Kashmir is expecting nearly five lakh pilgrims visiting the Amarnath cave shrine this year.   While online registration has already begun, the pilgrimage is scheduled to be held for 43 days between June 30 and August 11.  The Jammu and Kashmir government had cancelled the Amarnath pilgrimage due to the prevailing COVID-19 situation in 2020 and 2021 after a discussion with Amarnathji Shrine Board members.