US accuses China of ‘serious harm’ to workers through trade 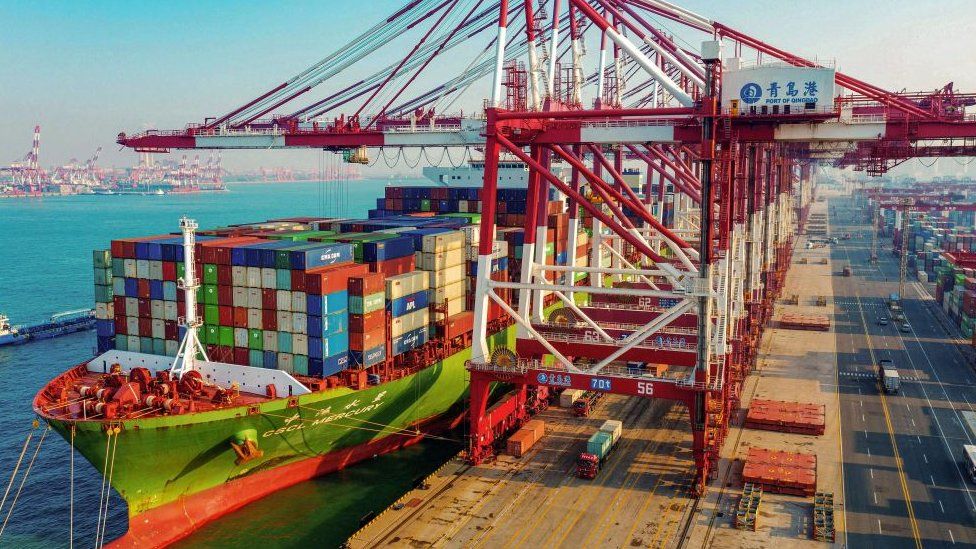 The US has accused China of causing “serious harm” to workers and firms around the world with its trade policies.

The US Trade Representative accused Beijing of repeatedly failing to live up to trade commitments.

It published its annual review of China’s compliance with the deal that gave it membership of the World Trade Organization (WTO) on Wednesday.

China said it is a firm supporter of and important contributor to the WTO.

The US report is the first since President Biden’s appointee Katherine Tai took up office as the top US trade negotiator, and it lays out US concerns about China’s trade policies.

Many of the them are long-standing in Washington and are shared by both Democrats and Republicans.

They include Beijing’s subsidies for industries it deems important, restrictions on foreign companies’ abilities to do business in China and lack of protection for intellectual property rights.

China says it is “building a socialist market economy” that will allow market forces to determine resource allocation and allow the government to “play a better role”.

China’s embrace of a state-led, non-market approach to the economy and trade has increased rather than decreased over time, and the mercantilism that it generates has harmed and disadvantaged US companies and workers, often severely.”

It also points out that the US has won all 27 cases it has brought against China at the WTO, but “meaningful reforms by China remain elusive”.

The trade war which started under former President Donald Trump means that more than half of what the world’s two biggest economies sell each other is subject to tariffs, or import taxes.

Despite this, trade between the two countries soared to $657.4bn (£484bn) last year after struggling through the pandemic. That’s less than $1.5bn short of the record set in 2018.

The trade relationship between China and the US is arguably the most important bilateral relationship in the world.

It matters to all of us, and it’s not going well.

The conclusion drawn in Washington that China is buying less from the US than it was five years ago, rather than $200bn more, shows how difficult it will be to make progress.

And whether you look at bilateral trade ties, or at a multilateral trade forum like the WTO, relations between the two largest economies in the world are a little bit stuck.

There’s not much evidence that the tariffs have helped either side. Nor is there any great prospect that they will be removed any time soon.

Equally, China’s membership of the WTO has not really made it more like the West, and it has certainly had no impact on political freedoms.

These are two very different economic systems and the rivalry between them will help define the 21st Century.

Dennis Shea, who was the US Ambassador to the WTO during Donald Trump’s presidency, told the BBC that failure to achieve lasting change was a driving force behind the trade deal the two sides agreed in 2020.

“We undertook the phase one trade deal to try to exact costs on the Chinese to get their attention and to try to move the needle that way.”

He added: “Interestingly, Ambassador Tai [and] the current administration is still trying to enforce the Phase One deal.”

In that deal, the US reduced some tariffs and China pledged to boost US imports by $200bn above 2017 levels as well as strengthen intellectual property rules.

Chinese government spokesman Mr Liu Pengyu said trade with the US was growing and that the phase one deal was benefitting the US and the rest of the world.

He said any differences could be addressed through dialogue.

“China has been working on joint implementation despite the impact of Covid-19, global economic recession, supply chain disruptions as well as US government’s continuous sanctions and suppression towards Chinese entities,” he said.

China has bought none of those extra goods according to research by Chad Bown of the Peterson Institute of International Economics in Washington.

While the pandemic hasn’t helped, he points out that US farmers and manufacturers have struggled to produce enough goods for the target to be achieved.

Mr Bown told the BBC: “There is no sense in which US-China trade relations will improve anytime soon, but there is also no sense that they are on the verge of getting worse.

“Unlike President Trump, the Biden administration is not threatening a re-escalation of the trade war and imposition of new tariffs on billions of dollars of trade.”