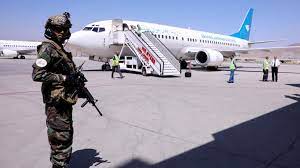 The Hamid Karzai International airport in Kabul has been declared “uncontrolled” by the US Federal Aviation Administration (FAA). A NOTAM (notice to airmen) was issued on Wednesday declaring the Kabul airport “uncontrolled”, barring US civil aircraft from operating over the country unless given prior authorisation.

“All aircraft arriving or departing Kabul airport (OAKB) shall have an approved flight plan at least 24 hours before,” the notice said.

According to the FAA, “a NOTAM is a notice containing information essential to personnel concerned with flight operations but not known far enough in advance to be publicised by other means. It states the abnormal status of a component of the National Airspace System (NAS) not the normal status.”

A similar notice was last issued on August 30 when the last American flight had departed the airport in Kabul minutes before the 31 August deadline.

The notice had declared that “no air traffic control or airport services are available”.

“Aircraft operating into, out of, or through Kabul FIR and landing OAKB should use extreme caution. Aircraft should adhere to standard reporting procedures on CTAF 125.2,” the notice issued on August 30 said.

The US military had assumed air traffic control responsibilities in Kabul earlier in August to facilitate the evacuation of tens of thousands of people from Afghanistan.

The Taliban took control over Afghanistan after seizing the capital Kabul on August 15. The US completed its military withdrawal from Afghanistan on August 30 after a huge but chaotic airlift, ending nearly 20 years of war in the country.