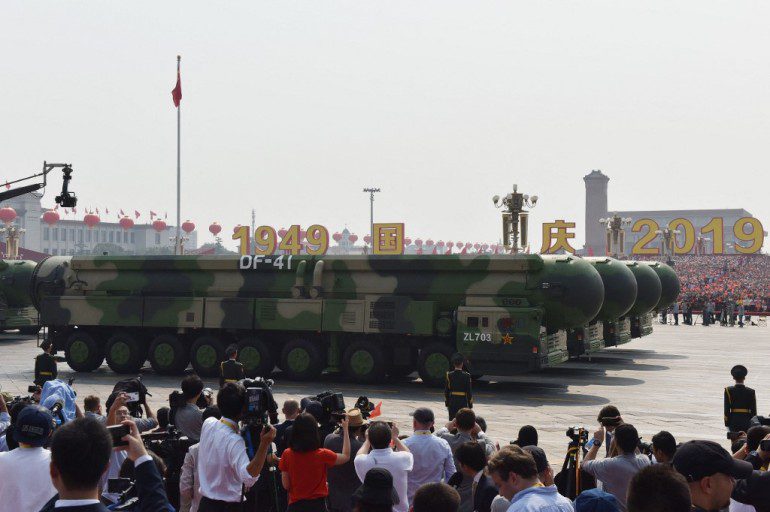 China is expanding its nuclear arsenal much quicker than anticipated, narrowing the gap with the United States, the Pentagon said in a report published.

China could have 700 deliverable nuclear warheads by 2027, and could top 1,000 by 2030 – an arsenal two-and-a-half times the size of what the Pentagon predicted only a year ago, according to the report published on Wednesday.

By comparison, the United States has about 3,750 nuclear weapons and has no plans to increase. As recently as 2003 the US total was about 10,000.

China is investing in, and expanding, the number of its land-, sea-, and air-based nuclear delivery platforms and building the infrastructure necessary to support this major expansion of its nuclear forces

The assessment came in the US Department of Defense’s annual report to Congress on Chinese military developments.

Like the US and Russia, the two leading nuclear powers, China is building a “nuclear triad”, with capabilities to deliver nuclear weapons from land-based ballistic missiles, from missiles launched from the air, and from submarines, it said.

The report said China is likely not seeking a capability to launch an unprovoked nuclear strike on a nuclear-armed adversary – primarily the US – but wanted to deter attacks from others by maintaining a credible threat of nuclear retaliation.

A year ago, the Pentagon’s China report said the country had about 200 deliverable warheads and would double that by 2030.

The acceleration “is very concerning to us”, a US defence official said.

It “raises questions about their intentions”, the official said, calling for more transparency from Beijing over its nuclear force development.

The Pentagon has declared China its principal security concern for the future, as Beijing undertakes to build the People’s Liberation Army into “world-class forces” by 2049, according to its official plan.

China is expanding its air, space and sea forces with the aim of projecting its power globally, much as the US military has for decades.

The rivalry has increased concerns about a possible clash between the US and China, especially over Taiwan, which China claims as its territory but which is closely supported by the US.